Commander of the Order of Military Merit (CMM)

The official description, eligibility, criteria, and history of the Commander of the Order of Military Merit (CMM). 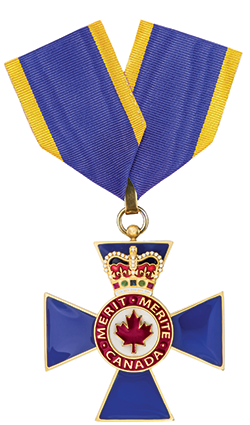 The Order of Military Merit (ORMM) created in 1972 recognizes conspicuous merit and exceptional service by active members of the Canadian Armed Forces.

Appointment to the rank of Commander of the Order of Military Merit recognizes outstanding meritorious service and demonstrated leadership in duties of great responsibility.

The insignia of the order is a blue-enameled, straight-end cross pattée (four arms, narrow at the centre and expanding towards the ends). The badge is edged in gold and bears a red maple leaf in its center, on a white background, surrounded by an annulus enameled red which bears the inscription "MERIT-MERITE-CANADA" in gold, the annulus being surmounted by the Royal Crown enameled in full colours. The reverse is plain with the exception of an inventory number. The Commander's insignia has a small link at the top, to which is attached a larger ring, and the ribbon passes through this for wearing around the neck.

There is no bar to the Order of Military Merit, but one can be promoted within the Order.

The insignia of Commander shall be worn following the Member of the Order of Canada in the sequence prescribed in the Canadian Orders, Decorations and Medals Directive, and in the following manner: worn around the neck, suspended from the ribbon described above.

The lapel badge, a blue cross with a red maple leaf centre, is worn on the undress ribbon.

Elevations within the order are indicated by the wearing of the lapel badge of the current and previous levels on the undress ribbon.

Recipients are entitled to use the post-nominal letters  “CMM”.

As of 31 December 2021, there have been 293 appointments at the Commander level of the Order of Military Merit since its institution in 1972.

Each insignia is numbered on the reverse but not named.

The names of the appointees are published in the Canada Gazette. Appointments are usually announced in December of each year and one cannot be appointed to the Order posthumously.

The insignia was designed by Bruce Beatty, C.M., S.O.M., C.D. and, since 2014, is manufactured by the Royal Canadian Mint at its Ottawa facility.

Members of the Order are authorized to act as Voluntary Presiding Official at Citizenship ceremonies.