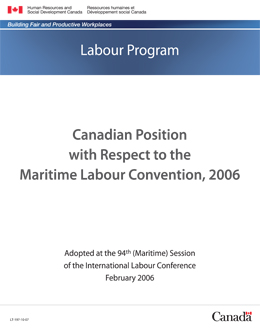 Report Summary: The Maritime Labour Convention 2006 is a comprehensive new labour standard for the world's maritime sector that was adopted at the 10th Maritime Session of the International Labour Conference (ILC). It sets out seafarers' rights to decent working conditions and helps to create conditions for fair competition for shipowners.

The Convention brings most of the existing maritime labour instruments together in a single Convention with a new format and updated language that better reflects modern working conditions in the industry. To facilitate broad ratification, the Convention takes an approach that is " firm on rights and flexible on implementation ".

The Convention also responds to the need for a more effective enforcement and compliance system that would help eliminate substandard working conditions on ships and would work within the well-established international system for enforcement of the international standards for ships safety and security and environmental protection adopted by the International Maritime Organization (IMO).

The purpose of this report is to bring instruments recently adopted by the International Labour Organization (ILO) to the attention of the competent authorities in Canada, as required by Article 19 of the ILO's Constitution.

This report deals with the Maritime Labour Convention, 2006 (MLC, 2006) adopted at the 94th (Maritime) Session of the International Labour Conference in February 2006. It includes a general description of the new instrument and an assessment of the extent to which current Canadian law and practice comply with its provisions.

Background on the ILO

Established in 1919, the ILO became a specialized United Nations (UN) agency in 1946. It is a unique tripartite UN organization with representatives of governments, and workers and employers organizations participating in the development and administration of ILO policies, programs and international labour standards. Canada was among the founding members of the ILO, which currently has 180 member States.

The annual International Labour Conference (ILC), which brings together tripartite delegations from all member States, adopts international labour standards in the form of Conventions and Recommendations.

Conventions become binding instruments once ratified by a member State. Recommendations are non-binding and are not subject to ratification. They provide guidelines to ILO members for the development of national policy, legislation and practice or, where they accompany a Convention, offer guidance on implementation of the provisions of the Convention.

Under the ILO Constitution, all member States are required to bring newly adopted ILO instruments to the attention of the competent authority or authorities, to inform the ILO that this has been done, and subsequently, to report on the position of its law and practice with respect to the matters dealt with by the instruments, when required. In Canada, this obligation is met by tabling a report in Parliament, and where the instruments address issues falling within their jurisdictions, sending copies of the report to the provincial and territorial governments.

A member State has no obligation to ratify a Convention adopted by the ILC, but if it does ratify, it undertakes to implement the provisions of the Convention throughout its territory, and to report regularly to the ILO on its implementation. Reports are subject to review by a Committee of Experts that reports annually to the ILC on the degree of compliance of member States with respect to ratified Conventions.

According to the Deputy Attorney General of Canada, the subject matter of the MLC, 2006 is wholly within federal jurisdiction.

The MLC, 2006 is a comprehensive new labour standard for the world's maritime sector that was adopted at the 10th Maritime Session of the ILC, held in Geneva, Switzerland in February 2006. It sets out seafarers' rights to decent working conditions and helps to create conditions for fair competition for shipowners.

The decision by the ILO to develop this major new maritime labour Convention was the result of a joint resolution in 2001 by international seafarers' and shipowners' organizations, later supported by governments.

The industry partners called on the ILO to develop, as a matter of priority, " an instrument which brings together into a consolidated text as much of the existing body of ILO instruments as it proves possible to achieve in order to improve the relevance of those standards to the needs of all the stakeholders of the maritime sector ."

Many of the existing 68 maritime labour instruments (37 Conventions and 31 Recommendations) adopted by the ILO since 1920 were outdated and did not reflect contemporary working conditions on board ships. In addition, excessive detail in many existing maritime labour Conventions constituted a major obstacle to their broad ratification.

The new Convention brings most of the existing maritime labour instruments together in a single Convention with a new format and updated language that better reflects modern working conditions in the industry. To facilitate broad ratification, the Convention takes an approach that is " firm on rights and flexible on implementation ".

The new Convention also responds to the need for a more effective enforcement and compliance system that would help eliminate substandard working conditions on ships and would work within the well established international system for enforcement of the international standards for ships safety and security and environmental protection adopted by the International Maritime Organization (IMO).

The Convention is organized in three main parts: The Articles, coming first, set out broad principles and obligations. They are followed by the more detailed Regulations and Code.

Article II , Definition and Scope of Application. Except for a few specific exclusions and areas where flexibility is provided for national authorities to exempt smaller ships (200 gross tonnage and below) that do not undertake international voyages from some aspects of the Convention, the MLC, 2006 applies to all publicly or privately owned ships (and to seafarers on those ships) that are ordinarily engaged in commercial activities.

For the purpose of the Convention a seafarer means any person who is " employed or engaged or works in any capacity on board a ship to which this Convention applies ".

The Convention does not apply to:

Articles III and IV set out fundamental rights and principles, and seafarers' employment and social rights.

Article V provides the legal framework for the provisions on compliance and enforcement in Title 5 of the Convention.

The new Convention sets out the basic rights of seafarers to decent work, but leaves a large measure of flexibility to ratifying countries as to how they will implement the standards for decent work in their national laws.

Paragraph 7 of this Article is known as the "no more favourable treatment" clause. This provision, also used in IMO Conventions, means that ships must not be placed at a disadvantage due to the ratification of the new Convention by their country. The practical consequences are clearly set out in the port State control provisions of Title 5 of the Convention, under which ships of all countries, irrespective of ratification, will be subject to inspection in any country that has ratified the Convention, and to possible detention if they do not meet the minimum standards of the new Convention.

Article VIII , Entry into force, provides that the Convention will come into force 12 months after the date on which there have been registered ratifications by at least 30 Members with a total share of the world gross tonnage of ships of 33 per cent.

Article IX , Denunciation. A Member that has ratified the Convention may denounce it after the expiration of ten years from the date on which the Convention first comes into force.

Article X , Effect of entry into force. The Convention revises a list of 37 Conventions.

Articles XI & XII , Depositary Functions. The Director-General of the ILO shall notify all Members of the registration of all ratifications, acceptances and denunciations under the Convention.

Article XIII , Special Tripartite Committee. For matters dealing with the MLC, 2006, the Governing Body of the ILO shall establish a tripartite committee with special competence in the area of maritime labour standards.

Article XVI , Authoritative Languages. The English and French versions of the text of the Convention are equally authoritative.

The Regulations and the Code

The Regulations and the Code (Part A: mandatory Standards and Part B: non-mandatory Guidelines) are organized into general areas under five Titles. Each Title contains groups of provisions relating to a particular right or principle, or in the case of Title 5, enforcement measure.

Title 1 sets out the minimum standards that must be observed before seafarers can work onboard ship: they must be above a minimum age; have a medical certificate attesting to fitness for the duties they are to perform; have training and qualifications for the duties they are to perform on board; and have access to an efficient and well regulated seafarer recruitment and placement system.

Title 2 deals with the terms and conditions of employment including matters such as: the context for signing the employment agreement; the basic minimum terms of employment such as wages, annual leave, repatriation and the requirement that ships have a sufficient and qualified personnel on board to provide a safe and secure work environment.

Title 3 covers accommodation, recreational facilities, food and catering. These shipboard matters are to be addressed in the maritime labour certificate and declaration of labour compliance and are subject to the related inspections and monitoring described in Title 5.

Title 4 covers both onboard and onshore matters. It addresses access to and financial responsibility for medical care, health protection, welfare onshore and social security protection.

Chapter 4: Canadian situation with respect to the MLC, 2006

There is a high degree of conformity of Canadian laws and practices with the MLC, 2006. Most of its provisions are implemented through the Canada Labour Code and the Marine Occupational Safety and Health Regulations and the Canada Shipping Act, 2001 (CSA, 2001) and its regulations, or through collective agreements between Canadian shipowners and unions representing seafarers.

Effective July 1, 2007, the MLC, 2006 has been added to Schedule 1 of the CSA 2001. This will enable Transport Canada to implement provisions of the MLC, 2006 through its new Marine Personnel Regulations, which were developed in consultation with the marine community, including representatives of Canadian shipowners and seafarers, under the umbrella of the Canadian Marine Advisory Council.

A review of the Canada Labour Code's Marine Occupational Safety and Health Regulations is ongoing with a view to ensuring compliance with relevant provisions of the MLC, 2006. In addition, new Shipbuilding and Accommodation Regulations are being developed under the CSA 2001.

Once the regulatory framework is in place and a comprehensive analysis of compliance has been completed, consideration will be given to the ratification of the MLC, 2006 by Canada.

The following appendices have the wording of the original documents, the majority of which are hosted on the International Labour Organization's website.

Letters of Justice Canada regarding the appropriate legislative jurisdiction in Canada for the Maritime Labour Convention, 2006

Deputy Minister of Justice and
Deputy Attorney General of Canada

I refer to your inquiry regarding appropriate legislative jurisdiction in respect of the Maritime Labour Convention, 2006, a consolidated convention on labour standards for seafarers, adopted by the Internatioal Labour Conference at it's 94th (Maritime) Session (February 2006).

I can advise that the subject matter of the Convention is, wholly within federal jurisdiction and therefore no provincial action is necessary.

Total Vote: (All voting delegates at the Conference)