September would have been a dry month for most of the region if not for two storms that brought heavy rainfall. Due to the storms, some areas ended September with nearly three times their normal rainfall. On September 11, a slow-moving low pressure system dropped up to 100 mm (4 in.) of rain, with the greatest amounts in southern New Brunswick. Along the Bay of Fundy coast, local rainfall rates exceeded 35 mm (1.4 in.) per hour. The storm caused flash flooding in Fredericton and Saint John. From September 29 to October 1, tropical moisture fueled a stalled front and low pressure system, which dumped 100 mm (4 in.) to 250 mm (10 in.) of rain on parts of Maine, New Brunswick, and Prince Edward Island. Local rainfall rates were around 35 mm (1.4 in.) per hour. Numerous roads and bridges were washed out or closed. More than 400 New Brunswick locations were damaged, with some roads still closed as of early December. The Department of Transportation and Infrastructure estimated repairs would top $15 million in the province. Coastal flooding was made worse by high tide in Portland, ME, which had its 2nd all-time wettest September day. The heavy rain also caused the Maine coast to be closed to shellfish digging. In addition, wind gusts up to 119 km/h (74 mph) downed trees, leading to tens of thousands of power outages. Several New Brunswick and Maine schools were closed.

A powerful storm associated with the remnants of Hurricane Patricia brought strong winds and heavy rain to the region from October 27 to 29. In Washington County, ME, sustained winds of 64 km/h (40 mph), with gusts to 106 km/h (66 mph), were reported. Downed tree limbs led to power outages for more than 25,000 customers in Maine, New Brunswick, and Nova Scotia. Strong winds, large waves, and high tides resulted in flooding and erosion along the Bay of Fundy coast. A barge flipped over in high waves near Saint John, NB. Rainfall from the event totaled up to 100 mm (4 in.).

Eleven high temperature records were set in New Brunswick on September 7, while Boston, MA set record highs on the 8th and 9th. Woodstock, NB and Portland, ME had their warmest Septembers on record. November’s warmth contributed to New Brunswick receiving only 26% of normal snowfall for the month, Caribou, ME seeing only 36% of normal snowfall, and many other U.S. sites receiving no measurable snow.

The 2015 Atlantic hurricane season featured eleven named storms, which was below average. However, four named storms entered the Canadian Hurricane Centre Response Zone, which was near the annual average. 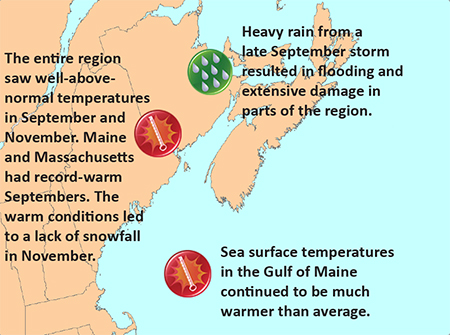 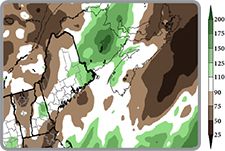 Autumn sea surface temperature anomalies in the Gulf of Maine were substantially warmer than the autumn long-term average over the entire study area. Temperatures over coastal areas were 0.5°C (0.9°F) to 1.0°C (1.8°F) above normal, strongest in the Massachusetts Bay region and weaker off mid-coast Maine and in the Bay of Fundy. Anomalies were up to 2.0°C (3.6°F) warmer than normal over deeper basins in the central Gulf of Maine and the Scotian Shelf off southern Nova Scotia. The persistent above-normal ocean temperatures have had impacts on several species. More information can be found in the Impacts section on the next page. 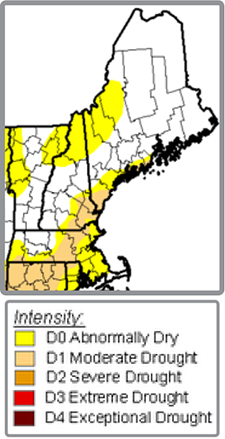 Abnormal dryness and moderate drought, which began in spring and continued through summer, lingered through fall in parts of Maine, New Hampshire, and Massachusetts. Falling water levels in wells, reservoirs, lakes, and waterways led to voluntary water restrictions in several New England towns. In late September, two Maine counties were declared natural disaster areas due to damages and losses caused by drought.

Prolonged warmth in September delayed the onset of the fall foliage season by up to two weeks for the entire region and extended the growing season in New Brunswick. Weather conditions were generally good for field work and harvest. The warm temperatures helped pumpkins ripen early in some areas, but delayed color development in cranberries and a few apple varieties. The warmth also delayed the Maine potato harvest by a few days as it was too warm to store potatoes. Many crops, especially pumpkins, apples, and potatoes, were expected to be abundant and of high quality.

The U.S. Drought Monitor from December 10 showed continuing areas of abnormal dryness and moderate drought in the three states.

Global sea surface temperature trend from 2004-2013. The black box on the map shows the location of the Gulf of Maine. Credit: Andy Pershing, Gulf of Maine Research Institute

The rapid warming in the northwest Atlantic has been linked to changes in the distribution of many ocean species. Over the last several years, scientists have reported seeing fewer critically endangered right whales in their traditional feeding grounds in the Bay of Fundy. Right whales come to the Gulf of Maine to feed on a particular cold-water zooplankton species, leading to speculation that warm waters may have reduced the abundance of the whales’ favorite food. Fishing and shipping regulations in the Gulf of Maine have been designed to protect whales. During summer 2015, scientists searching for right whales outside their traditional feeding grounds found a surprising number of the whales in the Gulf of St. Lawrence.

Atmospheric and oceanic observations through November reflect a strong El Niño. The time series above shows warm and cold periods of sea surface temperatures in the Niño 3.4 region of the central Pacific. When comparing these, this El Niño ranks as one of the strongest on record. El Niño conditions will persist into early 2016 before weakening and transitioning to ENSO-neutral conditions by late spring or early summer.

Other factors can also affect winter conditions, such as climate variability associated with the Arctic Oscillation and the North Atlantic Oscillation. These patterns are less able to be forecasted far in advance compared to El Niño, meaning that it is uncertain as to how much they will affect the upcoming winter season. 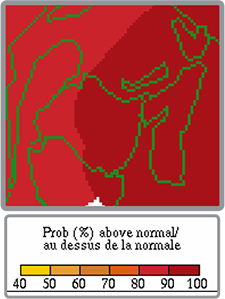 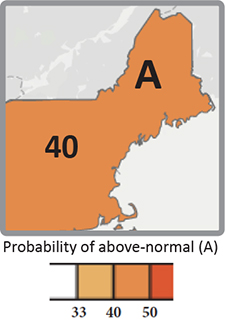 For December through February, Environment Canada and NOAA’s Climate Prediction Center are both calling for an increased chance of above-normal temperatures for the Gulf of Maine region.