Above-normal snow depth lingered through March and April across the region. New Brunswick’s average snow depth at the end of March was five times normal. The Saint John airport had over 1 m (3 ft) of snow on the ground by March 31 compared to the normal 5 cm (2 in.). Several U.S. sites ranked their average March snow depth among their top five all-time greatest. The combination of snowpack and additional March precipitation contributed to multiple roof collapses throughout the region. At the end of April, Bas Caraquet, NB, still had record-deep snow, with 76 cm (30 in.) on the ground compared to the normal 2 cm (1 in.). Saint John, NB, and Charlottetown, PEI, had their greatest total snowfall (November-April) on record.

In mid-April, ice jams caused flooding in northern Maine and northwestern New Brunswick. Multiple roads were closed in both areas. A mandatory evacuation order was put in place in Perth-Andover, NB, for two days, with a state of emergency also in place for several days.

The abundant snow that fell during winter had near- to below-normal water content in many areas; therefore, overall winter precipitation was near to below normal. Despite multiple storms, spring precipitation was also below normal. Dry conditions led to moderate drought in parts of New England and to abnormal dryness in parts of New Brunswick in May. 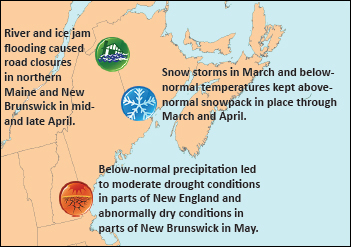 Spring sea surface temperatures in the Gulf of Maine were colder than normal by as much as 1°C (1.8°F) over all shallow coastal regions, especially along the Maine and New Brunswick coasts, southwest Nova Scotia, and Minas Basin. Cold anomalies were also present offshore in the central Gulf of Maine south of Penobscot Bay and over most of the Scotian Shelf. These cold anomalies continued from the strong winter cooling that started in February. Surface water over deeper basins in the Gulf of Maine (Wilkinson and Jordan Basins) still had weak [around 0.5°C (0.9°F)] warm anomalies left over from the strong warm anomalies that were present throughout 2014 and even into winter 2015. 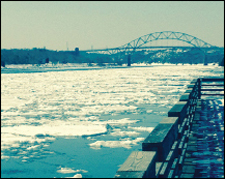 Snow cover remained in place later into spring than normal for much of the region. The start of the growing season was delayed by up to a month, as many fields were too wet or still snow-covered in April. The late spring also contributed to above-average tree pollen counts, leading to a shortened but concentrated allergy season. In April and May, sea ice and frozen harbors around Prince Edward Island, northern Nova Scotia, and western Cape Breton delayed the start of the spring lobster and snow crab seasons by up to 11 days. Shellfish harvesters and ferry services were also delayed by the ice. In Maine, the ice fishing season was extended, but the start of the open water fishing season was delayed.

Nova Scotia’s above-normal snow cover made it difficult for migratory birds and wildlife to find food, causing some to become weak or die. A late snowmelt in northern New England cut short the development period for amphibians that hatch in pools created by melted snow and need several months to grow legs before these pools dry up. Above-normal snowfall likely insulated blacklegged (deer) ticks, which transfer diseases to humans.

Lingering snow cover caused Nova Scotia golf courses to open several weeks late and the Portland Sea Dogs baseball team to postpone their first two games of the season. In Prince Edward Island, snow cover and wet conditions made many seasonal roads impassable and delayed the opening of campgrounds and trails in some provincial parks. The harsh spring kept real estate agents from showing cottages in PEI and delayed new home construction in Nova Scotia. Spring weight restrictions were extended by a week in parts of the Maritimes so roads could recover from frost heaves.

Percent normal stream flow map for May from U.S. Geological Survey. Red indicates much below normal (less than 10%), orange indicates below normal (10-24%), and green indicates normal (25-75%).

Maine, New Hampshire, Massachusetts, and northern New Brunswick were abnormally dry during spring due to a continued lack of precipitation. By late May, moderate drought conditions were present in Massachusetts, southern New Hampshire, and part of southern Maine. Stream flows were much below normal in these areas. Topsoil moisture as of May 31 was rated short or very short in 51% of New Hampshire. U.S. Department of Agriculture crop reports indicated that plant growth was slow due to lack of moisture, with some farmers already irrigating. The dry conditions also contributed to multiple wildfires in Maine and New Hampshire. Wildfires were also reported in Nova Scotia and New Brunswick. Precipitation in early June helped ease dryness in some areas.

Environment Canada map produced on May 31.

EC: Equal chances of above-, near-, or below-normal

Environment Canada and NOAA’s Climate Prediction Center are both predicting equal chances of above-, near-, or below-normal precipitation for June through August.

Drought conditions were expected to improve during summer in Massachusetts, southern New Hampshire, and southern Maine. According to the Climate Prediction Center, conditions should improve “due to the proximity of the summer storm track, and the overall historical tendency for above-median precipitation during the past 10 to 15 summers.”

During May, ongoing and strengthening El Niño conditions were observed in the equatorial Pacific. NOAA’s Climate Prediction Center says there is a 90% chance of El Niño continuing through fall, with an 85% chance of it continuing through winter. El Niño impacts in the region are generally weak or insignificant, especially during summer. However, El Niño does impact hurricane activity.

While the 2015 Atlantic hurricane season got an early start with Tropical Storm Ana in May, NOAA is predicting that the season will likely be below normal. There is a 70% chance of 6-11 named storms. Of the named storms, 3-6 could become hurricanes, with 0-2 of those becoming major hurricanes. The main driver of the forecast is El Niño, which is expected to help suppress hurricane development.