Extremely cold air dominated the region in February. Monthly average temperatures were colder than normal by as much as 8°C (14.4°F). Many sites (including Concord, NH; Portland, ME; Saint John, NB; and Yarmouth, NS) ranked the month as the coldest or one of the coldest Februaries on record, and some even cited it as one of their coldest months ever. While Fredericton, NB, normally sees 11 days above freezing in February, this February the site only had one day above freezing. The combination of cold air and strong winds produced some extreme wind chills across the region.

Multiple major storms, including three blizzards, moved through the region in February. On the 15th, a particularly strong nor’easter, with winds of up to 108 km/h (67 mph), caused up to 15 hours of blizzard conditions and coastal flooding. The storm also dropped up to 66 cm (26 in) of snow. Another nor’easter in late February produced snow rates of up to 9 cm (3.5 in) per hour, with snow totals up to 50 cm (20 in). Many areas saw 200% to 600% of normal snowfall in February, with sites such as Halifax, NS, and Saint John, NB, having their snowiest or one of their snowiest Februaries on record. Parts of New Brunswick had up to five times the normal snow on the ground, with Saint John having its greatest February snow depth on record. Boston, MA, received 164.6 cm (64.8 in) of snow during the month, which is more than the city normally gets in an entire snow season. The site set many records including all-time snowiest month, snowiest February, snowiest winter, snowiest year, greatest snow depth, and greatest number of 30+ cm (12+ in) snowfalls.

Several intense storms struck the region in January. From January 26 to 28, a blizzard with hurricane-force wind gusts up to 130 km/h (81 mph) dropped up to 91 cm (36 in) of snow. The storm caused wave heights of 9 to 12 m (30 to 40 ft) in the Gulf of Maine and significant coastal flooding in Massachusetts. By the end of January, some sites had seen more than double their normal snowfall, while the average snow cover for New Brunswick was 32% above normal.

With generally mild conditions in December, most storms featured a mix of precipitation types. On December 3 in New Brunswick, up to 8 hours of freezing rain occurred in Bathurst and slippery conditions caused dozens of accidents across the province. A slow-moving storm from December 9 to 12 brought 102 to 152 mm (4 to 6 in) of rain, up to 57 cm (22 in) of snow, and a coating of ice. Roads were closed in several areas due to flooding. On December 25, many locations had record or near-record warmth as high temperatures rose to 17°C (63°F). Coastal New England, southern New Brunswick, and much of Nova Scotia saw less than 25% of normal December snowfall. 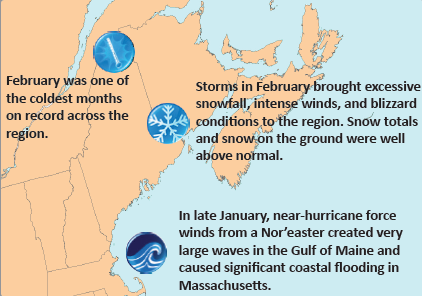 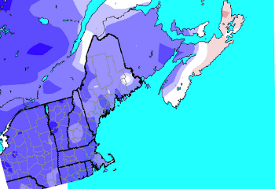 Temperature and precipitation normals based on 1981-2010. 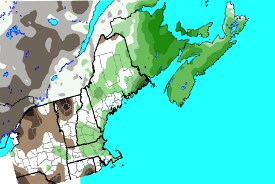 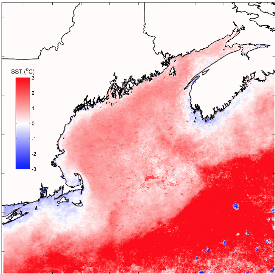 Warm sea surface temperature anomalies that were present throughout the region in fall persisted in most areas through winter. Temperatures (averaged over December, January, and February) were up to 1°C (1.8°F) above normal over the entire region except in the shallowest areas near shore. Strong region-wide warm anomalies in December weakened only slightly in January. These warmer than normal sea surface temperatures may have helped intensify storms during winter. The three-month winter average hides the fact that in February, ocean cooling created negative anomalies over shallow coastal areas, the Jordan Basin, the northern Bay of Fundy, and the Scotian Shelf in response to the cold air temperatures. 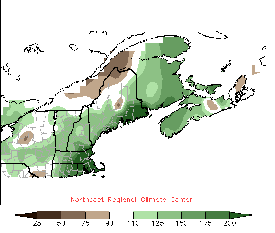 Snow totals varied widely in December, but in late January and February, a persistent trough over eastern North America allowed Arctic air and numerous storms to move through the Gulf of Maine region. With back-to-back storms and persistent cold, snow accumulated quickly (see daily snowfall accumulation chart). Snow removal was difficult, especially for cities such as Boston, MA, and Saint John, NB, which each hauled away at least 20,000 truckloads of snow from their streets. Some municipalities in the U.S. received exemptions to dump snow directly into bodies of water, a practice not normally permitted. The cost of snow removal made this winter the most expensive year ever for some areas.

The snowstorms caused frequent school and business closures, thousands of flight delays and cancellations, and power outages, while the weight of the snow caused roofs to collapse. It was estimated that the snowstorms cost Massachusetts’ economy at least $1 billion. The snow also contributed to many accidents, including one of the largest chain-reaction crashes in Maine’s history on February 25. Frigid temperatures resulted in water main breaks and frozen pipes.

Ice buildup in waterways made navigation difficult, slowed commerce, damaged pilings and docks, forced ferry services to be suspended, and cracked the hull of a Coast Guard cutter. The weather also had significant impacts on the lobster fishing season in Grand Manan, NB, as well as three aquaculture sites in Nova Scotia. Railroad freight deliveries were delayed due to snow-covered side tracks and the need to use shorter trains. The Massachusetts Bay Transportation Authority (MBTA) rail service shut down for several days and experienced delays throughout February. The MBTA estimated that storm-related costs added up to $36.5 million. In Eastern Passage, NS, thousands of vehicles awaiting rail transport became encrusted in ice, making them impossible to move and causing delays for customers.

The start of maple season was delayed by up to a month across the region as cold and snow kept sap from running. Spring planting was also delayed for some Nova Scotia growers due to damaged greenhouses.

Ski resorts benefited from the cold and snow, though. Sugarloaf, in Carrabassett Valley, ME, anticipated its best season ever with respect to traffic and revenue. As of mid-February, the resort had seen a 10% increase in total skier visits and a 14% increase in revenue since last year.

NOAA’s Climate Prediction Center is forecasting equal chances of above-, near-, or below-normal temperatures from March through May for Maine, New Hampshire, and Massachusetts.

Environment Canada and NOAA’s Climate Prediction Center are both predicting equal chances of above-, near-, or below-normal precipitation for the Gulf of Maine region. 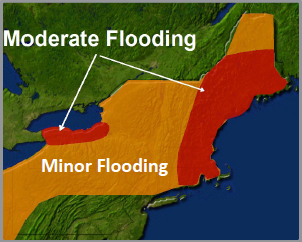 Heavy rainfall can cause river flooding at any time, even in areas where the flood potential is considered low. Local river forecasts can be found the Northeast River Forecast Center.

Gulf of Maine Council on the Marine Environment, Climate Network