Severe thunderstorms affected parts of the region during summer. Two EF-0 tornadoes touched down in Massachusetts on June 23. A microburst in Albion, ME on July 28 damaged buildings, trees, and crops. Two days later, an EF-0 tornado touched down in Warner, NH. On August 4, a waterspout was reported in Boston Harbor and an unconfirmed EF-0 tornado in Five Islands, NS caused property damage. On the same day, large hail fell in New Brunswick and the three states, including a 6.4 cm (2.5 in.) hailstone near Waterboro, ME. Lightning knocked out power to tens of thousands of customers in Halifax, NS on August 22 and 23. Also on the 22nd, 40.8 mm (1.61 in.) of rain fell in one hour at Cheticamp, NS, leading to flash flooding and the evacuation of a campground in Cape Breton Highlands National Park. For more details, see the Regional Impacts section.

With a high of 9.4°C (49°F) on June 1 and 2, Boston, MA, tied its coolest maximum temperature for any given June day. In July, the region experienced a wide range of above-normal and below-normal temperatures. During a cold stretch from July 19-25, several Maritime communities were more than 5°C (9°F) below normal, with records set for lowest maximum temperature. This was followed by a warm August. Caribou, ME, was record-warm at 2.6°C (4.6°F) above normal. The site set a record for greatest number of consecutive days with a maximum temperature of 27°C (80°F) or higher from August 14-23. During the same time period, New Brunswick experienced a heat wave, with humidex values near 40°C (104°F). See figure below. 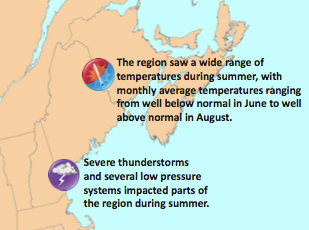 June was quite cool regionwide, with monthly average temperatures generally 1°C (1.8°F) to 3°C (5.4°F) below normal. Maine had its 15th coolest June on record. July temperatures ranged from near normal to 2°C (3.6°F) below normal. The coolest areas were in parts of Maine and the Maritimes. August was very warm, with temperatures up to 4°C (7.2°F) above normal. The warmest areas were in central New Brunswick and western Prince Edward Island. The three states ranked this August among their top 11 warmest. With a cool June, variable July, and warm August, summer temperatures averaged out to be near normal for most of the Gulf of Maine region.

Summer sea surface temperature anomalies in the Gulf of Maine reflect both summer circulation processes and residual warm water masses from previous time periods. Temperatures over most regions were up to 1°C (1.8°F) above normal, most strongly over the deeper basins offshore and the Scotian Shelf. These reflect continuing warm water masses from the spring and previous summer. A distinct region of cold anomalies (up to 1°C (1.8°F)) from Penobscot Bay to Cape Cod reflects anomalously strong flow of water out of the cold Eastern Maine Coastal Current into the western Gulf. This flow is separated from the coast by warmer temperatures in shallow regions. Cooler anomalies were also present in much of the Bay of Fundy. 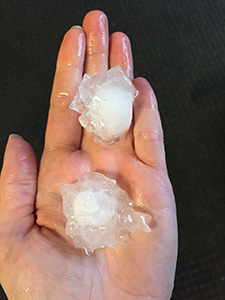 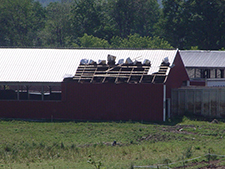 Damage from a microburst on July 28 in Albion, ME. (Credit: John Jensenius)

New Brunswick had nine severe thunderstorm events this summer, compared to the average six events (based on 1989-2006). The province also had six large hail events, which is more than double the average. Severe weather activity varied by location and by month in the rest of the Maritimes. In the three states, overall severe weather activity was below average in June, varied by area in July, and was above average in August. Massachusetts had two tornadoes in June, which was above average, while Maine had none, which was below average. New Hampshire does not usually see any tornadoes in July, but had one this year. The other states saw below average activity. No tornadoes were reported in August, which is normal. 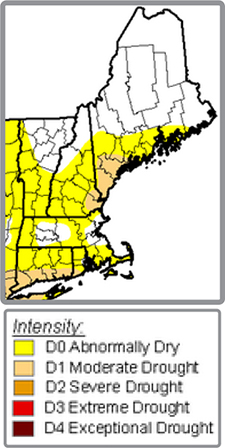 The three states entered the summer season with areas of abnormal dryness and moderate drought already in place. The region’s precipitation pattern during summer consisted of heavy bursts of rain with extended periods of dryness in between. While the rain in June helped ease dryness for some areas, dry conditions lingered for Cape Cod, southeastern New Hampshire, and parts of southern Maine. With the region receiving spotty rainfall in August, abnormal dryness and moderate drought were expanded in parts of the three states by early September. According to U.S. Department of Agriculture crop reports, farmers had to irrigate crops in areas that received little rainfall.

Monthly sea surface temperature anomalies, averaged over the whole Gulf of Maine, for the 34-year period since accurate satellite measurements began in 1982. Credit: University of Maine School of Marine Sciences

Data show that since 2009, with the exception of the cold winter of 2015, the region has experienced almost continuous positive monthly anomalies, with a peak in 2012. Anomalies turn positive again in the summer of 2015. The positive peaks in 2010, 2012, and 2014 are the largest departures from average over the 34-year period. The sloped line in the figure above shows the average trend, which is +0.36°C (0.64°F) per decade. The recently released Northwest Atlantic Regional Climatology, which covers the Gulf of Maine, includes long-term annual, seasonal, and monthly mean temperature and salinity fields on different depth levels with three resolution options. 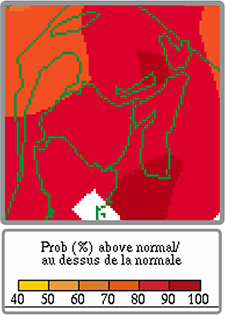 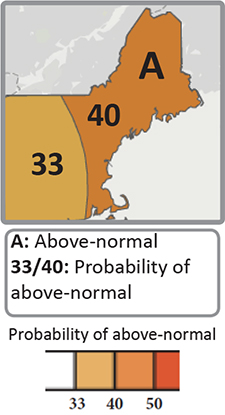 Atmospheric and oceanic conditions during August reflected a strong El Niño. The Climate Prediction Center said there is a 95% chance of El Niño continuing through winter. Models predict one of the strongest El Niños on record, peaking in late fall or early winter, then gradually weakening through spring 2016. El Niño’s impacts during autumn in the Gulf of Maine region are not strong.

According to the Climate Prediction Center’s updated outlook issued in early August, there is a 90% chance of a below-normal 2015 Atlantic hurricane season. The increased confidence level, the highest since hurricane outlooks began in 1998, is based on a strengthening El Niño and cooler-than-average tropical Atlantic sea surface temperatures. The outlook calls for 6-10 named storms, with 1-4 of those becoming hurricanes, and 0-1 of those becoming major hurricanes. In comparison, a normal hurricane season averages 12 named storms, including 6 hurricanes, with 3 of those becoming major hurricanes. As of mid-September, there have been eight named tropical systems in the Atlantic basin. Three of those entered the Canadian Hurricane Centre (CHC) Response Zone, although they remained well east of the Gulf of Maine region. On average, four named tropical systems per year enter the CHC Response Zone.