An Ice Shelf is a floating ice sheet of considerable thickness (20 m and more) showing 2 m or more above sea level, attached to the coast. They usually have great horizontal extent (many square km) and a level or undulating surface.

All of Canada's ice shelves are within the bays and fjords along the northern coast of Ellesmere Island in Nunavut. 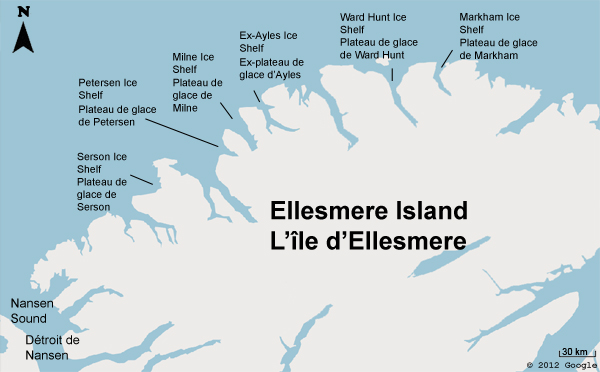 Arctic ice shelves form through the seaward extension of one or more glaciers and/or through the formation of multiyear landfast sea ice. The floating ice mass thickens further through snow accumulating on the surface and by accretion at the base of the ice shelf. An ice island forms when the margin of the ice shelf detaches and becomes free floating in a process called calving.