The Ward Hunt Ice Shelf is located on the northeast coast of Ellesmere Island in Nunavut, Canada, approximately 800 km from the North Pole.

Ward Hunt Ice Shelf has existed for over 3000 years. However, by the summer of 2002 dramatic changes were beginning to take shape. In August of 2002 several iceberg sized pieces of the shelf calved off. By September of the same year, a large fracture had formed in the ice shelf, effectively cutting it in two although the ice did not become mobile.

In the winter of 2007/2008, IPY scientists detected a new fracture using high-resolution radars imagery. The newly detected fracture ran parallel and to the east of the original 2002 fracture. During a joint IPY-JTFN expedition, scientists visited the ice shelf and discovered that it was essentially fractured into three main pieces. The ice between these fractures is now unstable.

In July 2008 two ice islands calved from the Ward Hunt Ice Shelf. The calving was aided by a period of southerly winds over the ice shelf. These winds helped develop an open water lead which the ice islands moved into. According to Dr. Derek Mueller, one of the IPY scientists studying the ice shelf and its break-up, the first calving took place on July 22, 2008. A chunk of ice approximately 4x2km broke off to the northwest of the unstable section of the ice shelf. The calving of the second and larger ice island happened on July 24, 2008. This larger calving came from within the unstable section between two large fractures and produced an ice island that is 7x2km in size. The ice islands comprise only a fraction of the remaining unstable ice between the fractures in the Ward Hunt Ice Shelf. 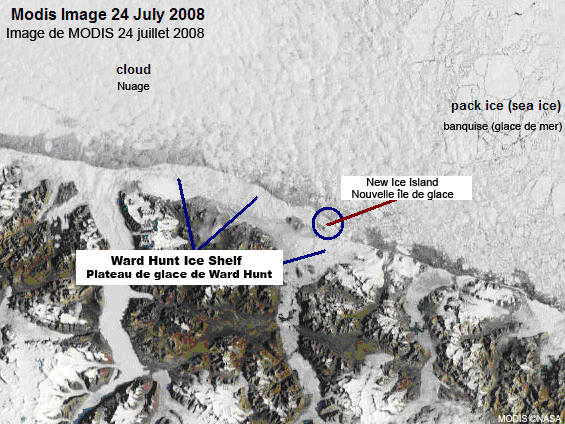 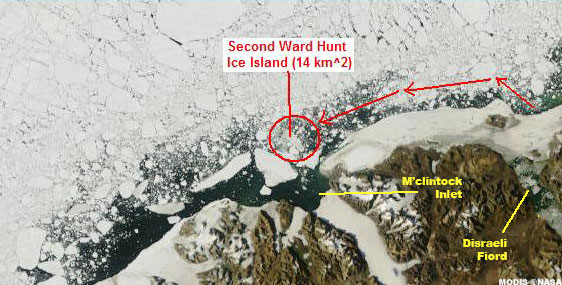 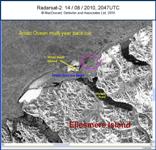 On August 7 and 14, 2010, large new fractures developed in the central and north-eastern parts of the Ward Hunt Ice Shelf (on the north coast of Ellesmere Island). 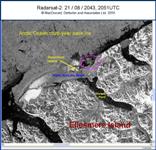 RADARSAT-2 images from August 7 and 14, 2010, showed that new fractures had developed in the central and north-eastern parts of the Ward Hunt Ice Shelf, which is located on the north coast of Ellesmere Island, the northernmost island in the Canadian Arctic Archipelago (CAA).

The beginning of the break-up of part of the ice shelf was evident on the morning of August 18, 2010.

By August 20, 2010 a significant portion of the northeast quarter of the ice shelf had fractured away (~50 km2). Further loss to the ice shelf and the creation of new ice islands are expected to occur before the end of the 2010 melt season, which normally occurs in mid-September.