Lightning is a common meteorological hazard in Canada, which regularly kills and injures people. Based on an analysis of media reports, vital statistics, hospital admission and ER records, and fire loss data, it is estimated that each year on average in Canada, there are between nine and 10 lightning-related deaths and up to 164 lightning-related injuries.

Despite this, deaths due to lightning have declined significantly over the past century. Canadian vital statistics show that lightning-related deaths have fallen from a peak of 2.4 deaths per million population in 1931-1935, to 0.11 deaths from 1999-2003. This observation is consistent with trends in other developed countries.

The majority of lightning-related fatalities and injuries in Canada occur in Ontario. Over 90 per cent of lightning deaths reported in vital statistics since 1921 have occurred in Ontario, Quebec, Saskatchewan, Alberta and Manitoba. With the exception of British Columbia, where few deaths have been recorded, the amount of fatalities reflects the current provincial populations and frequency of cloud-to-ground lightning strikes.

Most lighting-related fatalities and injuries occur during the summer season (June to August). More than 94 per cent of lightning-related deaths and 74 per cent of injuries reported in the media since 1986 have occurred between June and August. 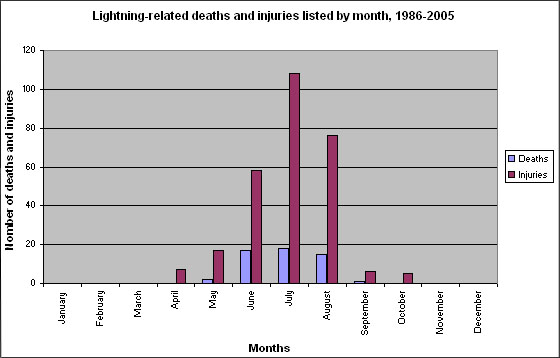 In terms of which weekdays see the most lightning-related injuries and fatalities, the Thursday to Saturday period accounted for almost 55 per cent of all fatalities and over 70 per cent of all injuries from 1986-2005. This is most likely related to higher rates of outdoor activity during this traditional “weekend” period. 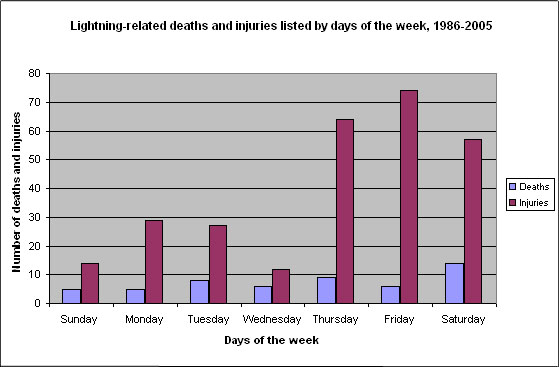 It has also been found that most victims are male, less than 45 yeas old, and are engaged in outdoor recreational activities when they are injured or killed in a lightning incident. 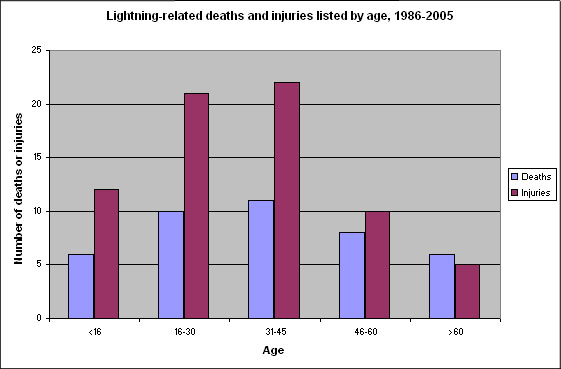 Outdoor recreation has accounted for over 70 per cent of those killed and over 62 per cent of injures. Campers and hikers have been among those most commonly affected by lightning, while golfing, picnicking and boating were also common. Results from other studies also show that sports such as soccer and baseball are often associated with multiple casualty lightning incidents. The bulk of fatalities for all of these activities (68 per cent) and injuries (68 per cent) occurred to people who were in open areas or to those taking shelter under trees. 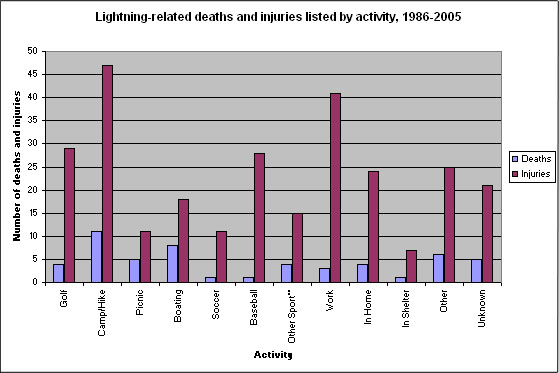 Please note: all of this information is based on material collected from the following paper: