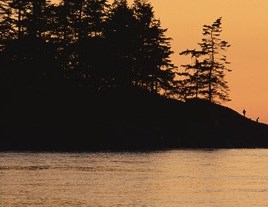 Eleanor Island National Wildlife Area (NWA) is an important nesting and loafing site for colonial waterbirds, providing refuge for young nestlings from predators and easy access to prey in nearby waters. It is a small, 0.81 hectare (ha) island, located approximately 1.6 kilometers (km) from the mainland in southern Lake Muskoka, Ontario. The island is composed of solid granite outcroppings around the perimeter and mixed coniferous forest in the interior. It supports one of the few gull and heron nesting colonies in the local area.

Despite its small size, large numbers of colonial waterbirds breed in the spring and rest on the island through the summer. The mature trees on the island shelter up to 30 nesting Great Blue Heron pairs. The smaller shrubs and grasses provide ideal nesting locations for the gull colonies, with the island being able to support up to 200 Herring Gull pairs and 300 Ring-billed Gull pairs. In recent years, Double-crested Cormorants have also nested in the mature trees on the island. During a visit to the island in 2002, Canadian Wildlife Service (CWS) staff recorded 238 Double-crested Cormorant nests and 30 Great Blue Heron nests within the trees, as well as 266 Herring Gull nests on the ground. There are no documented species at risk on Eleanor Island NWA.

Eleanor Island was transferred from the Corporation of the Township of Muskoka to the CWS in 1970, and in 1971 was designated as a Migratory Bird Sanctuary (MBS) to protect colonial-nesting waterbirds. In 1978, Eleanor Island was designated as an NWA to afford greater protection for colonial-nesting waterbirds and their habitat, and to serve as a site for long-term research.

More information on Eleanor Island NWA is provided in the summary table below.

NWAs are protected and managed according to the Wildlife Area Regulations under the Canada Wildlife Act. The primary purpose of NWAs is the protection and conservation of wildlife and their habitat. For this purpose, and according to the legislation, Environment and Climate Change Canada can prohibit all activities in a NWA that could interfere with the conservation of wildlife. Consequently, most NWAs are not accessible to the public and all activities are prohibited. Nonetheless, Environment and Climate Change Canada has the ability to authorize some activities, whether through public notice or the issuance of permits, as long as these are consistent with the management plan goals for the NWA. For more information, consult the NWAs Management and Activities section.

Public access to island is not permitted except by Canada Wildlife Act permit for research and monitoring. Recreational use is limited to bird watching from offshore.

More information on access and permitting for Eleanor Island NWA can be obtained by contacting the Environment and Climate Change Canada regional office.

This map is for illustrative purposes only and should not be used to define legal boundaries. Eleanor Island NWA can also be viewed using Google Maps. Please note that the Google map is a complementary source of information and does not represent the official map or site name.