Belugas are circumpolar in their distribution, being found in Alaskan, Canadian, Greenlandic, Norwegian and Russian waters. They are found in the Arctic as far north as 82°N, in the Pacific sub-Arctic, as far south as Cook Inlet, Alaska (60°N), and, on the Atlantic side, in the Canadian St. Lawrence Estuary further south to 47°N.

Sixteen populations of beluga whale were previously tentatively enumerated for the world-wide range in the Nearctic, based primarily on geographic distribution during the summer months (Donovan 1992). More recently, and in light of behavioural, genetic and contaminant signatures a total of 22 possible populations have been enumerated (Martin and Reeves 2000).

Many of these populations, which maintain distinct or contiguous geographical ranges during the summer months, mix together during the spring and autumn migrations and share common wintering quarters in areas of light ice or in reoccurring polynyas.

Considerable new information on the range of several of the seven previously designated Canadian beluga populations (Fig. 2) has been gained in recent years by the tagging of animals with satellite linked transmitters and from more intensive aerial surveys. The documentation of traditional knowledge of Inuit hunters (ATK) also has added to the information of movements and migrations of these populations.

This is centred on the region influenced by the outflow of the Saguenay River.  The summer distribution is well known and has changed little in the last twenty years (Michaud et al. 1990, Michaud 1993, Lesage and Kingsley 1995) (Fig. 4). Recent aerial surveys have enumerated belugas in the whole of their summer range (Kingsley and Hammill 1991, Kingsley 1996, Kingsley 1998, Michaud and Chaderet 1990, Gosselin et al. 2001). No significant numbers are reported downstream past Île du Bic or upstream past Île aux Coudres (Reeves and Mitchell 1984).

Little is known of the winter distribution of St. Lawrence belugas. There appears to be a slight increase in the use of the areas a little further downstream during the winter months (Kingsley 1998).

Figure 4: Extent of Occurrence (Area of Extent) and Summer Core Area of the St. Lawrence Estuary Population of Belugas

Sporadic sightings of belugas have been reported outside the main range i.e., from Cap Gaspé to the Bay of Fundy, but these are considered to be vagrants.

St. Lawrence Estuary belugas now occupy only a small part of their former range, which extended further downstream to Pointe des Monts and Cap Chats and upstream well past Île aux Coudes (Vladykov 1944, Reeves and Mitchell 1984). It has been speculated that there might have been two populations of belugas in the St. Lawrence, one centred on the Saguenay River and the other on the Manicouagan River (Kingsley 2002). The latter was heavily exploited (Laurin 1982) and the damming of the river might have resulted in the disappearance of this population.

Figure 5: Extent of Occurrence (Area of Extent) and Summer Core Area of the Ungava Bay Population of Belugas 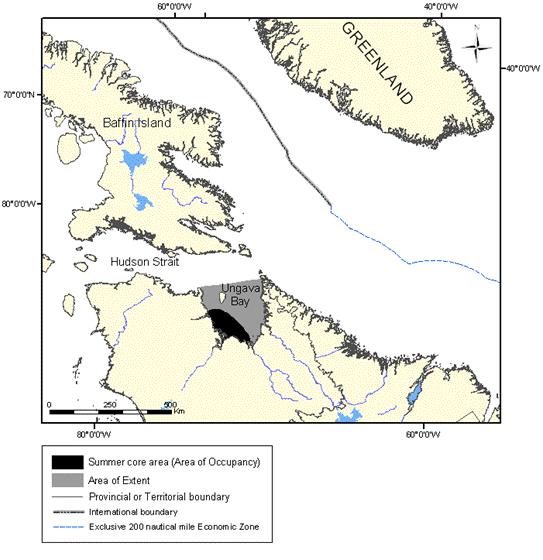 During the same surveys, reconnaissance flights along the shorelines covering estuaries of former known beluga aggregations, such as the Mucalic River, also faÎled to find more than a few belugas. In 1986, a small group of scientists occupied an observation site at the mouth of the Mucalic River, and intensively studied the area from a tower for 18 days during the period of July 18 to August 7, 1986. Only 12 belugas were seen during this whole period, the largest group being of 8 whales (T.G. Smith, E.M.C. Eco Marine Corp. unpubl. observations,1986).

Little is directly known of the seasonal movements of belugas in Ungava Bay. Belugas of several populations spend the winter in the Hudson Strait area, which is contiguous with northern Ungava Bay. Some of the early spring and late fall belugas taken in Ungava Bay are probably from this mixed population (de March and Postma 2003).

The Inuit of Ungava Bay report seeing beluga moving north as the ice edge recedes in the spring. In the autumn belugas are observed moving south, but offshore. There is general agreement that these belugas have declined in numbers, being rarely seen in areas of former aggregation near rivers (Lee et al. 2002).

Three major aerial surveys (Smith and Hammill 1986, Kingsley 2000, Gosselin et al. 2002) have shown that belugas are found in the inshore and offshore areas of the Nastapoka Arc, from Inukjuak to Kuujjuaraapik during the summer months (Fig. 6). They are found as far offshore as the Belcher Islands (Sanikiluaq). The Nastapoka River and Little Whale River are the main areas of estuarine concentration, being frequented by belugas from mid-July to the end of August (Caron and Smith 1990, Doidge 1994, Doidge and Lesage 2001).

A certain amount of direct scientific data exists on seasonal movements from satellite-linked tags. Four animals tagged in 1993 at the Little Whale River, stayed in the area of the Nastapoka well into late September, when their signals were lost (Kingsley et al. 2001). None of the animals went into the area of the Belcher Islands. One beluga tagged in Hudson Strait in early October 1995 remained in deep water and gradually moved to the east until its signals were lost one month later (Kingsley et al. 2001). Recently 7 belugas tagged in Eastern Hudson Bay were followed from July 2002 to January 2003. Most of the animals left Eastern Hudson Bay by October and went into Ungava Bay, remaining there until December. The last locations for two tagged animals in January were near Nain, Labrador (Lewis et al. 2003). At least some of the belugas found off northern Labrador in the winter and spring may be from this population (Brice-Bennett 1978).

There is agreement amongst the Inuit of communities along the Hudson Strait and Eastern Hudson Bay coast that many of the rivers formerly frequented are no longer used by belugas. Most feel that noise has caused them to shift offshore. Two elderly Inuit from Inukjuak mention that one stock of belugas, which spent the summer months north of their village, has been decimated (Doidge et al. 2002).

Figure 6: Extent of Occurrence (Area of Extent) and Summer Core Area of the Eastern Hudson Bay Population of Belugas

Belugas aggregate in the Churchill, Nelson and Seal River estuaries on the south-west coast of Hudson Bay arriving in the area in mid-June and building in numbers in the estuaries until late July. They then begin moving northward along the coast as far as Repulse Bay (Sergeant 1973) (Fig. 7). The exact timing and route used by belugas in these autumn migrations is not yet known. Recent work using satellite-linked radio tags show that belugas of the Churchill estuary spend the whole of the summer months in shallow coastal waters. In early September, an easterly migration begins, which is marked by diving in deep water (Martin et al. 2001). All four tags ceased functioning by late September and thus yielded no information about late autumn migration routes, which ultimately probably lead into Hudson Strait, and perhaps to the Labrador coast (see Brice-Bennett 1978).

Figure 7: Extent of Occurrence (Area of Extent) and Summer Core Area of the Western Hudson Bay Population of Belugas 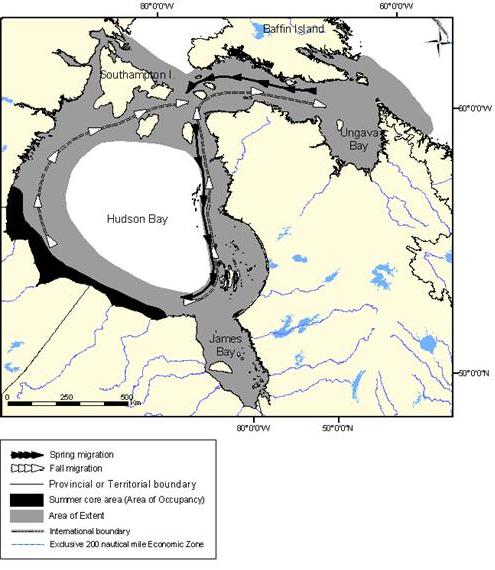 Aerial surveys indicated that a small number of belugas were present in March north of Baffin Bay in the area of the North Water polynya (Finley and Renaud 1980, Stirling 1980, Richard et al. 1998a). From 1987-2000, studies of the movements of tagged belugas showed that most belugas tagged in summer in the High Arctic archipelago remained in the High Arctic – North Water polynya area, at least until the tags stopped transmitting in early winter (Richard et al. 2001a; Fig. 8). 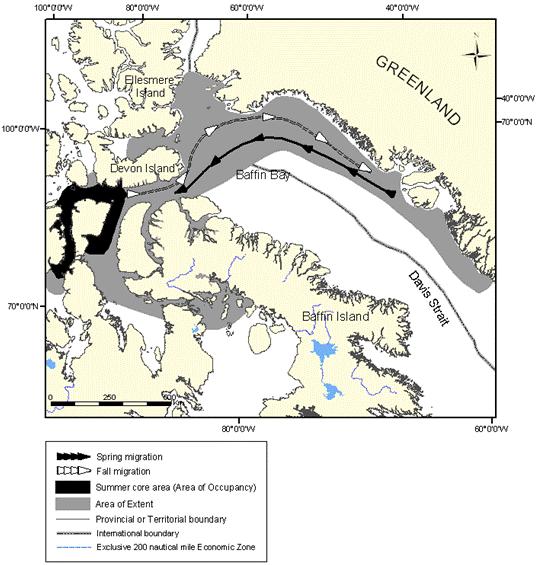 Baffin Island hunters note the gradual disappearance of belugas as the ice forms along the coastline. On northeast Baffin belugas appear to be moving to the east at that time. The Inuit living in Grise Fiord on Ellesmere Island are the only group of hunters who sight belugas throughout the winter along the floe edges of Jones Sound. In the spring belugas make their way into the hunting areas along east and north Baffin as the fast ice is broken up (Remnant and Thomas 1992, Stewart et al. 1995, Stewart 2001).

The presence of belugas during the winter along the West Greenland coast has long been known (Degerbøl and Nielsen 1930) and they have been the target of continuing subsistence hunting by the Inuit of that area (Thomsen 1993). A recent telemetry study of belugas tagged during the summer in one major summering area, Creswell Bay on Somerset Island, indicates that belugas from this area, are part of the population that goes to West Greenland in the winter. Heide-Jørgensen et al. (2003) have estimated from this study that approximately 15% of the belugas spending their summer in the High Arctic move to West Greenland in the winter.

Aerial surveys in 1998-1999 have been done during the winter along the West Greenland coastline between Qeqertarsuaq (69º30’N) and Paamiut (62º00 N) some extending as far as 80 km west off the coast (Heide-Jørgensen and Aquarone 2002). Previous similar surveys were flown in this area in 1981-1982 and 1993-1994 (Heide-Jørgensen and Reeves 1996). The pattern of winter distribution of belugas in all surveys since 1981 along the West Greenland coast has remained fairly constant. Most animals are sighted within 50 km of the coast. The greatest number of sightings were made in the northern strata, particularly on the northern edge of Store Hellfiske Banke, where the coastal shelf ends and where there is the edge of the dense pack-ice covering Disko Bay (Heide-Jørgensen and Aquarone 2002). In southern areas, between Maniitsoq and Paamiut ( 65º N to 62º N ), the distribution of belugas appears to be similar between survey years (Heide-Jørgensen and Reeves 1996).

In Western Greenland, belugas appear in late fall, and spend the winter in a large area of pack ice and open water from Disko Bay to Upernavik. Belugas are hunted mainly on their southward migration in late October or during their northward return in May – June (Thomsen 1993).

Aerial surveys in Cumberland Sound and along the south-east Baffin coast, have shown that the major summer aggregation of belugas is limited to the Clearwater Fiord area where they occupy the estuary of the Ranger River from mid-July to mid-September. Previous studies speculated that some belugas seen in areas as far distant as Frobisher Bay and along the coast near Kimmirut during the summer months came from Cumberland Sound, which at that time was designated the South East Baffin population (Richard and Orr 1986). More recent aerial surveys and tagging of belugas with VHF satellite linked transmitters suggest that belugas remain in the Cumberland Sound area throughout the year (P. Richard, DFO, Winnipeg, pers. com.) (Fig. 9).

Figure 9: Extent of Occurrence (Area of Extent) and Summer Core Area of the Cumberland Sound Population of Belugas 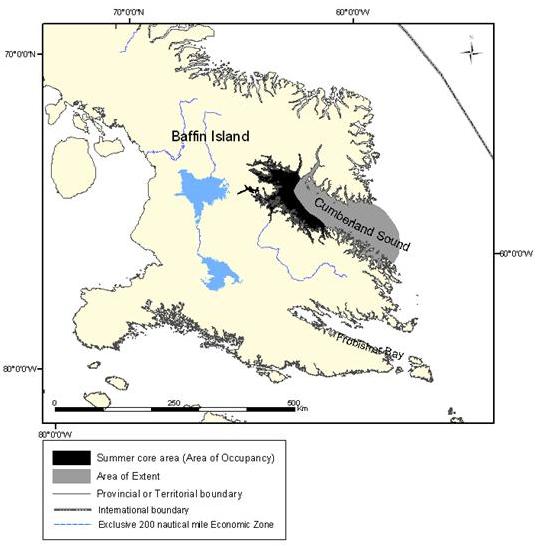 Inuit of Cumberland Sound report that belugas spend less time on their migration into Clearwater Fiord than previously. They relate this to the increased disturbance by motorboat traffic. They also feel that belugas leave Clearwater Fiord earlier in the season than in the past (Kilabuk 1998).

Belugas are known to aggregate in the Mackenzie River Estuary during July but are also found dispersed in the adjacent offshore areas (Fraker et al. 1979, Harwood et al. 1996, Richard et al. 2001b). In late July they begin to disperse toward the east, mainly into the Amundsen Gulf and further north (Fig. 10). During two years of satellite tagging studies, 11 of 14 male belugas, but none of the 9 tagged females, traveled to distant Viscount Melville Sound, and penetrated an area of 9/10 ice cover as far east as Stefansson Island (DFO 2000). In September all the tagged belugas migrated westward to the western Chukchi Sea and more continued to the Bering Strait area. All tags had stopped transmitting by late November.

Figure 10: Extent of Occurrence (Area of Extent) and Summer Core Area of the Eastern Beaufort Sea Population of Belugas 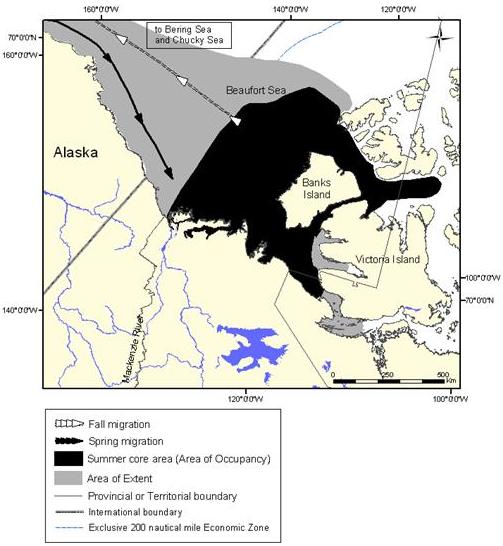 The Inuvialuit report that the first belugas to be seen in the late winter-early spring are often sighted in the open-water ice shear zone, off the west coast of Banks Island. Depending on ice conditions they may first appear near Herschel Island in late April or early May. Belugas come to the shallow waters of the Mackenzie Delta in June to early July. They spend some time in the delta, and then disperse offshore to appear in Darnley Bay and in the Amundsen Gulf. Migrations begin towards the west in late August to early September (Byers and Roberts 1995).