Blanding’s Turtle ( Emydoidea blandingii ) was originally named and described by Holbrook (1836) as a member of the genus Cistuda . The classification was based on morphological characteristics resembling the European Pond Turtle, Emys orbicularis (then Cistuda europea ), and the Eastern Box Turtle, Terrapene carolina (then Cistuda carolina ). Blanding’s Turtle was then grouped in the genus Emys with E. orbicularis based on morphological similarities such as unkeeled carapaces, kinetic shells, and colouration (Feldman and Parham 2002). It remained as such until separated into the genus Emydoidea as the sole member (McCoy 1973). Emydoidea was considered to be closely related to the Chicken Turtle of the genus Deirochelys by McDowell (1964). However, based on electrophoretic myoglobin polymorphism, the family Emydidae was separated into the subfamilies Emydinae and Deirochelyinae (Seidel and Adkins 1989; Feldman and Parham 2002).

It has been recently recommended that the genus Emydoidea be reclassified within Emys. Feldman and Parham (2002) suggested that the Blanding’s Turtle be placed in Emys based on morphological and ecological traits as described by Loveridge and Williams (1957). The traits described include feeding mechanisms that involve cervical elongations and highly modified skulls.

Relative to other freshwater turtles, Blanding’s Turtles are of medium size with a moderately high, domed carapace that lacks keels or sculpturing. Colouration of the carapace is generally black or dark brown, with some individuals exhibiting lighter shades of gray or brown. The carapace is often marked with yellowish or tan streaks and spots; however, these markings are highly irregular and variable among individuals. The plastron exhibits a semi-functional hinge between the pectoral and abdominal scutes. Individuals show variation in the flexibility of the hinge, with some turtles being able to close the plastron entirely, whereas others have almost no flexibility. Each scute on the plastron is yellowish with a single dark spot, occurring on the outer edge of each scute. A ‘V’ shaped notch is present at the rear of the plastron between the anal scutes, and growth annuli are usually well defined on the plastral scutes.

Total carapace length ranges between 15.2 cm and 27.4 cm. The chin, throat, and underside of the neck are this species’ most characteristic feature, generally being bright yellow, or occasionally creamy, in colour. The sides of the neck and top of the head are variable in colour, generally dark brown or black in males, but lighter in colour and even mottled in females (Ernst et al. 1994). The beak is notched on the upper jaw (Ditmars 1907; Harding 1997; Conant and Collins 1998), and the mouth curves upward in a devilish smile. The neck is quite long.

Hatchling Blanding’s Turtles have a carapace length of 2.5 to 4 cm and differ in colour from adults. Hatchlings have a grey, brown, or black carapace devoid of patterning. The plastron is characterized by a central black spot surrounded by yellow or cream colouration. The transverse hinge on the plastron is non-functional in hatchlings and young juveniles, and the tail extends well beyond the rear of the carapace. The head may have lightly coloured spotting and the characteristic yellow throat and chin are present. Colours are generally brighter in younger individuals than in adults (Harding 1997; Conant and Collins 1998). The tan/yellow spots and streaks on the carapace develop in juveniles after the second year, and these markings are most noticeable in 3- to 6-year-old turtles.

Recent and ongoing genetic assessment in the Nova Scotia population, as well as across the species’ range, has improved our understanding of population genetic structure. Surprisingly, the small and isolated Nova Scotia population contains a high degree of genetic variation; sometimes this variation is greater than in populations within the species’ main range (tested samples include: Massachusetts, Wisconsin, Minnesota, Illinois, Michigan and Ontario) (Mockford et al. 1999; Ruben et al. 2001). The Nova Scotia population has also diverged significantly from the tested populations in the main range (Mockford et al. 1999; Ruben et al. 2001; Mockford unpublished data). Even within the Nova Scotia population complex, the three known sub-populations are genetically distinguishable despite being separated by only short geographic distances (as little as 15 km) (Mockford et al. 2005). Genetic analysis suggests limited, although significant, gene flow between these subpopulations (1.8 - 5.8 turtles per generation). Even within subpopulations, genetic structure is evident (McEachern 2003; Toews 2005; as cited by Tom Herman and Jennifer McNeil, pers. comm. Jan. 24, 2005). (Nova Scotia information provided by Tom Herman and Jennifer McNeil, pers comm. Jan. 24, 2005).

The Canadian population of Blanding’s Turtles can be divided into two geographically separated units. The first unit is the Nova Scotia population, which received designation from the Committee on the Status of Endangered Wildlife in Canada (COSEWIC) in 1993 as Threatened (Herman et al. 1995). This population represents the extreme northeastern area of the species’ range, and is separated from the rest of the species’ range by several hundred kilometres (Figure 1). 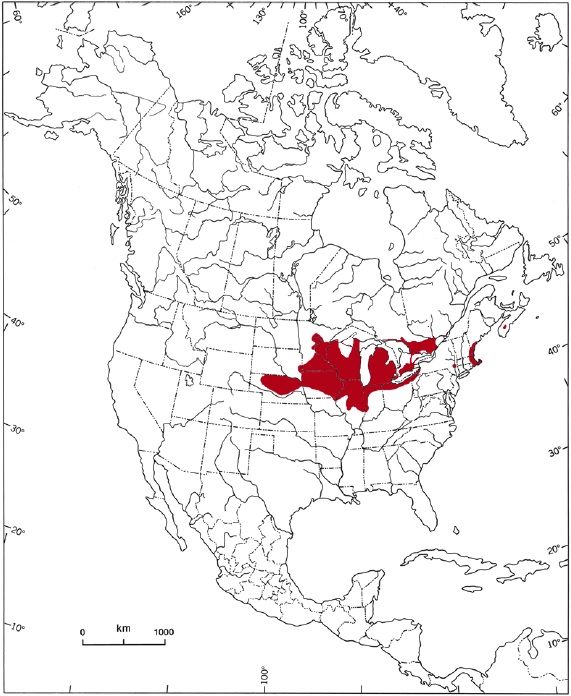 The second Canadian designatable unit, referred to in this report as the Great Lakes / St. Lawrence population, exists within Ontario and Québec, with approximately 20% of its global range being contained within these two provinces (Austen and Oldham 2001). The Québec population could possibly be considered a third unit, separated from the Ontario population (Daniel St-Hilaire, pers. comm. 2005). Damming of the Ottawa River may have led to the isolation of the Québec population from that of Ontario. This perception warrants further investigation, but currently there is not sufficient evidence to support this hypothesis.