Approximately 20% of the Blanding’s Turtle’s global range is contained within Canada, particularly Ontario, as the species’ range is centred in and around the Great Lakes Basin. In the United States, the species’ range extends from Nebraska eastward through Iowa, South Dakota, Minnesota, Missouri, Wisconsin, Illinois, Indiana, Michigan, Ohio, and Pennsylvania (Ernst et al. 1994; Power et al. 1994; Conant and Collins 1998) (Figure 1). There are also small local populations in New York, Massachusetts, New Hampshire, and Maine in addition to isolated populations in the previous states (Power et al. 1994; Ruben et al. 2001; Brodman et al. 2002). Across its North American range, the Blanding’s Turtle often occurs as isolated populations that are geographically separated by natural barriers such as large lakes, fast-flowing rivers, and mountain ranges. More recently and often, the separation is a result of anthropogenic barriers such as roadways, and commercial and residential developments (Joyal et al. 2001).

In Canada, the Blanding’s Turtle is found across southern and south-central Ontario, in the extreme southwestern edge of Québec (Bider and Matte 1994; Austen and Oldham 2001; St-Hilaire 2003; Ontario Herpetofaunal Summary 2004; Québec Atlas of Amphibians and Reptiles data bank 2005), and in two watersheds in Nova Scotia (Herman et al. 2003).

In Ontario (Figure 2), the Blanding’s Turtle is located throughout southern and south-central Ontario as far north as the Chippewa River in Algoma West (Bob Knudsen, pers. comm. Feb. 22, 2005) and continuing eastward through Algoma East and Elliot Lake (Jim Trottier, pers. comm. Feb. 21, 2005) to Ottawa (Ontario Herpetofaunal Summary 2004). According to the Ontario Herpetofaunal Summary (OHS) (2004), sightings since 1990 have occurred in the counties and districts of Algoma, Brant, Elgin, Essex, Frontenac, Haldimand-Norfolk, Haliburton, Halton, Hamilton-Wentworth, Hastings, Huron, Kawartha Lakes, Kent, Lennox and Addington, Lambton, Lanark, Manitoulin, Middlesex, Muskoka, Nipissing, Northumberland, Ottawa- Carleton, Parry Sound, Peel, Peterborough, Prince Edward, Renfrew, Simcoe, Sudbury, Waterloo, Pelee Island and York. Since 1990, there have been no reported sightings of the Blanding’s Turtle in Durham, Niagara, and Oxford, and the species may be extirpated from these districts. There are no recorded sightings in the Bruce Peninsula, or in the districts of Bruce, Grey, Huron, Perth, Dufferin and Wellington. This lack of sightings is perplexing as there are still some wetlands and suitable habitat present in these areas (Michael Oldham, pers. comm. Oct. 13, 2004). Another gap in the range of the Blanding’s Turtle occurs in extreme southeastern Ontario in the districts of Prescott, Russell, Stormont and Dundas, and Glengarry. In these areas, there are only a few suitable wetlands remaining and this may explain the lack of sightings (Michael Oldham, pers. comm. Oct. 13, 2004). 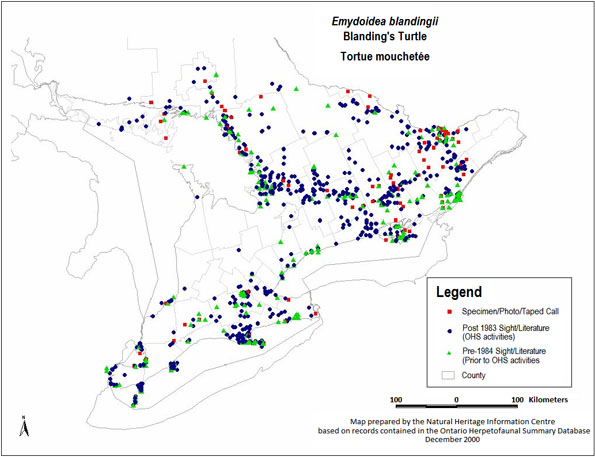 In Quebec (Figure 3), the range is limited to the southwestern edge of the province and appears to be continuous with the Ontario population (Bider and Matte 1994; St-Hilaire 2003; Herman et al. 1995; Québec Atlas of Amphibians and Reptiles data bank 2005). According to the Québec Atlas of Amphibian and Reptiles data bank (QAAR), sightings have occurred in the counties of Pontiac and Portneuf, and tend to centre on the towns of Bristol and Bristol-des-mines. The Québec population appears to be centred in a region close to the border with Ontario, near Ottawa, although there have been other isolated sightings; one close to Montreal, and another northeast of Rouyn-Noranda (St-Hilaire 2003). It is not clear whether these isolated sightings represent two remnant populations, or if they are turtles that have been released from captivity (Centre de données sur le patrimoine naturel du Québec 2005).

In Nova Scotia (Figure 4), the known populations are located on two watersheds in the southwestern portion of the province, although anecdotal sightings have been reported from adjacent watersheds (Herman et al. 2003). At least three distinct sub-populations are recognized within the Nova Scotia population complex; one occurs in a federally protected area (Kejimkujik National Park), and the other two in working landscapes outside of the park’s boundaries. The Nova Scotia populations are the most isolated, and are disjunct from the rest of the species’ range. They are considered to be relict from a warmer period when the turtle had a more continuous distribution along the eastern seaboard into Nova Scotia (Herman et al. 1995). Currently in Nova Scotia, the range of the Blanding’s Turtle is restricted to the inland plateau where summer temperatures are higher than in the rest of the province (Power et al. 1994). (Nova Scotia information supplied by Tom Herman and Jennifer McNeil, pers. comm. Jan. 24, 2005).