Ord’s kangaroo rat (Dipodomys ordii Woodhouse 1853) is a small, nocturnal Heteromyid rodent endemic to the Americas. It is one of 21 species of kangaroo rats (Dipodomys) that occur exclusively in the arid grasslands and deserts of western North America and the only species of Dipodomys in Canada. Dipodomys is derived from Greek, meaning “two-footed mouse”, referring to its bipedal locomotion. The common name reflects the characteristic hopping style of locomotion and the long tail. The French name is rat kangourou d’Ord.

Within the genus, Ord’s kangaroo rat belongs to the ordii-group (Grinnell 1921, Stock 1974). Chromosomal evidence suggests that the species is more closely related to the Gulf Coast kangaroo rat (D. compactus) of southern Texas than to other congeners (Stock 1974, Patton and Rogers 1993).

Ord’s kangaroo rats have large hind legs and feet that facilitate bipedal locomotion (Figure 1). The dorsal pelage is mostly orange-brown but the ventral surface, dorsal surfaces of the feet, markings above the eye and below the ear, forelimbs, hip stripes, lateral stripes of the tail, and base of the tail are white. The species has fur-lined cheek pouches and five toes on each foot. The tail is tufted and long, accounting for more than half of total length (Table 1). Across most of the species’ range, males tend to be slightly larger than females (Kennedy and Schnell 1978, Best 1993). However, the Canadian population does not exhibit sexual size dimorphism (Gummer unpubl. data). Adult kangaroo rats in Canada (Table 1) are consistently larger (up to 33 %) than conspecifics from more southern localities (Jones 1985, Best 1993). The skull is distinctive from other sympatric rodents in Canada due to its conspicuous, large auditory bullae and grooved upper incisors. 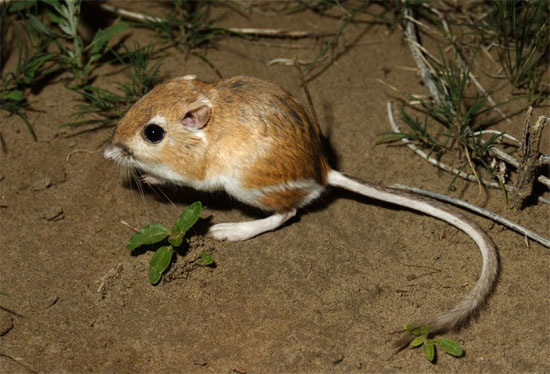 Photograph by D.L. Gummer, courtesy of the Royal Alberta Museum.

The population genetics of northern Ord’s kangaroo rats have not been studied. However, the Canadian population may have been isolated for approximately 6000 years (Kenny 1989). Isolation, short generation time, and extreme annual population cycles are hypothesized to have favoured genetic drift and adaptations to prevailing regional environmental conditions (Gummer 1997a, Gummer 2005).