Ord’s kangaroo rat is widely distributed in the interior arid grasslands and deserts of western North America (Figure 2; Hall 1981, Schmidly et al. 1993, Williams et al. 1993). Its geographic range extends across approximately 3 370 000 km2 and 31º of latitude from the southern prairies in Canada to central Mexico. There have been no large-scale, historical changes in the overall geographic distribution.

Figure 2: The Distribution of Ord’s Kangaroo Rats in Canada and the Northern U.S. 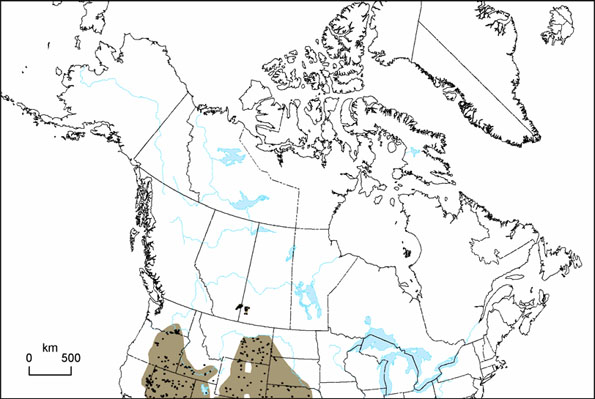 The species’ distribution in the northwestern United States (revised to reflect the separation of the Canadian population) is also indicated for reference (after Hall 1981, Schmidly et al. 1993, Montana Natural Heritage Program 2005). Confirmed occurrences are indicated by black squares (▪). Confirmed occurrences in Canada are based on data provided by sources listed in Table 2, whereas occurrence records shown for the United States are based on a query of the Global Biodiversity Information Facility (2005) and the Montana Natural Heritage Program (2005).

The Canadian range of Ord’s kangaroo rats is limited to a small area in southwestern Saskatchewan and southeastern Alberta (Figure 3), representing less than 1% of the species’ global distribution. The Canadian range occurs in the mixed grassland ecoregion of the prairie ecozone (Marshall and Shutt 1999) in the vicinities of the Great Sand Hills, Saskatchewan (Nero 1956, Nero and Fyfe 1956, Kenagy 1976, Epp and Waker 1980, Kenny 1989), and the Middle Sand Hills, Alberta (Smith and Hampson 1969, Gummer et al. 1997, Gummer 1999, Gummer and Robertson 2003a, Gummer and Robertson 2003b). All confirmed records of kangaroo rats in Canada, including those from unpublished databases (Table 2), occur within or directly adjacent to sand hills (Figure 3), except for two records that are presumed to have been accidental or vagrant: (i) an anecdotal observation (Carleton 1956) near Ravenscrag, Saskatchewan (50 km south of the nearest sand hills); and (ii) a specimen held by the Royal Ontario Museum from near Val Marie, Saskatchewan (135 km south of the nearest sand hills).

Figure 3: The Distribution of Ord’s Kangaroo Rats and the Locations of Surveys for the Species in Sand Hills of Southwestern Saskatchewan and Southeastern Alberta 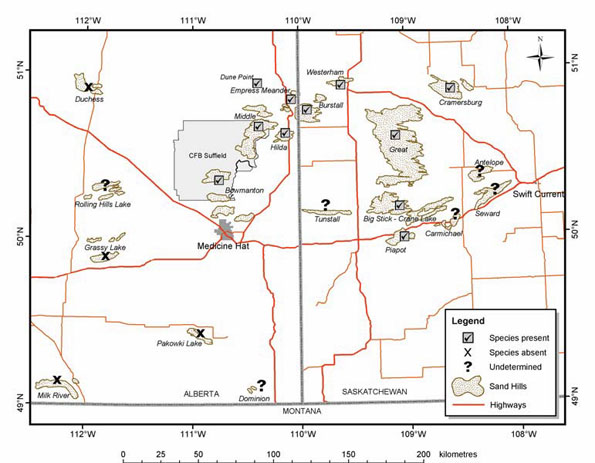 All recognized sand hill formations (following Wolfe 2001) within and adjacent to the Canadian range are shown. Also included is the status of kangaroo rats in each of the sand hill areas (i.e., species present, presumed to be absent based on surveys, or undetermined).

Confirmed occurrences were defined as direct observations of kangaroo rats or verifiable indirect observations (e.g., clear photograph of distinctive tracks and burrows) for which the precision of the geographic location was < 8 km. Data were excluded if they were redundant with original data sets or if consultation with original data sources revealed records to be suspect, unverifiable, or unmappable.

Provincial databases were consulted for confirmed occurrences that were not otherwise available from the original data sources.

Canadian Ord’s kangaroo rats are a disjunct population at the northernmost periphery of the species’ range (Figures 2 and 3; Kenny 1989, Gummer 1997a). The nearest occurrences of kangaroo rats in Montana (Montana Natural Heritage Program 2005), is approximately 270 km south. There is no evidence of kangaroo rats occurring in the Duchess, Grassy Lake, Milk River, or Pakowki Lake sand hills, despite intensive surveys for kangaroo rats in those areas of southeastern Alberta (Figure 3; Kenny 1989, Gummer and Gummer 1997, Gummer and Robertson 2003a). Systematic surveys for kangaroo rats have not been conducted in extreme southern Saskatchewan but there are no sand hills in that area (Figure 3).

The Canadian population of kangaroo rats occurs in two discrete areas: in the vicinity of the Great Sand Hills and centred around the Middle Sand Hills along the South Saskatchewan River (Figure 3). These two areas are fragmented by an intervening area of agricultural land that does not contain sand hills (Wolf 2001; Figure 4). Excluding this area, the total extent of occurrence of kangaroo rats in Canada is approximately 6030 km2 (Figure 4). 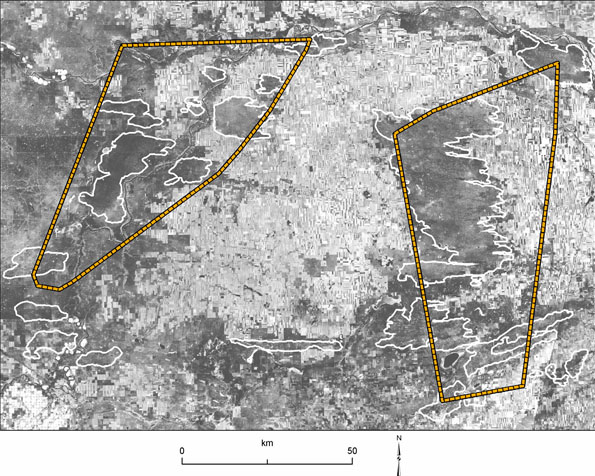 The area actually occupied by kangaroo rats is extremely small due to their specific habitat requirements. Kenny (1989) estimated the total area of open, sandy habitats available for kangaroo rats during a drought in the mid-1980s in the Great Sand Hills, Cramersburg Sand Hills, and Burstall Sand Hills (see Figure 3), representing more than 50% of the Canadian range, at approximately 6.8 km2. The average amount of bare sand has been estimated at 0.10% for the Great Sand Hills (Vance and Wolfe 1996) and 0.011% for the Middle Sand Hills (Vance and Wolfe 1996, Bender et al. 2005). According to these estimates and the total area of sand hills in the Canadian range (Wolfe 2001), the maximum area of natural habitat occurring in the last decade was only 2.1 km2. This estimate does not include anthropogenically created habitat such as sandy roads, trails, and fallow fields (see Habitat). Cumulatively, if all of the confirmed locations, including those in anthropogenic habitats, were each presumed to represent a quadrat of occupied habitat measuring 250 m in width (6.25 ha), then the area of occupancy in Canada would be 53 km2. However, given that the majority of home ranges are < 100 m in width (< 1 ha; Gummer and Robertson 2003c), and the majority of patches of habitat are also < 100 m in width (Bender et al. unpubl. data), the area of occupancy is likely closer to 10 km2.

Both the extent of occurrence and area of occupancy have apparently declined in recent decades. In 1970-1971, kangaroo rats occurred in an area of sand hills 15 km north of Hilda, Alberta, based on four museum specimens collected there (University of Alberta Museum of Zoology, Smith 1972). However, recent surveys in 1997 and 2001 found no evidence of kangaroo rats (Gummer and Gummer 1997, Gummer and Robertson 2003a).

There is some evidence that local distribution of kangaroo rats is dynamic. Kenny (1989) reported that 1 of 4 study populations was extirpated in the Great Sand Hills in 1985. Gummer and Robertson (2003b) found that 7 of 19 study populations in the Middle Sand Hills appeared to be extirpated in 2002. There is evidence of subsequent recolonization of 2 of these areas (Gummer and Bender unpubl. data).