4 Protection of Individuals and Residences of Listed Species

The protection that comes into effect following the addition of a species to Schedule 1 of SARA depends on the type of species (e.g., migratory bird, aquatic species), its listed status (endangered, threatened, special concern) and its location.

These prohibitions apply immediately upon listing to:

Provinces and territories have the primary responsibility to protect other listed species on provincial, territorial and private land. If the Minister of the Environment is of the opinion that the provincial or territorial legislation does not effectively protect the individuals of a species or their residences, the Minister is required, after consultation with the appropriate provincial or territorial minister or the applicable wildlife management board, to recommend to the Governor in Council that an order be made to apply the prohibitions in sections 32 and 33 of SARA.

In November 2013, the Governor in Council issued the first emergency order under section 80 of SARA to protect the Greater Sage-Grouse, an endangered bird that depends on the unique prairie ecosystem of southeastern Alberta and southwestern Saskatchewan. The order comes into force on February 18, 2014. In 2012, it was estimated that there were between 93 and 138 adult birds in Canada. 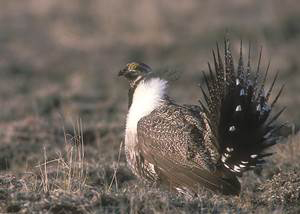 The Emergency Order addresses imminent threats to the survival and recovery of the Sage-Grouse by protecting important habitat for this species on certain provincial and federal Crown lands in Alberta and Saskatchewan. The Order also restricts activities on these lands that impact Sage-Grouse populations. The Order does not apply on private lands nor does it limit grazing on federal or provincial Crown lands. The Order, along with important voluntary stewardship measures, is anticipated to help stabilize the Sage-Grouse population and begin its recovery.

Sections 73 to 78 of SARA address agreements, permits, licences, orders and other instruments that authorize activities that otherwise would be offences under the Act.

If all reasonable alternatives have been considered, all feasible measures have been taken to minimize the impact of the activity, and the survival or recovery of the species is not jeopardized, the competent minister may enter into an agreement or issue a permit under section 73 of SARA for the following activities:

In 2012, the Jobs, Growth and Long-term Prosperity Act amended SARA to provide the authority for regulations respecting time limits for issuing permits under section 73 of SARA, or for refusing to do so, and to specify the circumstances under which those limits may not apply. As a result, on July 3, 2013, the Permits Authorizing an Activity Affecting Listed Wildlife Species Regulations were published in the Canada Gazette, Part II. These Regulations outline the information required to be submitted when applying for a permit, impose a 90-day time limit on the government for issuing or refusing to issue permits, and outline the circumstances under which the time limit will be paused or does not apply, such as where an applicant does not submit all necessary information, where additional consultations are required (e.g., with Aboriginal people) or where the activity described in the permit application is modified before the permit is issued or refused.

Environment Canada, the Parks Canada Agency, and Fisheries and Oceans Canada issued a total of 144 SARA permits in 2013 for purposes of research, conservation and monitoring of listed species.

In 2013, Fisheries and Oceans Canada issued 80 SARA permits. Of these, 57 permits covering at least 34 listed species were issued to academic and government researchers as well as Fisheries and Oceans Canada scientists, for conservation research affecting species at risk, including inventory, population monitoring, habitat use and restoration, and conservation genetics. Twenty-five permits were for activities that may incidentally affect a listed species but where peer-reviewed assessments determined that the level of harm from these activities would not jeopardize the survival or recovery of the listed species.

In 2013, Environment Canada issued 41 permits to allow for the monitoring, inventory or management of 54 species, including reptiles, amphibians, birds, vascular plants, arthropods, molluscs, mosses and mammals. Of the 41 permits issued, 19 were for scientific research related to the conservation of a species, 5 were for activities benefiting a species or required to enhance its chance of survival in the wild, 10 were for activities incidentally affecting a species, and 7 were for more than one of these three purposes. Details regarding delivery against service standards are available online.

In 2013, the Parks Canada Agency issued 23 SARA permits. Of these, 19 permits covering at least 15 listed species were issued to academic and government researchers as well as Parks Canada scientists, for conservation research affecting species at risk, including inventory, population monitoring, habitat use and restoration, and conservation genetics. The remaining 4 permits were for activities that may incidentally affect a listed species. The Parks Canada Agency maintains an online research permitting system to enhance services to researchers, and to ensure that the Agency is informed of research being conducted in the protected heritage places network. The system incorporates a mandatory peer-review mechanism that ensures that SARA requirements are considered for every permitted research activity.

The majority of SARA-compliant permits issued by Parks Canada are issued under legislation other than SARA.

Explanations for all permits issued under the Act by Environment Canada, the Parks Canada Agency, and Fisheries and Oceans Canada are posted on the Species at Risk Public Registry.