Species at risk monitoring is ongoing within the Parks Canada heritage areas network to assess the long-term condition of species and to evaluate the results of recovery actions. Parks Canada reviews detailed assessments to monitor and capture changes in the conservation status of species and updates them as new information becomes available. The information assists in determining progress towards achieving recovery goals.

Environment Canada collects species at risk information on its protected areas and through its Migratory Bird program. Federal funding programs administered by Environment Canada also support monitoring activities, including the HSP, AFSAR and the IRF. Information from these initiatives, along with information from partner organizations and researchers, allows for tracking progress towards meeting recovery goals.

In its sixth year, Fisheries and Oceans Canada’s Marine Mammal Response Program has well-established regional networks that have become more visible to the general public. Departmental personnel and external partner organizations play key roles in marine animal emergency response. In 2013, they carried out 161 responses nationally for species at risk. Responses included freeing whales from fishing gear entanglements, dealing with ice entrapments, refloating live stranded animals and investigating incidents of harassment. Information from response activities help Fisheries and Oceans Canada monitor and evaluate the threat level from these forms of harm. In addition, the Program also uses the information collected to find ways to reduce entanglements and vessel collisions. Outreach activities also form an important part of the work done to educate the public with respect to ways to help protect and avoid harming marine animals.

The Fisheries and Oceans Canada–supported network of marine animal responders is comprised of internationally recognized experts in marine animal emergency response who provide advice and training expertise to other countries. Information gathered from response activities is used for adaptive management to support regulatory change, species at risk recovery planning, and policy development through the quantification of threats affecting marine animal species. This past year, the activities of marine animal responders garnered national and international attention because of its very public emergency response activities, including work to save Belugas in the St. Lawrence; the release of a stranded killer whale in British Columbia; and aiding ice-entrapped Belugas in the north. Furthermore, the Marine Mammal Response Program was featured on the ABC television network in three episodes of “Sea Rescue” responding to a Pacific Humpback Whale entanglement situation and in an episode of CBC’s “Land and Sea” responding to a stranded juvenile Pilot Whale in the Maritimes.

Grasslands National Park in southern Saskatchewan is home to the most northern population of Mormon Metalmark butterflies in North America, a threatened species under SARA. In 2007, Parks Canada launched the Mormon Metalmark project to find and better understand colonies of the metalmark butterfly. At the time, only six colonies of metalmarks had been mapped out within the park.

Locating this rare multicoloured butterfly is like searching for a needle in a haystack. Metalmarks typically do not travel outside of their home colony of branched-umbrella plants (Eriogonum pauciflorum) and rubber rabbitbrush (Ericameria nauseosus). Consequently, to help in narrowing the search, Parks Canada scientists developed a new habitat model that predicts the best and most likely places for the metalmark to be situated within the park. With the help of 65 volunteers, 132 colonies of metalmarks were located--more than 20 times the previously known number!

This project has generated new and exciting information about the life cycle and behaviour of these butterflies. Since then, park scientists have observed females laying their eggs on exposed rock and soil close to their host plants--a different behaviour from their more southerly counterparts. This new information makes a key contribution to our understanding of the species. The information collected from field surveys will help park managers to develop more targeted and effective recovery actions to ensure the metalmark’s survival in Canada. 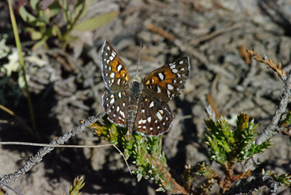 On the Trail of the American Marten

In 1986, the Newfoundland American Marten population was declared endangered and was protected under SARA since it came into force. For more than 15 years, Parks Canada has been reintroducing martens into the Terra Nova National Park, and as a result of all the recovery efforts across the island, the risk status was moved from endangered to threatened in 2007.

Current monitoring efforts focus on live trapping and radio-collaring adult martens to help park managers better understand whether the marten population is increasing, where they go and what kind of habitat they use. Martens are capable of covering great distances: one radio-collared marten travelled across the entire province and back during the course of a single winter.

Based on data collected so far, the project is succeeding. The number of Newfoundland martens in Terra Nova is steadily growing, and martens have been found throughout the park and surrounding areas, in a variety of different habitat types. Continued effort is needed in order to ensure that the marten survives and thrives once again in its native province. 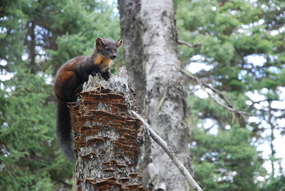 SARA requires that a general report on the status of wildlife species be prepared every five years. The report’s purpose is to provide Canadians with an overview of which wild species are doing fine, which should be monitored and which need to be formally assessed or reassessed by COSEWIC. Reports entitled Wild Species: The General Status of Species in Canada (see section 2.1), prepared by a federal–provincial–territorial group of experts, fulfill this requirement. Preparation of the next report, Wild Species 2015, is underway.

Wild Species 2000 provided general assessments of 1 670 species in Canada. Wild Species 2005 presented general status assessments for 7 732 species from all provinces, territories and ocean regions, representing all of Canada’s vertebrate species (fish, amphibians, reptiles, birds and mammals), all of Canada’s vascular plants, and 4 invertebrate groups (freshwater mussels, crayfishes, ordinates and tiger beetles). Wild Species 2010 included assessments of 11 950 species. The number and variety of species covered by these reports have greatly increased, but with the total number of species in Canada estimated at more than 70 000, there are still many species left to be assessed.