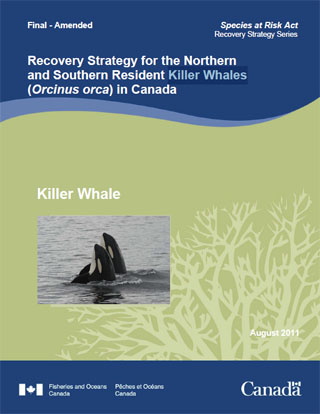 About the Species at Risk Act recovery strategy series

In the context of species at risk conservation, recovery is the process by which the decline of an endangered, threatened, or extirpated species is arrested or reversed, and threats are removed or reduced to improve the likelihood of the species’ persistence in the wild. A species will be considered recovered when its long-term persistence in the wild has been secured.

Recovery strategy development is a commitment of all provinces and territories and of three federal agencies -- Environment Canada, Parks Canada Agency and Fisheries and Oceans Canada -- under the Accord for the Protection of Species at Risk. Sections 37–46 of SARA (Species at Risk Act) outline both the required content and the process for developing recovery strategies published in this series.

To learn more about the Species at Risk Act and recovery initiatives, please consult the SARA Public Registry.

You can download additional copies from the SARA Public Registry.

Content (excluding the cover illustration) may be used without permission, with appropriate credit to the source.

This strategy will be complemented by one or more action plans that will provide details on specific recovery measures to be taken to support conservation of the species. The Minister will take steps to ensure that, to the extent possible, Canadians directly affected by these measures will be consulted.

Under the Species At Risk Act, the Minister of Fisheries and Oceans (the competent minister) is responsible for preparing and finalizing the Recovery Strategy with respect to Northern and Southern Resident Killer Whales.

These populations occur off the coast of the province of British Columbia and within the proposed Gwaii Haanas and Southern Strait of Georgia National Marine Conservation Areas. The Province of British Columbia, Environment Canada and Parks Canada also cooperated in the development of this recovery strategy. In addition, both populations are considered trans-boundary in United States waters. The US National Oceanic and Atmospheric Administrations also participated in its preparation.

Fisheries and Oceans Canada wishes to thank the Resident Killer Whale Recovery Team for its efforts in developing the proposed Recovery Strategy for the Northern and Southern Resident Killer Whale in Canada. The Team members were generous in contributing their own time to the development of the proposed Recovery Strategy. The Recovery Strategy is based on an extensive literature review and on technical input from individual team members and from group discussions and was mostly written by Kathy Heise. The Recovery Team is grateful for the expert reviews provided by Dr. Volker Deecke of the University of British Columbia and Dr. Christope Guinet, Centre d’Etudes Bilogiques de Chize, France. The cover photo was provided by Graeme Ellis. Doug Sandilands (Vancouver Aquarium Marine Science Centre) provided Figures 1-3.

A strategic environmental assessment (SEA) is conducted on all SARA recovery planning documents, in accordance with the Cabinet Directive on the Environmental Assessment of Policy, Plan and Program Proposals. The purpose of a SEA is to incorporate environmental considerations into the development of public policies, plans, and program proposals to support environmentally-sound decision making.

Recovery planning is intended to benefit species at risk and biodiversity in general. However, it is recognized that strategies may also inadvertently lead to environmental effects beyond the intended benefits. The planning process based on national guidelines directly incorporates consideration of all environmental effects, with a particular focus on possible impacts on non-target species or habitats. The results of the SEA are incorporated directly in the strategy itself, but are summarized also below.

While this recovery strategy will clearly benefit the environment by promoting the recovery of the northern and southern killer whales, several potentially adverse effects also were considered. Through the development of this strategy numerous anthropogenic factors that jeopardize or have potential to jeopardize the recovery of these populations were evaluated and are presented. Principal among the anthropogenic factors or threats are environmental contamination, reductions in the availability or quality of prey, and both physical and acoustic disturbance. In some cases these factors threaten the populations; in other cases they may affect critical habitat. It was concluded that some threats can be mitigated through the use of existing legislation, policies and programs and, in fact, there are numerous examples of mitigation measures that are currently employed outlined herein. However, in other cases the threat and/or the potential mitigation measure(s) require further research or evaluation before recommendations on specific actions or activities can be formulated. The general type of research, evaluation and approaches for mitigation are presented in this strategy. However, through the course of action planning, specific activities for recovery and mitigation will be evaluated and detailed in the action plan for these populations along with an evaluation of effects and costs for each activity or measure. Therefore, taking into account the general nature of the recommendations for new mitigation to recover these populations and that many of the recommendations to protect critical habitat fall under existing legislation and policies, this strategy will not entail any new significant adverse effects.

SARA defines residence as: “a dwelling-place, such as a den, nest or other similar area or place, that is occupied or habitually occupied by one or more individuals during all or part of their life cycles, including breeding, rearing, staging, wintering, feeding or hibernating” [SARA S2(1)].

Residence descriptions, or the rationale for why the residence concept does not apply to a given species, are posted on the SARA Public Registry.

The northern and southern resident populations of killer whales are marine mammals and are under the jurisdiction of the federal government. The Species at Risk Act (SARA), Section 37) requires the competent minister to prepare recovery strategies for listed extirpated, endangered or threatened species. The northern and southern resident populations of killer whales were listed as threatened and endangered, respectively under SARA at proclamation on June 5, 2003. Fisheries and Oceans Canada – Pacific Region led the development of this recovery strategy. The strategy meets SARA requirements in terms of content and process (Sections 39-41). This Recovery Strategy was developed in cooperation or consultation with many individuals, organizations and government agencies, in particular:

Please see the Record of Cooperation and Consultations - Appendix D for further details.

Resident killer whale populations in British Columbia are presently considered to be at risk because of their small population size, low reproductive rate, and the existence of a variety of anthropogenic threats that have the potential to prevent recovery or to cause further declines. Principal among these anthropogenic threats are environmental contamination, reductions in the availability or quality of prey, and both physical and acoustic disturbance. Even under the most optimistic scenario (human activities do not increase mortality or decrease reproduction), the species' low intrinsic growth rate means that the time frame for recovery will be more than one generation (25 years).

The southern resident killer whale population experienced declines of 3% per year between 1995 and 2001, and has increased since then to 85 members in 2003Footnote 1. During the summer and fall, southern residents are primarily found in the trans-boundary waters of Haro Strait, Boundary Pass, the eastern portion of the Strait of Juan de Fuca, and southern portions of the Strait of Georgia. This area is designated as 'critical habitat' based on consistent and prolonged seasonal occupancy. Some members of the population typically remain in the same general area in winter and spring, but others appear to range over much greater distances, and have been reported as far south as Monterey Bay, California, and as far north as Haida Gwaii (the Queen Charlotte Islands). Winter and spring critical habitat has not been identified for the latter group. During the summer and fall, the principal prey of southern residents appears to be chinook and chum salmon (Oncorhynchus tshawytscha and O. keta); little is known of their diet in the winter and spring. The lack of information about winter diet and distribution of the southern residents is a major knowledge gap that impedes our understanding of the principal threats facing the population.

The northern resident killer whale population experienced a decline of 7% between 1997 and 2003, and similar to southern residents, has since increased to 205 members in 2003. The population appears to spend the majority of its time from Campbell River and Alberni Inlet northwest to Dixon Entrance, but has been sighted as far south as Grays Harbor, Washington, and as far north as Glacier Bay, Alaska (C.M. Gabriele, personal communication). A portion of the population is regularly found in Johnstone Strait and southeastern portions of Queen Charlotte Strait (and adjoining channels) during the summer and fall, and this area is identified as critical habitat based on this consistent seasonal occupancy. Other areas are likely very important to northern residents during this time but they have yet to be clearly identified. Similarly, areas that may constitute critical habitat during the winter and spring are not yet known. Northern residents also appear to feed primarily on chinook and chum salmon during the summer and fall. However, like southern residents, very little is known of their winter distribution and diet, and this knowledge gap must be addressed to fully understand the principal threats affecting the population.

The goal of the resident killer whale recovery strategy is to:

In order to achieve this goal, four principal objectives have been identified. These include:

Objective 1: Ensure that resident killer whales have an adequate and accessible food supply to allow recovery.

Objective 2: Ensure that chemical and biological pollutants do not prevent the recovery of resident killer whale populations.

Objective 3: Ensure that disturbance from human activities does not prevent the recovery of resident killer whales.

Numerous broad strategies are outlined herein to achieve these objectives. However, significant gaps in knowledge about killer whales remain and numerous actions have been identified to address these knowledge gaps and to identify further directions for recovery. Action plans are recommended to address the threats and issues of knowledge gaps regarding 1) resident killer whale population dynamics and demographics, 2) reduced prey availability, 3) environmental contaminants, 4) physical disturbance, 5) acoustic disturbance, and 6) critical habitat. Action plans will be developed before March 31, 2013.

Note that there are also small discrepancies in the southern resident counts in the literature due to different methods of recording when whales are considered to enter or leave the population. For example Krahn et al. (2004) report 83 southern residents in 2003.

Culture refers to a body of information and behavioural traits that are transmittedwithin and between generations by social learning.