Table of contents
Next page

The Canadian Protected Areas Status Report series examines the state of terrestrial and marine protected areas in Canada, including network design, system planning, and protected areas establishment and management. There have been two previous Canadian Protected Areas Status Reports covering the periods from 2000 to 2005 and from 2006 to 2011 respectively.

This report is the third in the series and covers the period from January 1, 2012 to December 31, 2015. The report provides information on the current state of protected areas in Canada and recent trends. Information is provided for Canada’s protected areas system as a whole and at the federal, provincial and territorial levels respectively.

Departments and agencies that contributed to the report

The Canadian Protected Areas Status Report 2012-2015 was produced by Environment and Climate Change Canada (Charles Shulman, Susanne Emond, Courtney Robertson, Eden Thurston, Olaf Jensen, Said Akif, Amy Huang, and Chris Lauzon) in close collaboration with provincial and territorial governments, Fisheries and Oceans Canada, and Parks Canada Agency, under the supervision of federal, provincial and territorial Assistant Deputy Minister members of the Conservation, Wildlife and Biodiversity Steering Group. The report is based on information and data provided by a number of government organisations (hereafter referred to as protected area organisations) and would not have been possible without the support of dedicated staff from the following organisations:

This report builds on the work of the Canadian Council on Ecological Areas which has been instrumental in creating the mechanisms that make national level reporting on protected areas possible in Canada, including a network of federal, provincial and territorial protected areas experts, the Conservation Areas Reporting and Tracking System database, and the status report questionnaire.

The information in this report was generated from data provided by Canada’s federal, provincial and territorial protected area organisations through two main channels: the Conservation Areas Reporting and Tracking System and the Canadian Protected Areas Status Report questionnaire. Responsibility for source data accuracy and completeness lies with the protected areas organisations.

All of the protected areas included in this report meet the International Union for Conservation of Nature’s definition of a protected area:

A clearly defined geographical space, recognised, dedicated and managed, through legal or other effective means, to achieve the long-term conservation of nature with associated ecosystem services and cultural values.Footnote1 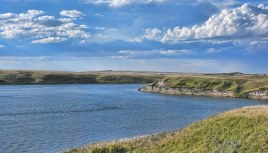 Changes since the last report

Information on protected area coverage within Canada’s terrestrial and marine ecological regions is based on analysis using an updated ecological framework for Canada. The update to the existing EcozonesPlus framework improves the alignment of ecozones across jurisdictional boundaries, including provincial, territorial and international boundaries, and integrates new ecological information being used by provincial and territorial governments into the national level framework. In addition, three new ecozones have been added: Tundra Cordillera, the Yukon portion of an ecological region in Alaska; Semi-Arid Plateaux, an extension of an ecological region in the United States that stretches into southern British Columbia; and, Atlantic Highlands a new ecozone that distinguishes Quebec and New Brunswick’s highland areas from the rest of the Atlantic Maritime Ecozone. Changes were made only at the broadest level of the framework, the level of ecozones, which provides a useful level of generalization for national reporting. The update did not modify the boundaries of finer scale ecoregions or ecodistricts. The update was completed in 2014 by the Canadian Council on Ecological Areas in collaboration with provincial and territorial governments. More information can be found on the Council’s website.

Gatineau Park, managed by the National Capital Commission is also included in the report.

See Chapter 2 for an overview of domestic and international area-based conservation targets.

Table of contents
Next page