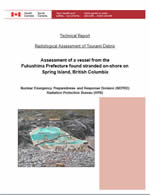 On March 11, 2011, a devastating earthquake and tsunami struck Japan. The combined impact of these events damaged the Fukushima Daiichi nuclear power plant, releasing radioactive material into the surrounding region, including the ocean. In addition to the devastation caused by the earthquake and tsunami, millions of tonnes of debris were washed into the ocean with the receding waves.  The Japanese Tsunami Debris Coordinating Committee (JTDCC), a joint committee chaired by senior representatives from the British Columbia (BC) government and Government of Canada, was established to coordinate amongst the various levels of government a management strategy for debris that could arrive on the west coast of Canada.

On August 9, 2012, a small Japanese vessel was found on Spring Island, just off the North West coast of Vancouver Island, BC.  Emergency Management British Columbia confirmed that this vessel was lost during the 2011 Japan tsunami and that it came from the Fukushima prefecture. The fact that this fishing vessel was the first item of tsunami debris found in Canada to be identified as coming from the Fukushima area generated significant interest from agencies in the province of British Columbia, and federal agencies in both Canada and the United States.

On September 9, 2012, a field team from Health Canada's Radiation Protection Bureau's Nuclear Emergency Preparedness and Response Division (NEPRD) was deployed to Spring Island with the support of the Royal Canadian Mounted Police (RCMP) to take radiation measurements on the fishing vessel.  The field and laboratory assessments performed on the vessel and adjacent shoreline (8 metre radius) showed that there was no detectable trace of radiation.

A copy of the full report is available upon request at the following address:
NEPRD-DPIUN@hc-sc.gc.ca