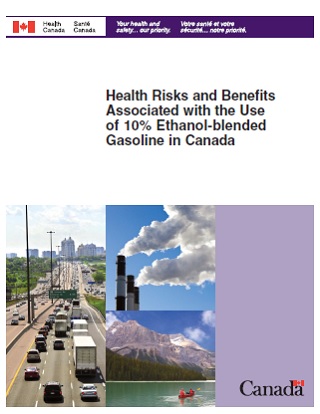 Air pollution and climate change concerns have prompted governments to introduce measures to reduce the use of fossil fuels. One recent fossil fuel reduction initiative that has been widely implemented is the "greening of fuel" by the addition of ethanol to gasoline. Health Canada has completed a risk assessment evaluating the potential risks and benefits to the health of Canadians from the use of E10, a formulation of gasoline containing 10% ethanol per volume. E10 is the most common proportion for ethanol-blended fuel and is considered usable in gasoline engines without the need for mechanical modifications.

The risk assessment of E10 fuel focused on the human health implications due to changes in air quality that might arise from its widespread use in Canada. The risk assessment compared the health impacts of E10 blended fuel to those of conventional gasoline. Risk characterization was performed for: ozone (O3), nitrogen dioxide (NO2), particulate matter of 2.5 µm or less in diameter (PM2.5), sulphur dioxide (SO2), carbon monoxide (CO), acetaldehyde, benzene, 1,3-butadiene, formaldehyde, ethanol, and peroxyacetyl nitrate (PAN). Other possible emissions from the production, transportation, and distribution of E10 fuel, and the potential effects of leaked E10 fuel on aquifer contamination were beyond the scope of this analysis. Potential health benefits from reduced greenhouse gases due to the use of renewable fuel (ethanol) and its economic impacts were also beyond the scope of this assessment.

Ambient concentrations of hazardous air pollutants were determined using a combination of: modelling of vehicle emissions; quantification of changes in the emission inventory based on changes in vehicle emissions; and, atmospheric modelling. To assess the impact of E10 fuel, two geographical regions of Canada were considered:

Atmospheric modelling of both the West and East domains indicated that widespread use of E10 had almost no impact on concentrations of several criteria air contaminants (NO2, SO2, O3, and PM2.5) and formaldehyde, and some impact on pollutants primarily associated with traffic (benzene, 1,3-butadiene, acetaldehyde, and CO), compared to conventional gasoline. Overall, atmospheric modelling results indicated that a change to E10 fuel in Canada would not substantially change the levels of pollutants observed in ambient air.

For the criteria air contaminants (CO, NO2, O3, PM2.5, and SO2), human health risks and benefits for the widespread use of E10 fuel were estimated using Health Canada's Air Quality Benefit Assessment Tool (AQBAT). Changes in cancer risk due to a change in fuel were estimated for exposure to benzene, 1,3-butadiene, formaldehyde and acetaldehyde. Overall, there were no substantial differences in the predicted health effects for the widespread use of E10 fuel compared to conventional gasoline.

To obtain an electronic copy of the document, Health Risks and Benefits Associated with the Use of 10% Ethanol-Blended Gasoline in Canada, please contact hc.air.sc@canada.ca. The report is also available for download.