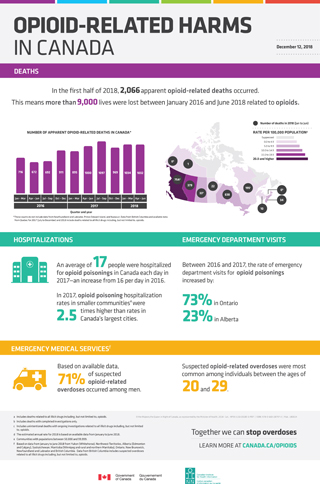 An average of 17 people were hospitalized for opioid poisonings in Canada each day in 2017–an increase from 16 per day in 2016.

Between 2016 and 2017, the rate of emergency department visits for opioid poisonings increased by:

Based on available data, 71% of suspected opioid-related overdoses occurred among men.

Suspected opioid-related overdoses were most common among individuals between the ages of 20 and 29.

Together we can stop overdoses

Based on data from January to June 2018 from Yukon (Whitehorse), Northwest Territories, Alberta (Edmonton and Calgary), Saskatchewan, Manitoba (Winnipeg and rural and northern Manitoba), Ontario, New Brunswick, Newfoundland and Labrador and British Columbia. Data from British Columbia includes suspected overdoses related to all illicit drugs including, but not limited to, opioids.