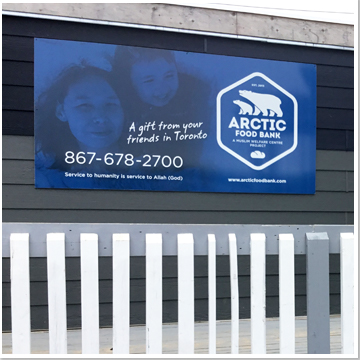 It’s not every day that hunger in a small Northwest Territories town catches the attention of a charity 6,500 kilometres to the south. But that’s exactly what happened when Muhammad Iqbal Ali heard about some of the problems facing people in Inuvik.

Iqbal is Vice-President of the Muslim Welfare Centre (MWC) in Toronto, an organization founded in 1993 by his parents after they immigrated to Canada from Pakistan. Helping Canadians in need, no matter where they live, is one of the centre’s priorities. So when Inuvik came to Iqbal’s attention in 2014, he hopped on a plane to see it for himself.

He encountered a range of resource shortages contributing to despair and hopelessness. “Energy and food costs are high, opportunities are lacking, there is homelessness, and young people feel disconnected”, he says.

A key issue was food insecurity, and Iqbal knew he could do something about that. He thought there had to be a way for the MWC to join forces with Inuvik’s Muslim community and Indigenous residents to bring groceries to those in need.

“The Arctic Food Bank initiative created by the Muslim Welfare Centre shows how important it is to bring new people to this country and the significant contributions they make to their communities – and beyond”.

The first step was connecting with the Midnight Sun Mosque in Inuvik. The MWC then purchased the parking lot behind the mosque, set up contracts with suppliers and shipping companies, and teamed up with local people to build the food bank, which opened its doors just 8 months later, in May 2015.

Since then, the Arctic Food Bank has become Inuvik’s largest charity, providing groceries to more than 200 families biweekly. People travel to Inuvik from as far as Tuktoyaktuk and other remote communities for the food bank. As well as sourcing non-perishable goods from Edmonton and Calgary, the food bank offers local meats from hunters when possible. Immigrant and Indigenous volunteers hand out food and organize inventory.

“Food is just one resource of many that are needed, but it’s an important one”, says Iqbal. “And we are sharing the message that the rest of Canada cares”.

A sign posted outside the food bank says, “A gift from your friends in Toronto”.

Yunis Omer, a regular volunteer at the food bank, immigrated to Canada from Africa and has been living in Inuvik for more than 12 years. “We saw a big gap in this type of service and we wanted to provide food for families that were struggling financially”, says Yunis, who was part of the group that initially brainstormed ways to help. Many members of Inuvik’s small immigrant community, primarily from Africa, were keen to contribute.

The MWC has pioneered 15 charities to date, including several school nutrition programs in Ontario. 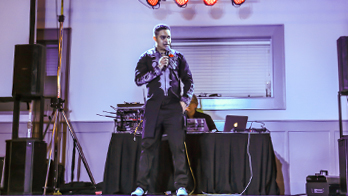 Inspiring a city through the power of dance

From landscaper to volunteer firefighter, to a paramedic and founder of a dance troupe, there is very little that Louis Gaëtan hasn’t done for his community since his arrival in Yellowknife in 2012. 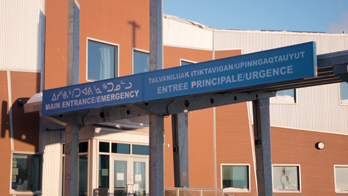