There has been only 1 vessel named Coquitlam in the Royal Canadian Navy. 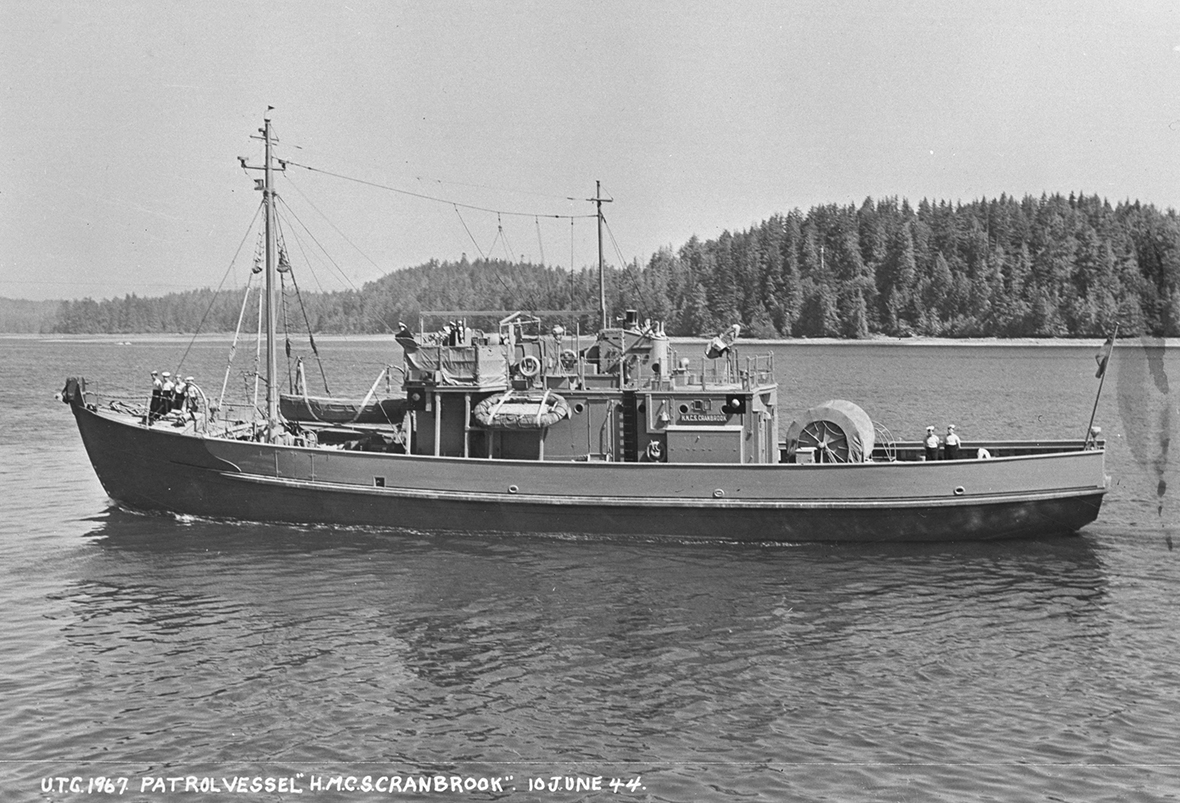 With the entry of Japan and the United States into the Second World War in 1941, Naval authorities on the west coast were faced with the likelihood of Japanese submarine and mining activities for the first time. It was recognized that the existing steel-hulled Bangor, Suderoy and Fundy Class minesweepers were only partially adequate against magnetic mines, degaussing being difficult and not completely effective. Smaller wooden minesweepers, which could be more easily degaussed, were ordered instead – 8 for the west coast and 2 for the east coast. HMCS Coquitlam, 1 of the 10 wooden-hulled Llewellyn Class minesweepers, was built by the Newcastle Shipbuilding Co. Ltd., Nanaimo, British Columbia, and was commissioned there July 25, 1944. She was equipped with “double-L” magnetic minesweeping gear. She was employed on the west coast mainly as a patrol vessel, alternating between Esquimalt Force and Prince Rupert Force until the end of 1945.

In 1944 and 1945, her main duties were patrolling Area C, which was comprised of the Chatham Sound, Lucy Islands, Whitly Point, Chismore Passage, Big Bay, as well as small craft examination. Often on these patrols, Massett was the first stop and HMCS Coquitlam would deliver stores, personnel, mail etc. HMCS Coquitlam would also carry out different training exercises such as machine gun shoots and having the entire ships company exercised with rifles. On May 8, 1945, while berthed at Port Simpson, the crew was invited to take part in a Victory-in-Europe Celebration – the entire crew marched and participated in a memorial service for the men of this town who were lost during the European War.

HMCS Coquitlam was paid off November 30, 1945, handed over to the War Assets Corporation December 5, 1945 and sold in 1946 to the Anticosti Shipping Company. A letter dated February 21, 1947, from the shipping company, states that she was converted and renamed Wilcox and would be running from Gaspé, Québec, to Anticosti Island, Québec, carrying bushmen and a small quantity of freight for the Island. In the following years, the company operated her between the ports of Gaspé and Rivière-aux-Renards and the Island and she serviced the salmon fishing camps and lighthouses all around Anticosti. The Wilcox went aground at Carleton Point, Anticosti Island, on June 17, 1954. Her hull is still there as salvage attempts in 1967 failed.

There is no known photo of HMCS Coquitlam during her naval service; a photo of her sister-ship HMCS  Cranbrook has been used.