Cancer is a life-threatening and increasingly prevalent condition with expensive emerging treatments that patients often cannot afford and payers struggle to fund, and there are unique complexities when it comes to the coverage of these medicines. As per the provisions of the Canada Health Act, oncology medicines administered in hospitals are fully covered by public budgets and provided at no cost to patients, while take-home medicines, an emerging standard treatment for many cancers, are covered through a mix of public and private reimbursement, with the potential for interprovincial variations in the listing and source of funding.

In Canada, there are several public funding options for cancer medicines through hospital drug budgets, the provincial drug plans, and/or the provincial cancer agencies. This study compares provincial formulary listing rates and examines agreement in listing decisions between pairs of provinces for 40 hospital and 47 take-home oncology medicines. Of the total selected market, hospital medicines represented 55% of sales while take-home accounted for 45%. Programs were considered to be in agreement if both provinces had the same listing decision: either to list or not to list the given medicine. The analysis also considers differences in provincial spending and payer split between jurisdictions.

The oncology medicines included in this analysis were reviewed from March 1, 2007, through March 31, 2019, by the interim Joint Oncology Drug Review (iJODR; 2007-2010) or the pan-Canadian Oncology Drug Review (pCODR; 2010-2019), with listings on public formularies for the pCODR-participating provinces, as well as the public programs in Quebec, as of March 31, 2020. A list of medicines reimbursed by private drug plans was obtained for 2019. Spending and weighted listing rates were based on Canadian national retail and hospital sales in 2019.

1. The coverage rates of hospital and take-home medicines are comparable across many Canadian provinces.

Formulary listing rates for hospital and take-home medicines were nearly identical in the western provinces, which have universal programs for oncology medicines, and were also very similar in provinces with different funding mechanisms, with some interprovincial variability within both segments.

The average public listing rate for hospital medicines was 82%, ranging from 60% in Prince Edward Island to 90% in British Columbia, Saskatchewan, and Manitoba. Take-home medicines had a slightly higher average listing rate, at 86%, with Prince Edward Island on the low end at 64% and Saskatchewan on the high end at 94%. The weighted average listing rates were consistently high for both hospital and take-home medicines in the majority of the provincial drug programs, at an average of 98% and 96%, respectively.

Private drug plans reimbursed patients for 68% of the hospital medicines and all take-home medicines.

2. In both the hospital and take-home market segments, most oncology medicines are listed in at least six provinces.

A vast majority (85%) of hospital medicines were listed on six or more of the 10 provincial formularies, with 48% listed in all provinces and 38% listed in six to nine. These medicines accounted for 99% of Canadian sales for the select hospital oncology medicines in 2019.

Take-home medicines showed a similar distribution: 89% were listed on six or more provincial formularies, with 51% in all provinces and 38% in six to nine. These medicines accounted for 97% of sales for the select take-home medicines in 2019.

The bilateral agreement rates between pairs of provinces, both in terms of the number of medicines covered (unweighted) and their corresponding national sales (weighted), were nearly the same for hospital and take-home oncology medicines.

4. Per capita spending varies across provinces for both hospital and take-home medicines.

Overall, spending on hospital medicines was consistently higher than take-home medicines in 2019, with a national average of 55% versus 45%.

The top provinces in per capita spending on hospital medicines were also at the top for spending on take-home medicines. New Brunswick and Quebec ranked first and second, respectively, for both categories, while the Prince Edward Island and Newfoundland and Labrador were third for hospital medicines and sixth for take-home medicines. Western provinces, apart from British Columbia, spent significantly less per capita for both segments.

These variations may be influenced by jurisdictional differences in the model of cancer care, drug plan designs, policies, clinical practice, demographics, and disease profiles of the provincial population.

Figure 4. Provincial sales per 100,000 population for hospital and take-home medicines, 2019 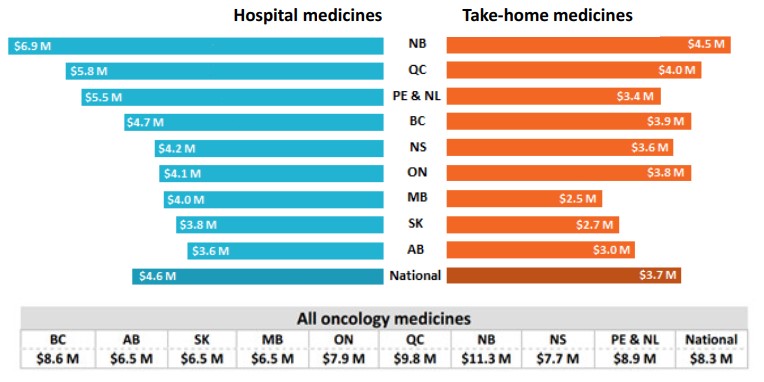 * Prince Edward Island and Newfoundland and Labrador are reported together in the IQVIA Canadian Drugstore and Hospital Purchases Audit (CDH) database and have therefore been combined for this analysis.

5. While hospital medicines are financed consistently across the country, the payer split for take-home medicines differs significantly between provinces.

Oncology medicines administered in hospitals are universally covered by hospital budgets in Canada, though there may be medicines from our selection that the hospital formularies do not list. For this reason, an average of 96% of the selected medicines were paid by public budgets in 2019 and only 4% by private payers.

The data shows greater variability in the reimbursement of take-home oncology medicines. Public drug programs in the western provinces, where provincial cancer agencies offer universal and first dollar coverage for all cancer medicines, paid 83% to 88% of take-home oncology medicines in 2019. Quebec, which offers universal coverage but requires premiums, paid for 70% of the medicines from public budgets, while Ontario and the Atlantic provinces are not as comprehensive in terms of coverage, resulting in greater contributions from private insurers.

* Prince Edward Island & Newfoundland and Labrador are reported together in the IQVIA Canadian Drugstore and Hospital Purchases Audit (CDH) Database and have therefore been combined for this analysis.
† The payer split is a PMPRB estimate based on various data sources. Private payers include both private insurers and cash-paying patients.

Note:
Quebec listing statuses were based on the available data published by the Régie de l'assurance maladie du Québec (RAMQ) on April 29, 2020.

Limitations:
Sales weights are based on overall national retail and hospital sales. Medicines not commonly reimbursed or reimbursed by smaller plans may have lower related sales and sales data for some of the selected medicines may not be available in the IQVIA CDH database; this may have a slight impact on some of the results.

Disclaimer: Although based in part on data provided by the IQVIA and Canadian Institute for Health Information (CIHI), the statements, findings, conclusions, views and opinions expressed in this report are exclusively those of the PMPRB and are not attributable to IQVIA or CIHI.