The Public Health Agency maintains the NESS to provide emergency supplies to provinces and territories when requested. In the event of a local emergency that overwhelms available municipal resources, the municipality contacts the provincial/territorial emergency management authorities for additional resources. When provinces and territories cannot supply the required resources, they can request surge resources from the NESS. Release of equipment or supplies is coordinated through the provincial/territorial Health or Social Services Director.

The system consists of a series of warehouses and pre-positioned sites. Precise locations of any of the warehouses/sites are not made public for security reasons.

The NESS contains a variety of assets. The program categorizes its assets as follows (see Appendix D for a detailed list of components):

These supplies have been deployed domestically and internationally in response to a variety of public health events and other emergencies, and in preparation for mass gatherings. Responses have been medical and/or social service in nature.

The program also indicated that the NESS warehouses medical supplies and/or pharmaceuticals for other government departments or agencies, including: the Canadian Food Inspection Agency, the Department of National Defence and Health Canada.

Each module comprises the equipment necessary to provide assessment and care similar to that of a walk-in clinic. This configuration allows certified health care providers the capability to care for patients for a 72-hour period.

This resource is intended to supplement existing medical care facilities in a disaster situation that overwhelms a local health care system. It would be located adjacent to these facilities to triage and treat the less seriously injured.

In 2010-11, the mini-clinics were successfully pre-deployed to sites in advance of the 2010 Winter Olympic and Paralympic Games, the G8/G20 Summits and the Canada Youth Winter Games. The mini-clinics were available if needed; however, they were not drawn upon for these events.

2.2 The history of the NESS program

Preparing for the worst

The NESS program was created in the 1950s as part of a civil defence plan against a potential nuclear attack arising from the Cold War that would threaten the infrastructure of major Canadian cities. In response to this perceived threat, the NESS program was established to enable a sustainable medical and social services response to a nuclear disaster. The authority for the then Minister of National Health and Welfare to stockpile supplies is based on a Cabinet decision on January 11, 1952.[Link to footnote 2]

The initial, centrally managed and stored stockpile consisted of a variety of medical and social service provisions (1950s and 1960s):

Given the social, economic and political environment during the Cold War period, the concept of a national stockpile was well founded. There were significant lag times for manufacturing goods and limited transportation options; in contrast, warehousing costs were relatively inexpensive. Importantly, at that time, the health care system at the local level had more limited capacity to respond to a large-scale emergency than it does today.

Over time, the threat of a nuclear attack decreased, and the scope of the NESS program expanded to include the capacity to respond to technological and natural disasters. In 1964, Cabinet decided to relocate some of the NESS supplies to a number of regional federal depots and to pre-position other supplies within each of the provinces and territories.

Since 2001 the majority of the NESS purchases have been pharmaceuticals. The tragic events of September 11, 2001 initiated an important shift in focus in emergency preparedness planning around the world. The threat of a bioterrorist attack triggered a gradual expansion of the NESS stockpile, with the accumulation of a unique set of chemical, biological, and radio-nuclear (CBRN) countermeasures (such as vaccines or antidotes for smallpox, botulism and anthrax) to deal with this new threat.

In 2004, following the Severe Acute Respiratory Syndrome (SARS) outbreak, the Public Health Agency was established to provide a focal point for federal leadership in managing public health emergencies and improved collaboration within and among jurisdictions. Still part of the federal Health Portfolio, the NESS assets were transferred from Health Canada to the newly created Public Health Agency.

In 2011, the public health threats in our current environment are complex: natural disasters, new emerging pathogens, and accidents or terrorism acts involving explosives, chemicals, biological threats or radioactive substances. These events potentially present a risk to Canadians' health and well-being.

At the same time, over the last 60 years there have been significant changes in the context in Canada:

Much dialogue on "modernization" of the NESS

Over the past three decades, numerous reviews/audits and research reports have focused on the so-called "modernization" of the NESS program, including the following from the past few years:

The majority of findings and recommendations from these previous reports have been consistent, as reflected in the latest report, the 2010 Audit of Emergency Preparedness and Response:

While each report indicated that minimal progress had been made to date to address previous recommendations, it should be noted that the Centre for Emergency Preparedness and Response is currently actively responding to the recommendations outlined in the 2010 Audit report. For example, to support evidence-based decision making, the establishment of a Pharmaceutical and Therapeutic Committee has recently been approved and a Material Supply and Equipment Committee is under development.

As mentioned in the 2010 Audit on Emergency Preparedness and Response, the Public Health Agency does not have an electronic inventory system for the NESS program. While the development of an electronic inventory system has been initiated, at this time it is not possible to know how many items have been in stock since the inception of the program in 1952 to the present date. It is also not possible to estimate the percentage of supplies in the stockpile that have been deployed compared with those that have not been deployed over the program's history.

While international data is available from 1960 to 2010, domestic deployment information is only available for the past 25 years (1985 to 2010). Deployment information is also subject to recording error, which could affect how supplies were classified (medical, social or pharmaceutical) or how an event was classified (technological disaster versus supply disruption i.e. NESS providing supplies to other parties to respond).

There were also significant gaps in the international data available. When it has been unclear, the data has been coded as "unknown":

With these limitations in mind, we can offer the following depiction of how the NESS stockpile has been deployed over the past 25 years.

Over the past century, there have been about 1,000 Canadian disasters. These events have been primarily meteorological/hydrological (floods, wildfires, tornadoes, etc.), technological (industrial fires) and biological (pandemic influenza) in nature. There have been far fewer cases of geological (earthquake) or conflict-related events in Canada.[Link to footnote 5]

According to records kept by the Agency, the NESS program has been deployed 128 times in the past 25 years (1985 to 2010) to respond to a domestic event as a result of a hazard:

Closer scrutiny of the items contained in these categories reveal that beds, stretchers, blankets and reception kits/cards accounted for approximately two-thirds of all items deployed.

While there is no specified mandate to provide supplies from the stockpile to assist in international public health events, over the past 25 years, the stockpile has been deployed internationally at least 22 times. Whereas domestically we saw a greater need for social service supplies in response to natural disasters, internationally there was a greater need for health supplies in response to conflicts or geological events. Deployments have included support for the response to the tsunami in Southeast Asia (2005) and after Hurricane Katrina in the United States (2005) and, more recently, the earthquake that occurred in Haiti in 2009 (supplies were distributed in 2010). These types of events have been catastrophic in nature, with high morbidity and injury rates.

Medical equipment and supplies represented the largest proportion of the supplies deployed internationally (44%), followed closely by pharmaceuticals (37%). A smaller proportion was classified as social service supplies (18%). Only one kit, a mobile feeding unit, was ever deployed (1%).

As in the case of domestic responses, one deployment could include social service and medical supplies as well as pharmaceuticals. For example, after the tsunami in 2005 in Southeast Asia, generators (coded as medical equipment), water bladders (coded as social services) and many pharmaceuticals, such as antibiotics and acetaminophen, were provided to CIDA for its response. 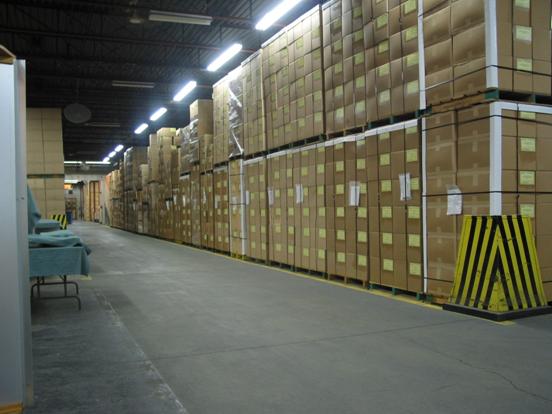