How Young People are Victimized 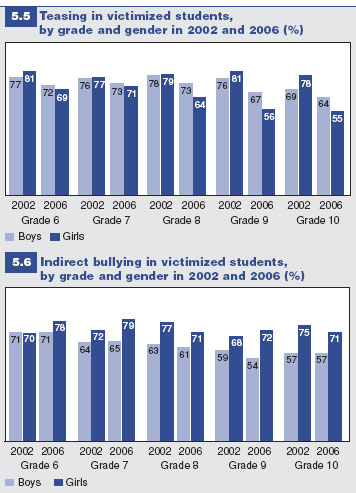 Figures 5.5 to 5.11 display data for those students who report being victims or bullyvictims.

This survey cycle was the first time that the HBSC study asked students about electronic or cyber bullying, including computer postings, emails, digital photos, or cell phone harassment. Girls report that they experience more cyber bullying than boys in all grades (Figure 5.11).

Physical fighting is an extreme form of aggression and merits serious attention. Figure 5.12
shows that, compared to 2002, students are more involved in physical fights. Significantly
more boys than girls in all grades report physical fighting behaviour. For boys, fighting
behaviour decreases with age, while girls’ fighting is more consistent across grades.

Almost one-half of boys indicate that the target of their physical fights is most often a
friend or acquaintance (Figure 5.13), while girls indicate that they are most likely to fight
with a sibling (Figure 5.14). It may be that girls are more likely to be aggressive within the
confines of intimate family relationships or that it is more acceptable to fight within these
relationships. Older students, especially boys, are more likely to fight with strangers, which
could put them at risk for serious injury (not shown).

The proportion of students who carry weapons is similar to that for fighting behaviour.
Seventeen percent of boys and 4% of girls report carrying weapons in the past 30 days
(not shown).

As illustrated in Figures 5.15 and 5.16, those students who carry weapons most often
carry knives. Fourteen percent of boys who carry weapons report that they carry handguns
or other firearms. More girls who carry weapons carry tear gas or pepper spray. The potential
risk for harm and escalating violence is of extreme concern with the increased availability
and presence of weapons.