ARCHIVED: Summary: Young people in Canada: their health and well-being

Young people in Canada: their health and well-being (Full Document)

The Health Behaviour of School-Aged Children (HBSC) Study is a cross-national study supported by the World health Organization. In Canada, the HBSC surveys have been funded by Health Canada. Young people in Canada: their health and well-being, a 136-page report, presents the findings from the three surveys conducted in Canada since 1989-90. This Summary highlights some of those findings.

The analysis, views and opinions expressed are those of the authors and do not necessarily reflect the position or the policies of Health Canada.

Young people in Canada: their health and well-being is available in both English and French in hard copy from:

The Health Behaviour in School Aged Children (HBSC) survey has been carried out in Canada every four years since 1990 by the Social Program Evaluation Group at Queen's University in partnership with Health Canada. The HBSC study is sponsored by the World Health Organization, and includes research teams from 35 countries in Europe and North America.

The HBSC 2001-2002 survey uses the population health framework, promoted by Health Canada, and recognizes the broad sets of determinants of health and health behaviours in children and youth. Three age groups (11-, 13-, and 15-year-olds) are included as being representative of critical periods of early adolescent development. More than 7000 students from five grades (6, 7, 8, 9, and 10) were selected to represent these age groups across Canada. The main purpose of the HBSC study was to examine patterns in the determinants of health of these age groups as well as selected trends in their health behaviours and attitudes. The main findings are summarized below.

Socio-economic inequalities are related to a variety of health outcomes in Canadian youth. In the HBSC sample, over half of the students surveyed indicated that their families were well off, although this decreased for students in the older grades. At the same time, on average, 13 percent of students reported at least sometimes going to bed hungry because of lack of food at home. Students whose families were relatively affluent or very affluent also reported that they were healthy and satisfied with their lives, which emphasizes the link between socio-economic factors, self-reported health, and life satisfaction among youth.

Adolescents who have a good relationship with their parents demonstrate positive psychosocial functioning and less involvement in risk taking. There were clear gender differences in students' relationships with their parents. Girls reported more strains in these relationships than did boys. For example, older girls reported more difficulties talking to their fathers, felt less understood by their parents, and were less satisfied with their home life than both boys their age and yonger girls. Girls also reported that they had more arguments with their parents and a greater desire to leave home. Having a good relationship with parents was related to higher life satisfaction in both genders and served as a protective factor against involvement in risk-taking behaviours, such as smoking, getting drunk, and using marijuana. In addition, students with middle or high family affluence not only felt that their parents provided them with the support they needed at school but also reported being highly satisfied with their home life.

Having friends is fundamental to adolescent development. Boys, especially in the lower grades, found it harder to communicate or discuss their troubles with same-sex friends than did girls. The HBSC data show that younger boys and girls were less comfortable in opposite-sex interactions than in same-sex friendships. The ease of communication with members of the opposite sex improved for older students as they gained more confidence. Time spent with friends is a good indicator of adolescents' involvement with their friends. Boys tended to spend more time with peers, both after school and in the evenings, than did girls.

A large portion of Canadian adolescents' lives are spent in schools interacting with teachers and peers. Most students in the 2002 Canadian HBSC survey liked school, but after peaking in 1994, the proportion of students who liked school has dropped steadily. Secondary students' perception of school tended to be more negative than that of elementary students, and boys had more overall negative views of school than did girls.

Being happy at school was related to the perception of having good and fair teachers, supportive relationships with teachers, and an increased sense of autonomy in the classroom. However, students in higher grades felt they had less say in how class time was used. More boys than girls reported school work to be difficult, yet boys also indicated that they spent less time doing homework and that their teachers expected too much of them at school. A major finding was that students who had positive experiences at school were less likely to be involved in health risk behaviours such as smoking, drinking, and using marijuana. It is important that schools provide a supportive, interesting, and engaging environment for students within which they can feel accepted.

Experimenting with tobacco, alcohol, and marijuana is considered normal for many adolescents. Some adolescents go beyond the experimentation stage to the extent that these behaviours create a health-compromising lifestyle with consequences for physical health. Health risk behaviours tend to occur together in youth and should not be addressed individually.

It is encouraging to note a decline in 2002 daily smoking rates in older girls, and also in Grade 8 students compared with previous HBSC surveys. 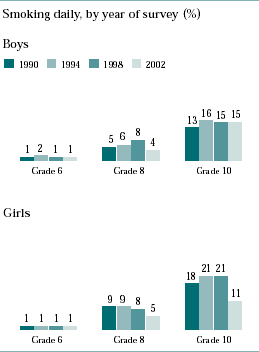 Experimentation with alcohol occurred in younger students in the Canadian sample, with rates of alcohol consumption increasing significantly between the ages of 12 and 14 years. Interestingly, almost as many girls as boys reported engaging in binge drinking, which indicates that excessive alcohol use may be a feature of adolescent social events. Marijuana use was still popular among adolescents in 2002 and increased in use among Grade 10 boys. Those who used marijuana were more likely to smoke, drink, engage in sexual risk taking, and report poor relationships with parents and negative feelings about school. The use of other drugs remained fairly stable among youth, except for LSD use, which decreased considerably since 1998.

Questions regarding sexual behaviour were addressed for the first time in this HBSC survey. Data show that slightly over one-quarter of students in Grade 10 have had sexual intercourse. However, only two-thirds of those sexually active students used condoms the last time they had sexual intercourse, and just under one-half used birth control pills.

Healthy living for youth includes a wide range of behaviours, such as following a healthy diet, being involved in both organized and casual physical activities, and trying to maintain an optimum weight. In the Canadian HBSC sample, girls ate more nutritious foods such as fruits and vegetables than did boys. However, more girls than boys skipped breakfast and reported dieting or doing something else to lose weight, especially in the higher grades. Boys, more than girls, consumed foods high in sugar, salt, and caffeine, such as soft drinks, diet soft drinks, potato chips, french fries, and cake or pastries.

Physical exercise is necessary for growth and development as well as for the promotion of self-esteem. Student levels of physical activity were encouraging, although surprisingly low levels of exercise were reported within schools. It is interesting to note a significant gender difference in physical activity, both in and out of school, indicating that engagement in sports is still primarily a male domain and that schools could do more to involve girls in physical activities. Younger girls seemed to participate more in clubs or organizations, although the gender difference disappeared in Grades 9 and 10. Levels of television watching can be an indication of a sedentary lifestyle. A high proportion of students reported that they watched several hours or more of television each day. Recreational computer use was also quite high, with more than two-thirds of older students stating that they spent at least one hour each weekday playing computer games.

Bullying takes many forms, including verbal harassment, teasing, spreading rumours or lies, and excluding others, in addition to physical bullying such as pushing or kicking. Bullying most frequently happens at school and under conditions where there is little adult supervision. In the HBSC sample, over 20 percent of students reported that they were both bullies and victims of bullying, although more students reported being bullied compared with those who reported bullying others. This difference indicates that young people who are victimized experience aggression differently than do bullies. Therefore, educational programs should explain the different forms of aggression and their harmful consequences. HBSC data show that sexual harassment reported by girls increased with age and peaked in Grade 9. Harassment because of race, ethnicity, and religion is a form of bullying that was reported by more boys than girls. Also, boys reported more physical fighting, and frequent fighting, than did girls, and this peaked in Grade 7. Boys most often fought with friends or acquaintances, while girls were equally likely to fight with their siblings.

Injuries are among the most important health problems that young people face during their school-aged years. As many as 50 percent of Canadian students reported having had an injury requiring medical attention during the past year. These injuries ranged from sprains and strains to lacerations, bruises, fractures, and head injuries. Boys consistently experienced more injuries than did girls, and the incidence of injuries peaked for both in Grade 8.

The HBSC study examined the circumstances surrounding youth injuries. The vast majority of sports and other types of injuries happened in controlled environments, including the home, school, or sports facilities. Interestingly, the percentage of injuries that occurred during organized activities increased substantially in the older grades. Strategies to prevent injuries should combine regulations and ongoing educational campaigns to ensure that the message is consistent.

The majority of students in the survey reported good emotional health. However, between 20 percent and 30 percent of students said that they had some form of emotional or physical (psychosomatic) complaint. Girls, compared with boys, reported higher levels of depression and headaches, which increased with age. Backaches and irritability were similar between the genders. On all measures, emotional health tended to worsen with age. An especially critical point for girls' emotional health appeared by Grade 7, at which time they may require additional support to cope with life and body changes. In general, students who reported fewer psychosomatic symptoms were more satisfied with their lives. 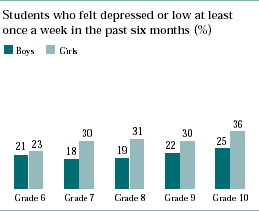 From a population health perspective, the most powerful determinants of youth physical and emotional health evident from the 2002 HBSC survey were gender, family affluence, school conditions, and the influence of peers on risk taking.

Clearly, broad policy responses to this range of potential determinants will be required. Federal, provincial, territorial, municipal, professional, and business sectors need to discuss the health of the next generation openly with youth themselves. Youth have had insufficient attention among these sectors, in part because of the transitional character and independence-seeking nature of adolescence. When initiatives are focused on adolescents, efforts to engage youth in policy and program development need to be strengthened. The development of an inclusive, cross-sectoral "Middle Childhood and Adolescent Agenda" in Canada would contribute to the visibility and viability of policy initiatives and may also earn widespread youth approval and participation.