To provide an overview of the organizational reporting results stemming from Annex D of the Appointment Delegation and Accountability Instrument (ADAI) for year 2 and convey early trend indicators (if any). This includes:

Results for exceptions to National Area of Selection (NAOS)

In 2008, the PSC implemented an NAOS requirement for jobs open to the public, with a provision that deputy heads request an exception to this requirement from the PSC, on a case by case basis. Five requests were received from 2008 to March 2016, and all were approved.In April 2016, the revised Appointment Policy maintained NAOS and gave DHs the authority to approve exceptions. The PSC therefore asked DHs to report annually on the use of this new delegated authority. 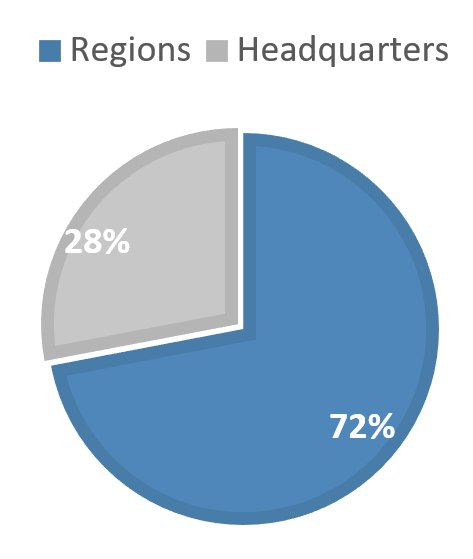 This graph indicates that 72% of the NAOS exceptions requested by the DHs come from the regions and 28% come from the headquarters. 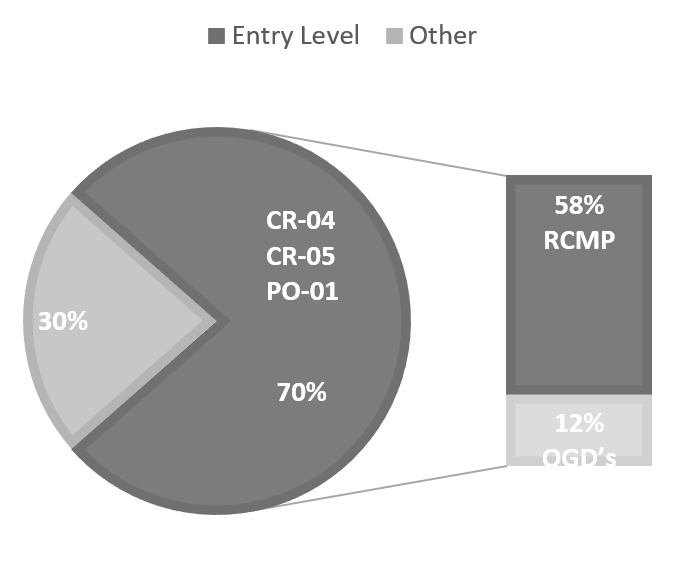 Policy Division (PD) of the PSC to continue to gather information about the appointments and the various factors contributing to the exceptions, and examine the data to provide insight and gain knowledge about other emerging issues.

Since the new ADAI came into effect, deputy heads must report to the PSC the results of any internal investigation undertaken during the fiscal year.

Fisheries and Oceans Canada and Infrastructure Canada are the only organizations that reported conducting internal investigations under subsection 15(3) of the PSEA (2 cases).

One was founded; the corrective action taken was to re-assess the candidate.

The other was unfounded but the organization decided to put a corrective measure in place by adding a requirement in the staffing checklist to review the translation of documents.

Investigations Division of the PSC to continue to partner with organizations via outreach to increase awareness and the annual liaison meeting.

Results on the use of the PSOLEAO and the PSOLAR

There are 3 situations where people may be excluded from meeting the required level of proficiency in their second official language, following non-imperative appointments. When the individual:

Submits an agreement to become bilingual;

Is eligible for an immediate annuity; or

Is excluded for medical reasons.

DHs must report on the first 2 exclusions. Since the PSC is responsible for approving exclusions for medical reasons, there is no need for organizations to report on the 3rd one.

The reporting cycle and elements on which the organizations must report remained the same as for previous years.

Exclusions that are not compliant with the PSOLEAO and PSOLAR would not respect merit in regard to official language proficiency.

The variance is due mainly to the following:

35 organizations reported managing the exclusions in compliance with the instruments.

A total of 4 cases are non-compliant, in 3 organizations (see Annex B).

2 cases where the exemption period was not extended beyond the 2-year initial period are now compliant. The 2 extensions have been approved as of April 18, 2018.

The majority of organizations manage the exclusions in accordance with the statutory instruments.

The agency’s operational context, key risks as well as mitigation strategies can be found in its Departmental Plan 2019-20.

Policy Division (PD) and Staffing Support Division (SSD) of the PSC to work in collaboration with organizations to resolve non-compliant cases.

Results on the PSC’s transition measure for SLE

Between 2012 and 2015, the PSC implemented a transition measure for alternating employees and for employees with a surplus or lay-off priority entitlement:

SLE results that were expired were deemed valid, subject to confirmation within 12 months of the alternation or priority appointment.

This measure was used 501 times.

DHs report on the use of this measure until their respective cases are resolved.

8 cases outstanding in 7 organizations to be resolved on April 1, 2018 compared to 12 cases in 10 organizations last fiscal year:

The remaining 4 cases are on extended leave and the computing of the 12-month period was suspended.

The PD and the SSD of the PSC to continue working with organizations that have outstanding and non-compliant cases until all cases are resolved.

Since the implementation of the NDS, 8% (6/76) of organisations have submitted their cyclical assessment reports. They are:

No significant trend markers can be identified at this time.

The number of appointments made from DH approved exceptions to NAOS remains low.

There is no significant change in terms of the number of internal investigations conducted by DH (15(3) of the PSEA) from the previous cycle reporting.

Similar to last year, the majority of organizations manage the exclusions for PSOLEAO in accordance with the statutory instruments.