On July 2, 2019, the Minister of Public Safety Canada announced the creation of the National Security Transparency Advisory Group (NS-TAG), a key step in implementing the National Security Transparency Commitment (the Commitment). This advisory group on national security transparency will advise the Deputy Minister of Public Safety Canada and other Government officials on the implementation of the Commitment across the Government of Canada's national security and intelligence departments and agencies.

To advise the Deputy Minister of Public Safety and Emergency Preparedness Canada ("Public Safety Canada") and the Government of Canada's federal departments and agencies with national security responsibilities on how to implement the Commitment.

The NS-TAG will accomplish this by advising on how to:

Details on the Group’s mandate and scope, meetings and membership are included in the NS-TAG’s Terms of Reference.

Advice to the Deputy Minister of Public Safety Canada

The NS-TAG members independently identify which national security topics are of interest and importance to Canadians, and focus their meetings and advice accordingly. The Deputy Minister of Public Safety Canada may also provide guidance and submit specific questions to the Group. To develop their advice, the NS-TAG refers to their own expertise, as well as perspectives gathered through NS-TAG meetings and engagement activities with government and non-government subject matter experts.

The advice and/or recommendations that the NS-TAG gives to the Deputy Minister of Public Safety Canada, and by extension to the national security community, is provided through written material or in-person deliberations. The format of advice may adapt to the subject matter at hand at the discretion of the NS-TAG.

The NS-TAG’s advice will be made publicly available here:

The NS-TAG will meet up to four times per year in locations across Canada to discuss the implementation of the Commitment and provide their views to the Government.

The NS-TAG's advice will be included in meeting summaries, which will be posted below.

Members are appointed by Public Safety Canada's Deputy Minister for a two-year term with the possibility of renewal.

One of the NS-TAG seats is to be held by a senior Government official from Public Safety Canada, who will sit on the group in an ex-officio capacity. This person will serve as the bridge between the Commitment's internal and external transparency efforts, and will be involved in coordinating the NS-TAG's efforts internally within government. The ex-officio government member will not speak publicly on the NS-TAG's behalf.

Members accept their appointment on a voluntary basis, and are not paid or remunerated for services rendered. NS-TAG members are entitled to reimbursement for reasonable travel, hospitality, and accommodations expenses in accordance with the Treasury Board Secretariat's Directive on Travel, Hospitality, Conference and Event Expenditures.

The current members of the NS-TAG can be found below, in alphabetical order. 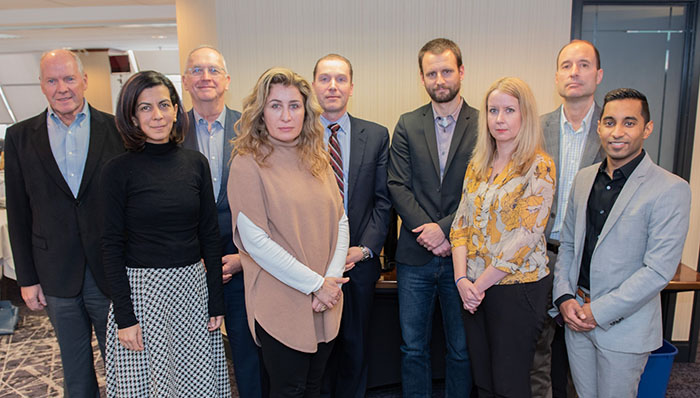 KHADIJA CAJEE
Khadija Cajee co-founded No Fly List Kids, a group of parents with children who have been falsely flagged on Canada's No Fly List, after discovering her son had been Designated High Profile on this list since birth. The group has grown to represent a movement that has risen to the national stage and impacted federal national security legislation. She has testified federally on this issue and has pushed for meaningful change to the legislation. She is the co-founder of Support Ontario Students with Type 1 Diabetes (T1D) advocating for provincial legislated standards of care for children with T1D in Ontario schools. Khadija is an entrepreneur and Partner at Servo Annex Inc., a digital advisory firm serving C-suite clients. Having grown up in apartheid South Africa, Khadija has a keen interest in social justice, human rights, and civil rights.

MARY FRANCOLI
Mary Francoli is Associate Professor of Communication and Media Studies. She is also an Associate Dean and Director of the Arthur Kroeger College of Public Affairs. She holds a doctorate in Political Science from Western University. Prior to joining the School of Journalism and Communication, she was the Leverhulme Visiting Fellow in New Media and Internet Politics at Royal Holloway, The University of London. As a leading researcher in the field of open government and open data, her research explores the relationship between digital media and issues related to politics and governance. Amongst other topics, much of her research takes a particular focus on the ways that digital media has impacted citizen engagement and mobilization, governance, and access to information and data. A frequent expert commentator on issues relating to open government and open data, she has authored two major reports for the Open Government Partnership and has provided her expert testimony to the Standing Parliamentary Committee on Government Operations.

HARPREET JHINJAR
Harpreet Jhinjar has extensive experience in community policing and public engagement. He has worked as a police officer for 10 years with the Edmonton Police Service. Harpreet is an expert in leading solution-based community initiatives on sensitive issues such as Youth Crime, Countering Violent Extremism, and Domestic Violence. With a multidisciplinary approach, Harpreet delivers meaningful solutions to these initiatives through community dialogues, stakeholder collaborations, as well as establishing linkages between communities and social agencies.  Because of his problem-solving projects on these initiatives, he has received numerous awards and recognition, including the Motorola Webber Seavey Award by the International Association of Chiefs of Police. Harpreet holds a Bachelor of Arts (Honours) in Criminology and a Master of Science in Criminology and Forensic Psychology from Middlesex University London, UK. Harpreet currently works as the Gang Prevention Coordinator with the Abbotsford Police Department.

THOMAS JUNEAU
Thomas Juneau is Associate Professor at the University of Ottawa's Graduate School of Public and International Affairs. His research focuses on the Middle East, in particular Iran and Yemen, and on Canadian foreign and defence policy and international relations theory. He is also currently conducting a number of research projects on the relationship between intelligence analysis and policy-making in Canada. He is the author of Squandered Opportunity: Neoclassical realism and Iranian foreign policy (Stanford University Press, 2015), editor of Strategic Analysis in Support of International Policy Making: Case studies in achieving analytical relevance (Rowman & Littlefield, 2017), and co-editor of Canadian Defence Policy in Theory and Practice (forthcoming) and of Iranian Foreign Policy Since 2001: Alone in the World (Routledge, 2013). He has published book chapters and articles in, among other publications, International Affairs, Political Science Quarterly, Nonproliferation Review, Orbis, International Journal, Canadian Foreign Policy, Middle East Policy, and International Studies Perspectives. From 2003 until 2014, he worked with Canada's Department of National Defence, mostly as a policy analyst covering the Middle East. He also acts as a consultant for various departments with the Canadian government and is a frequent commentator in Canadian and international media.

MYLES KIRVAN
Myles Kirvan is a graduate of both Carleton University and the University of Ottawa. He served as an advisor to Ministers of the Crown for some years after which he joined the Public Service of Canada as a lawyer with the Department of Justice. He has served as Associate Deputy Minister of Public Safety Canada and as Deputy Minister of Justice and Deputy Attorney General of Canada. Myles has served as a Director of Desjardins Sécurité Financière and as a Director and Vice-Chair of the Institute on Governance. He is a recipient of the Queen Elizabeth II Diamond Jubilee Medal and was inducted into the Common Law Honour Society of the Faculty of Law, University of Ottawa. He is a member of the Law Society of Ontario and the Canadian Bar Association. He volunteers with Salus, Ottawa and with St. Joe's Supper Table, Ottawa.

JUSTIN MOHAMMED
Justin Mohammed is the Human Rights Law and Policy Campaigner at Amnesty International Canada (English section). He is a graduate of the University of Ottawa's Faculty of Law, as well as Carleton University's Norman Paterson School of International Affairs and Arthur Kroeger College of Public Affairs. Prior to his current role, Justin clerked at the Federal Court of Canada and served as a Human Rights Officer with the United Nations Multidimensional Integrated Stabilization Mission in Mali (MINUSMA). He is a member of the Law Society of Ontario and sits on the Board of Directors of the Canadian Council on International Law.

BESSMA MOMANI
Dr. Bessma Momani is Professor of Political Science at the University of Waterloo and a Senior fellow at the Centre for International Governance and Innovation (CIGI). She was a Non-Resident Senior Fellow at both the Brookings Institution and Stimson Center in Washington, D.C., a consultant to the International Monetary Fund, and formerly a visiting scholar at Georgetown University's Mortara Center. She was a 2015 Fellow of the Pierre Elliott Trudeau Foundation and now sits on its board of directors. She is also a Fulbright Scholar. She has authored and co-edited ten books and over 80 scholarly, peer reviewed journal articles and book chapters that have examined international affairs, diversity and inclusion, Middle East affairs, and the global economy. She is recipient of a number of research grants from the Social Sciences and Humanities Research Council (SSHRC), International Development Research Council, and the Department of National Defence. Dr. Momani is a regular contributor to national and international media on global security and economic policy issues. She has written editorials for the New York Times, The Economist, The Globe and Mail, The Toronto Star, Newsweek, and Time Magazine.

DOMINIC ROCHON
Dominic Rochon is Senior Assistant Deputy Minister, National and Cyber Security Branch at Public Safety Canada. He comes to Public Safety from TBS where he was Assistant Deputy Minister, People Management Systems and Processes for the past year. His responsibilities included Phoenix stabilization, leading in shaping a Next Generation HR and Pay solution, and contributing to the transformation of business solutions. Prior to this role, Dominic was Deputy Chief, Policy and Communications with the Communications Security Establishment (CSE), where he was responsible for the organization’s Strategic Policy, Strategic Planning, Strategic Communications and Communications Services, as well as the Disclosure, Policy and Review groups. Specifically, Dominic led CSE's efforts in Business Planning, Reporting, Operational Policy, Legal Disclosure, Access to Information and Privacy, Cabinet and Parliamentary Affairs, domestic and international Strategic Policy, Internal and External Communications, Creative Services and Linguistic Services. Dominic also held two other previous positions at CSE: Director General, Policy and Communications, and Director, Operational Coordination where he led CSE's 24/7 operations center. Dominic came to CSE from the Privy Council Office (PCO) where he served as Acting Director of Operations in the Security and Intelligence Secretariat. Prior to his three years in PCO, Dominic spent four years in TBS's International Affairs, Security and Justice Program Sector, where he left as Acting Director of the Security and Justice Division in 2007. Dominic received his Bachelor's Degree in Political Science with Honours in International Politics from the University of Ottawa. He is married with two children.

JEFFREY ROY
Jeffrey Roy is Professor in the School of Public Administration at Dalhousie University's Faculty of Management. He is a widely published observer, critic and teacher in the realm of digital technologies and their widening impacts on government, democracy, industry and society. Dr. Roy has worked with the OECD, the United Nations, multinational corporations, and all levels of government in Canada. He has produced more than eighty peer-reviewed articles and chapters and his most recent book was published in 2013 by Springer: From Machinery to Mobility: Government and Democracy in a Participative Age. Professor Roy is a member of the Editorial Board of Canadian Public Administration, the scholarly journal of the Institute of Public Administration of Canada, and he is also a featured columnist in Canadian Government Executive, a leading national publication devoted to public sector governance and public policy challenges. Among other bodies, his research has been funded by the Social Sciences and Humanities Research Council of Canada and the IBM Center for the Business of Government.