The Reporting Cycle for Government Expenditures

The reporting cycle for government expenditures establishes events leading up to the tabling of various documents and processes related to the government’s Budget and expenditure plans.

The primary documents are:

These documents provide parliamentarians with financial and non-financial information to review and make decisions on the use of public funds by the government. 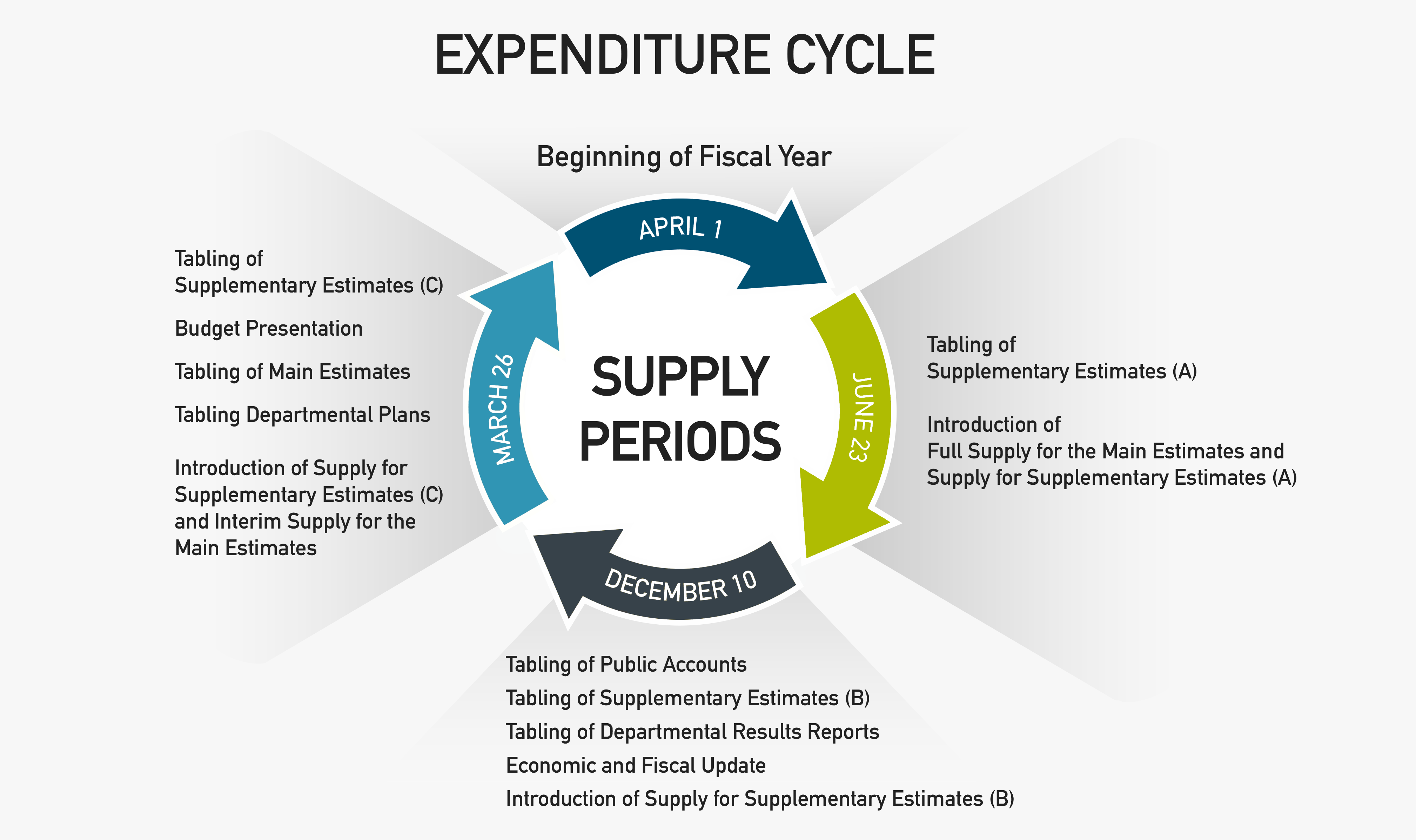 The fiscal year of the Government of Canada runs from April 1 to March 31. Each fiscal year is divided into three parliamentary supply periods. Supply is the process by which the government asks Parliament to appropriate funds in support of approved programs and services. Supply periods are designated as follows:

The reporting cycle starts with the presentation of the Budget by the Minister of Finance and the tabling of the Main Estimates by the President of the Treasury Board, followed by the associated interim supply bill to request initial funding to cover the first three months of the new fiscal year.

Under the Standing Orders of the House of Commons, the Main Estimates must be tabled on or before March 1. The Budget is generally presented in the January to March timeframe; although there is no legal requirement to do so. The Interim Supply Bill is to be approved by Parliament prior to the start of the new fiscal year on April 1. This ensures that the necessary expenditure authority to move government priorities forward is in place for the coming year. Changes and updates to planned spending are presented in the Supplementary Estimates, which are identified in an alphabetical sequence (A, B, C, etc.).

In the second supply period, the Public Accounts of Canada for the previous fiscal year is tabled by the President of the Treasury Board. This document reflects the Government of Canada’s audited financial statements and other detailed financial information for the recently completed fiscal year. These are prepared jointly by the Receiver General for Canada (Public Works and Government Services Canada), the Treasury Board Secretariat and the Department of Finance Canada.

Supplementary Estimates (B) documents usually follow and are tabled in late October or early November. The related supply bill is introduced in the House of Commons and voted on in December.

In addition, the Economic Fiscal Update is prepared during this period by the Department of Finance. It provides an update to information outlined in the Budget, presented by the Minister of Finance.

Also during this third period, and in preparation for the next fiscal year, the Main Estimates must be tabled on or before March 1. Normally they are tabled in late February. Because they are tabled so close to the government’s annual Budget (prepared by the Minister of Finance), it is not always possible to include detailed budget-related plans and priorities in the Main Estimates document. Once departments, agencies and Crown corporations are able to provide the necessary level of detail for budget-related requirements, these and other adjustments to the spending plans are presented in subsequent Supplementary Estimates documents.

The last Estimates document to be tabled each year is the Departmental Plans. This is a forward-looking document that each department and agency (excluding Crown corporations) must prepare. It outlines an organization’s key plans and priorities for the coming fiscal year and the two following years. Departmental Plans documents must be tabled in Parliament on or before March 31 of each year.

Supplying the necessary documentation on government expenditures on a cyclical basis helps parliamentarians better understand how taxpayer money is being spent. It also ensures that their decisions are based on relevant and updated information.