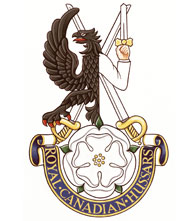 NON NOBIS SED PATRIAE
“Not for ourselves but for our country”

The Royal Canadian Hussars (Montreal) or the RCH is a Reserve armoured reconnaissance regiment belonging to the 34 Brigade Group of Canada. The RCH’s mission is to support the Regular Force in executing its peacetime duties, including periodic operational deployments, peacekeeping operations and civil government support operations.

The official history of the Royal Canadian Hussars (Montreal) can be found at the Directorate of History and Heritage website.