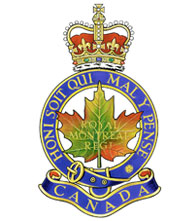 The Royal Montreal Regiment (RMR) is a Reserve unit belonging to the 34 Canadian Brigade Group. It was formed in 1914 in order to fight in World War I. Typical of Canada’s sacrifice in the horrors of the War, 75% of those who served in the RMR became a casualty, and 1,192 RMR soldiers died in the mud of France and Flanders. The Regiment also fought in WW2 and has served in virtually every theatre of operation that Canada has participated in ever since.

The RMR continues to be active in theatres of operation around the world, including Canada, playing a vital role in defending Canadian interests and making a positive contribution to the local community. The RMR is made up of ordinary Canadians who do extraordinary things.

The official history of The Royal Montreal Regiment can be found at the Directorate of History and Heritage website.