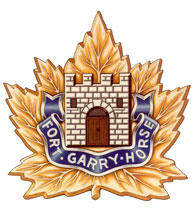 The Fort Garry Horse is an Armoured Reconnaissance Regiment in Canada’s Army Reserves. From its home at McGregor Armoury in Winnipeg, the soldiers train as drivers, observers, gunners, and commanders of reconnaissance vehicles.

The Fort Garry Horse has deployed personnel across Canada in domestic operations fighting fires and floods, but have also deployed internationally to serve in places like Afghanistan and the Balkans.

The Fort Garry Horse originated in Winnipeg, Manitoba on 15 April 1912, when the 34th Regiment of Cavalry was authorized to be formed. In October 1958, a new Regular regiment of the Fort Garry Horse was formed at Camp Petawawa, Ontario. Equipped with the Centurion tank, the regiment served in Germany from 1962 to 1965. The regiment then moved to Calgary where it remained until it was deactivated in 1970.The Militia Regiment gave up its Shermans in 1969 and has served as a reconnaissance regiment ever since, using vehicles such as the M38 jeep, the Iltis and the G-Wagon.