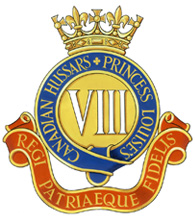 The 8th Canadian Hussars (Princess Louise’s) is a Primary Reserve unit with a long and distinguished history. The regiment was formed in 1848 in the Sussex area and was originally known as Saunders Horse. The 8th Canadian Hussars is Canada’s oldest continually serving Calvary regiment in Canada. The regiment was rerolled to an armoured unit during the second world war. When wars came, hundreds of Hussars joined the active service army and served with distinction on battlefields in France and Flanders in World War 1, and in Italy and Holland in World War II, They also served later in Europe under NATO in the Middle and Far East and in Cyprus as peace keepers for the United Nations.

Today, The 8th Canadian Hussars are again militia soldiers, continuing to supply men and women to support regular army in places like Afghanistan where Canada has committed its forces.

The earliest beginnings of the 8th Canadian Hussars (Princess Louise's) have traditionally been traced to the year 1775 in the Colony of Virginia where Captain John Saunders, of Princess Anne County, raised a troop of cavalry at his own expense to fight for the Crown against the Colonial rebels. This unusual Regiment included riflemen, grenadiers, artillery and cavalry, and it never knew defeat during the American conflict for independence. In September 1783, the Regiment as an entity sailed for Nova Scotia and reached Saint John on 27 September 1783. A large number of these Loyalists soldiers settled in the Saint John and Kennebecasis valleys by Loyalist soldiers, had a military tradition and indeed an effective militia.

In 1839, the York County Troop, known for a time as the York Light Dragoons, was mobilized for service in the Aroostook War, a conflict with American lumbermen that never quite came to open fighting. For four months they patrolled the border and roads between Woodstock, Fredericton and Saint John.

By 1848, eleven troops of cavalry were in existence. By authority of Militia General Order No 1 of 4 April 1848, these eleven independent troops were united to form a Regiment entitled the New Brunswick Yeomanry Cavalry. It is this date that is officially recognized as the formation date of the 8th Canadian Hussars.