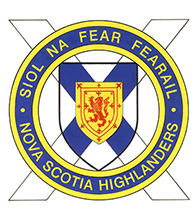 The mission task for our unit is: Direct Fire Support – A platoon of 39 members, which is trained in the employment of various infantry heavy weapon systems to provide tactical direct fire support to a manoeuvring battle group.

The Nova Scotia Highlanders (NS Highrs) is a Primary Army Reserve Unit located in Northern Nova Scotia whose task is to train skilled soldiers to contribute to the success of military operations at home and abroad.

Based in Truro, Nova Scotia, and with Companies located in both Springhill and Pictou, The Nova Scotia Highlanders is a light infantry unit of the Canadian Armed Forces Reserve. The Regiment traces its history to 1871, and has carried on the tradition of citizen-soldiering through two World Wars and numerous expeditionary and domestic operations, most recently CAF operations in Afghanistan. Today, the Highlanders are a well-equipped and well-trained component of the Reserve Force, contributing to the light infantry capability of the Canadian Armed Forces.

In 1936 a further reorganization noted an amalgamation of the Cumberland Highlanders and the Colchester and Hants Regiments plus one company of the Machine Gun Battalion of Truro, NS. This new unit was named the North Nova Scotia Highlanders (MG) and became part of the 18th Highland Brigade. This brigade also included the Pictou Highlanders, the Cape Breton Highlanders and the Prince Edward Island Highlanders. In 1939 the unit was mobilized and was reorganized to include a company from each of the Battalions of the 18th Highland Brigade. In July 1941, the unit proceeded overseas as part of the 3rd Canadian Infantry Division. The role of the unit during World War II can best be summarized by mentioning such names as Caen and Nijmegen.

At present, 1st Battalion, The Nova Scotia Highlanders (North) is one of four infantry battalions which form the combat power of 36 Canadian Brigade Group. The Battalion’s main task at present is to prepare combat capable forces to provide augmentation of deployed regular force units. A secondary task assigned to the unit is to ensure that the unit is capable of responding to local emergencies.