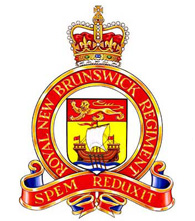 The mission task for our unit is: Mortars – A platoon of 50 members, which is trained in the employment of two groups of four 81-millimetre mortar tubes to provide tactical medium mortar indirect fire support to a manoeuvring battle group.

Early History -The regiment was formed in the year 1787 to assist the regular Imperial troops with the defence of New Brunswick, a role which it fulfilled well. During the War of 1812 many Militia men enlisted in Fencible Regiments or Regiments of the Line -- the better to serve their King. By the year 1834, the Militia of Carleton and York Counties was comprised of five battalions; one each at Wicklow, Woodstock, Kingsclear, Douglas and Fredericton.

The regiment today still preserves the ideals of the colonial citizen-soldier and is the product of over 200 years of re-organizations, re-designations, three wars, alarums, hard work, bravery and loyalty. It is the focus of the affections of all those that served in it, it is a repository of tradition, and is a living memorial to those of its members who died for higher ideals in wars throughout the world. The regiment is a huge extended family of those who serve, those who have served and those who wish it well.