The State of Youth Report creates greater awareness of how youth are doing and highlights the opportunities and challenges they face, in their own words. This report will help inform government policies, programs, and decisions to better support youth in Canada. A State of Youth Report will be released every 4 years, as committed in the Youth Policy. Each time, it will be developed in close collaboration with youth.

Canada’s First State of Youth Report: For youth, with youth, by youth

For youth, with youth, by youth

The State of Youth Report presents the perspective of youth in Canada in their own words. Learn how the principle of “for youth, with youth, by youth” was applied to ensure that the voices of young people are heard, honoured and reflected in an authentic way. 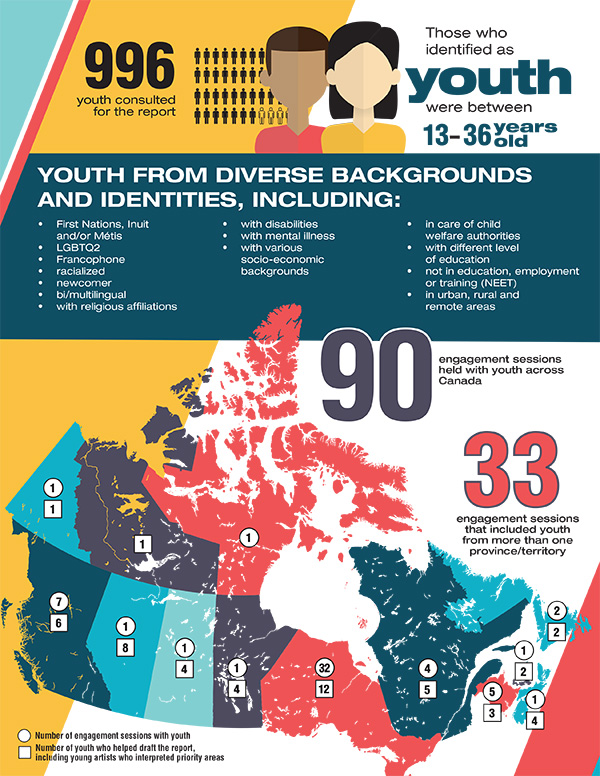 A Youth Advisory Group was convened to write “The State of Youth in 2021 - In Their Own Words” section of the Report. The group worked together to give voice to the many youth engaged throughout the process, and leveraged the opportunity to make a number of recommendations.

The group was composed of 13 young people from different backgrounds, genders, ethnicities, ages, and stages in life. The members analyzed and interpreted the data gathered during the engagement sessions to ensure that the perspectives of young people are heard and honoured, and gave advice on the format and presentation of the Report to ensure it is accessible and speaks to all youth in Canada. In addition to drafting the main sections of the Report, this group provided advice on how the Government of Canada can continue its dialogue with youth.

Six young artists have put their talent to work to create a visual interpretation for each of the youth-identified priority areas and the impacts of COVID-19. Their illustrations complement and punctuate the words shared in the report.