The Department of National Defence will take a comprehensive approach to ensure that DND/CAF can transition quantum technologies into military capabilities. This will include anticipating and evaluating the military implications of quantum technologies, defining defence focus areas for quantum science, technology, and innovation, and establishing the conditions that accelerate the fielding of quantum-based technologies. Defence mission success will also depend on understanding and exploiting vulnerabilities introduced by quantum technologies, as well as safeguarding quantum investments by ensuring potential adversaries do not acquire the research, intellectual property (IP) or technologies funded by DND/CAF under the Strategy. To succeed, the strategy will be focused on three pillars to ensure that DND keeps abreast of the state of the art in quantum research development and is able to efficiently transition these technologies as they mature:

Successful implementation of this strategy is dependent on each of the key enabling activities discussed under each pillar.

The conditions under which DND/CAF operate define unique requirements and specifications for technologies to be fieldable. DND/CAF must ensure that quantum capabilities can operate reliably under all defence and security environmental conditions including denial, deception and subjection to countermeasures. Early engagement by DND/CAF to communicate defence-specific gaps and requirements to the quantum community will help define the path quantum S&T will follow to a build toward fieldable defence capabilities.

Sensing capabilities are a critical enabler of situational awareness and decision support. Canada has existing strength in quantum sensing S&T but the next generation of quantum-based sensors will not develop towards timely, operationally fieldable capabilities without DND/CAF influence and guidance. Resilient quantum sensors that are required to operate in harsh conditions and/or environments, at high speeds, and in a stealthy manner must start down that development path early. To ensure operational requirements are met, DND/CAF will engage with the Canadian quantum community, including those in government, in advancing quantum sensors towards integration into current DND research endeavors and eventual CAF application. The integration of quantum-based sensors into Defence capabilities will ensure that DND/CAF are not at a technological disadvantage when preparing for and conducting missions.

Action No. 1: Focus initial efforts on quantum sensing applications to take advantage of Canada’s strong foundation in the field and establish world-leading expertise and capabilities in quantum sensing.

Quantum technologies that lack resilience cannot be fully integrated into DND/CAF operations; a robust understanding of quantum-enabled technology capabilities and vulnerabilities is required. DND must drive assurance-related S&T, including denial and deception as countermeasures for quantum technologies deployed against us. These aspects of technology are a defence and security-specific interest—one which will not be addressed without DND/CAF leadership and focus. Assessments of current quantum technology vulnerability and exploitation will feed into operational analysis and be addressed in DND integrated S&T program decisions.

Action No. 2: Conduct assessments of new threats and vulnerabilities that may be introduced by quantum technologies as they come online.

1.3 Accelerate the fielding of quantum capabilities

Quantum S&T is required across the whole spectrum, from fundamental research to applied engineering, in order to develop the next set of transformative technologies. DND is positioned to provide sandboxes and exploit S&T field trials to enable experimentation in realistic environments in order to increase the technology readiness levels of quantum technologies. Joint projects, experiments, and trials with international allies will be leveraged to achieve this aim, allowing DND/CAF to be prepared to exploit quantum technologies in a timely fashion.

Action No. 3: Place a strategic emphasis on enabling and incentivizing the transition of quantum technologies out of the laboratory into fieldable prototypes.

Partnerships are key to accelerating the adaptation of quantum technologies. The field is broad and deep, spanning a large range of highly technical skill sets. Different nations have different strengths, based on decades of past investment decisions. Additionally, a peculiarity of quantum technologies is that it is not uncommon for a promising approach to be overtaken unexpectedly by another, meaning it is advantageous to work on as many techniques as possible to “cover the bases”. For quantum computing, large multinationals as well as small and medium-sized enterprises are investing heavily in different approaches, few of which may be the eventual winners. The risk of “betting on the wrong horse” is high, though the training of highly qualified personnel (HQP), even if the technology is not successful, is not to be undervalued and is worthy of investment. Mitigation can be achieved by strategically partnering with other players in the field over a range of technologies to distribute risk and share successes. These broad partnerships will help DND strengthen its own expertise while pursuing complimentary S&T objectives.

The NRC is recognized amongst the world leaders in quantum S&T and is the Canadian government lead in coordinating and advising on quantum technologies. To begin, DND will form a strategic partnership with the NRC and will benefit through leveraging their world-class expertise, facilities, and formidable academic and industrial networks. Through collaboration with NRC, DND will remain continuously informed on the state o -the art and readiness levels of quantum technologies while simultaneously developing HQP within DND and connecting to the broader Canadian and global quantum community. This will in turn enable DND to continuously assess the defence and security implications of quantum technologies in order to inform and steer the implementation of DND quantum capabilities, programs, and policies. Reciprocally, NRC will benefit from access to pressing defence and security problems, allowing them to position their research programs appropriately to address priority Canadian and allied defence and security needs.

Through this partnership, the NRC’s Industrial Research Assistance Program (IRAP) allows for a particularly valuable function. IRAP has a considerable business intelligence unit and can play a significant role by connecting defence industry and government, identifying and accelerating innovative and marketable defence R&D projects focused on filling defence and security gaps, and facilitating quantum technology transfer.

DND will also work with other government departments through the existing Quantum Science and Technology Assistant Deputy Minister (ADM) Coordination Committee. The objective of the ADM committee is to strengthen federal government efforts by coordinating and leveraging federal government expertise into collaborative projects and partnerships for the benefit of multiple organizations. For example, the partnership between DND and Public Safety Canada through Defence Research and Development Canada (DRDC), the Centre for Security Science (CSS) and the Canadian Safety and Security Program (CSSP), can be leveraged in cases where quantum technologies can be developed for Defence, Security, and Public Safety purposes. Another example is quantum computing, including quantum-resistant cryptographic algorithms, which will be monitored through DND’s partnership with the Communications Security Establishment (CSE). 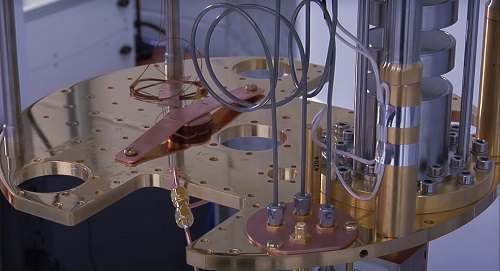 Action No. 4: Establish a strong strategic partnership with the National Research Council. Embed defence scientists at NRC; leverage their world-class expertise and networks to support the development and delivery of projects.

DND will work closely with federal departments, academia, and industry to advance Canadian quantum technologies in areas of national interest. In addition to investments through DND’s existing S&T programs, DND will engage the quantum innovation system through mechanisms such as the Innovation for Defence Excellence and Security (IDEaS) program and the CSSP in order to help stimulate the growth and transition of promising work and foster the emerging Canadian quantum industry. Such programs will be utilized to test quantum technologies in challenges framed around defence and security problems, thus situating DND as a mainstay in the Canadian quantum landscape. Additionally, DND will play a key role in the development of a national quantum strategy in order to contribute to a focused national investment in Canadian quantum technologies for defence. Doing so will support Canada’s defence and economic security through the development and sustainment of a sovereign industrial capability.

Action No. 5: Position DND to drive innovation in quantum S&T for defence capabilities through national collaboration and partnership with the Department of Innovation, Science, and Economic Development Canada (ISED) for investment in quantum science, technology, and innovation.

The Department of National Defence has already begun investing in quantum technologies through the internal integrated S&T program. Continuing Defence investment must align with Canada’s defence policy, Strong, Secure, Engaged [7] and target areas requiring stimulus to move towards Defence capabilities. Investment should follow an informed quantum technologies roadmap and engage the quantum innovation ecosystem through challenges that align with Defence S&T priorities. This investment should include safeguards to protect the research, IP and technologies that result, in alignment with the open science guidelines outlined by the Government of Canada.

DND will build and maintain a core team of highly qualified personnel with thorough knowledge of quantum technologies and the Canadian defence and security context. An extended team will include defence science subject matter experts (SMEs) who are delivering on current Defence S&T programs, and will have the critical mass to be literate across all areas of quantum technologies, how they relate to Defence needs, and how they may best be exploited.

To best anticipate, adapt, and act in a rapidly changing quantum technology and application space, DND requires up-to-date science advice to be communicated and integrated into Defence capability planning. DND will identify, monitor, and evaluate the impact of emerging quantum technologies on existing defence systems and approaches (defensive, offensive, countermeasures and enablers) and integrate this analysis to inform on both the defence opportunities presented and the threat landscape. DND will also capitalize on partner organization technology road mapping and foresight and leverage analysis from extramural national and allied Defence S&T organizations to further DND/CAF understanding and exploitation of relevant emerging quantum technologies.

Action No. 7: Strengthen DND/CAF’s internal quantum S&T capacity to assess the relevance and impact of quantum technologies in a defence and security context; advise on quantum science, technology, and innovation investments, including recommending areas that require augmented internal capacity to integrate them, and enable DND to contribute to and leverage allied efforts.