Chapter One: The Canadian Military Prosecution Service: Ordo per Justitia

Duties and Functions of the DMP

The Director of Military Prosecutions (DMP) is the senior military prosecutor in the Canadian Armed Forces (CAF). He is appointed by the Minister of National Defence (MND) for a fixed term pursuant to subsection 165.1(1) of the National Defence Act (NDA).Footnote 1  Under the NDA, the DMP is responsible to prefer all charges to be tried by court martial and for the conduct of all prosecutions at courts martial. The DMP acts as counsel to the MND, when instructed, in respect of appeals to the Court Martial Appeal Court (CMAC) and the Supreme Court of Canada (SCC). The DMP is also responsible to provide advice in support of investigations conducted by the Canadian Forces National Investigation Service (CFNIS), which is the investigative arm of the Canadian Forces Military Police. The DMP represents the CAF at custody review hearings before military judges and the CMAC.

“ORDO PER JUSTITIA” or “DISCIPLINE THROUGH JUSTICE”. The DMP is a key player in the Canadian military justice system helping to promote respect for the law, as well as discipline, good order, high morale, esprit de corps, group cohesion and operational efficiency and capability. 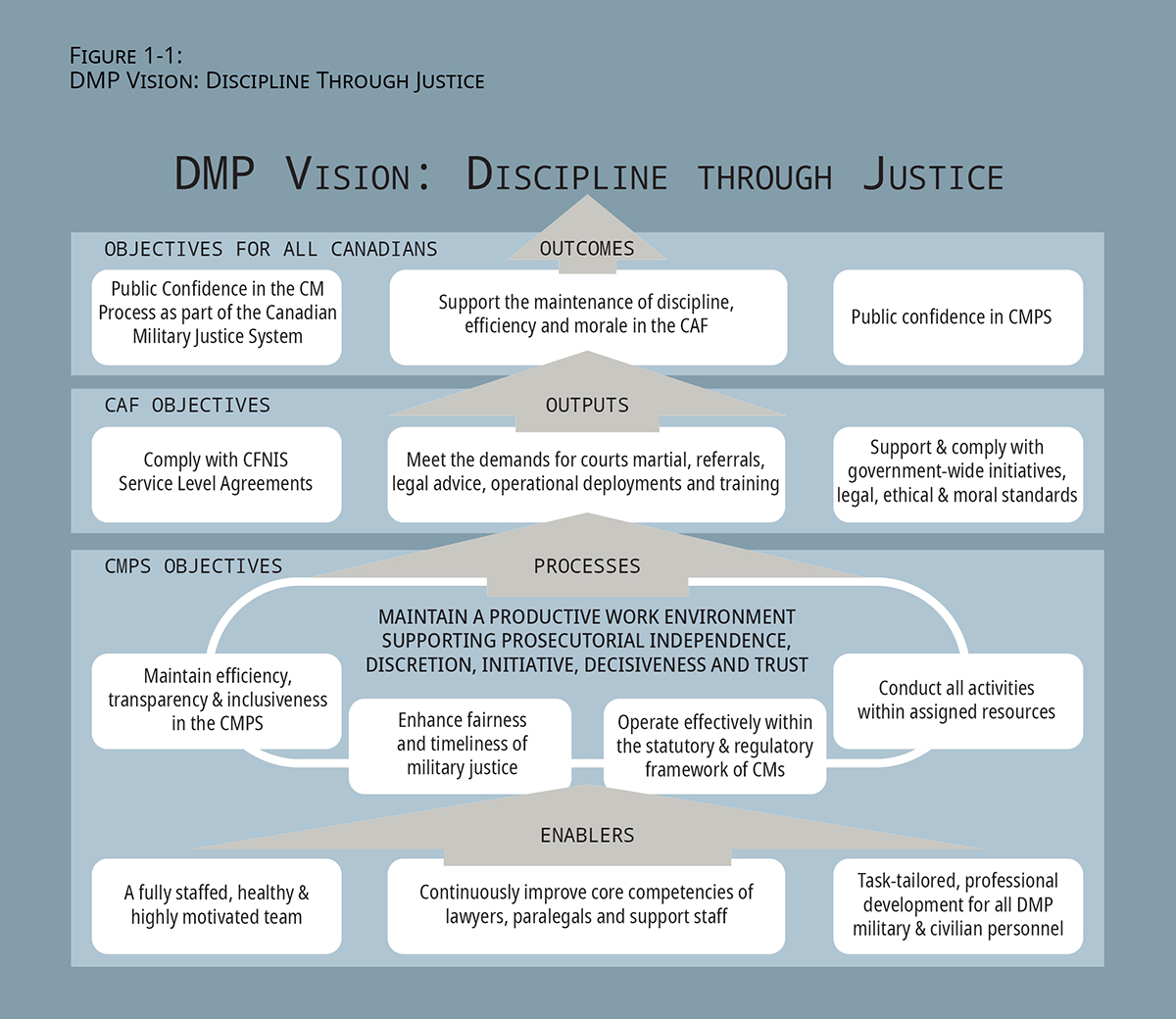 In accordance with section 165.15 of the NDA, the DMP may be assisted and represented, to the extent determined by the DMP, by officers who are barristers or advocates with standing at the bar of a province. In this regard the DMP is assisted by a number of Regular and Reserve Force legal officers appointed to act as military prosecutors, along with a civilian paralegal and support staff. This organization, known as the Canadian Military Prosecution Service (CMPS) is headquartered in Ottawa and comprised of several Regional Military Prosecutor (RMP) offices located across Canada.

The ADMP is responsible to assist the DMP in the day-to-day management of the CMPS. In addition, the ADMP supervises the Appellate Counsel, the Senior Counsel – Policy & Training, and the CFNIS Legal Advisor.

The Appellate Counsel prepares and files written materials and appears as counsel on behalf of the MND for all matters at the CMAC and the SCC.Footnote 3

The Senior Counsel – Policy & Training is a senior military prosecutor who provides advice and support to the DMP on all policy-related matters. They also assist in the coordination of all training opportunities for members of the CMPS, including the organization of an annual Continuing Legal Education workshop.

Regional offices are located in Halifax, Valcartier, Ottawa, Edmonton and Esquimalt. Each office is comprised of two RMPs and one civilian administrative support staff with the exception of the Esquimalt Office, which only has one RMP. RMPs are responsible for the conduct of courts martial, for representing the CAF at custody review hearings, and for the provision of legal advice and training to their respective CFNIS Detachments.

The DDMP for the Sexual Misconduct Action Response Team (SMART) is primarily responsible for mentoring prosecutors in the performance of their duties related to serious sexual misconduct prosecutions. The DDMP SMART is an experienced Reserve Force prosecutor who holds the rank of Lieutenant-Colonel (LCol).

The CMPS relies on eight experienced civilian prosecutors who are members of the Reserve Force. These members consist of a DDMP Reserves, at the rank of LCol, who is responsible for the overall supervision and management of Reserve Force prosecutors, the DDMP SMART, and six prosecutors who assist their Regular Force counterparts in the prosecution of cases at courts martial. 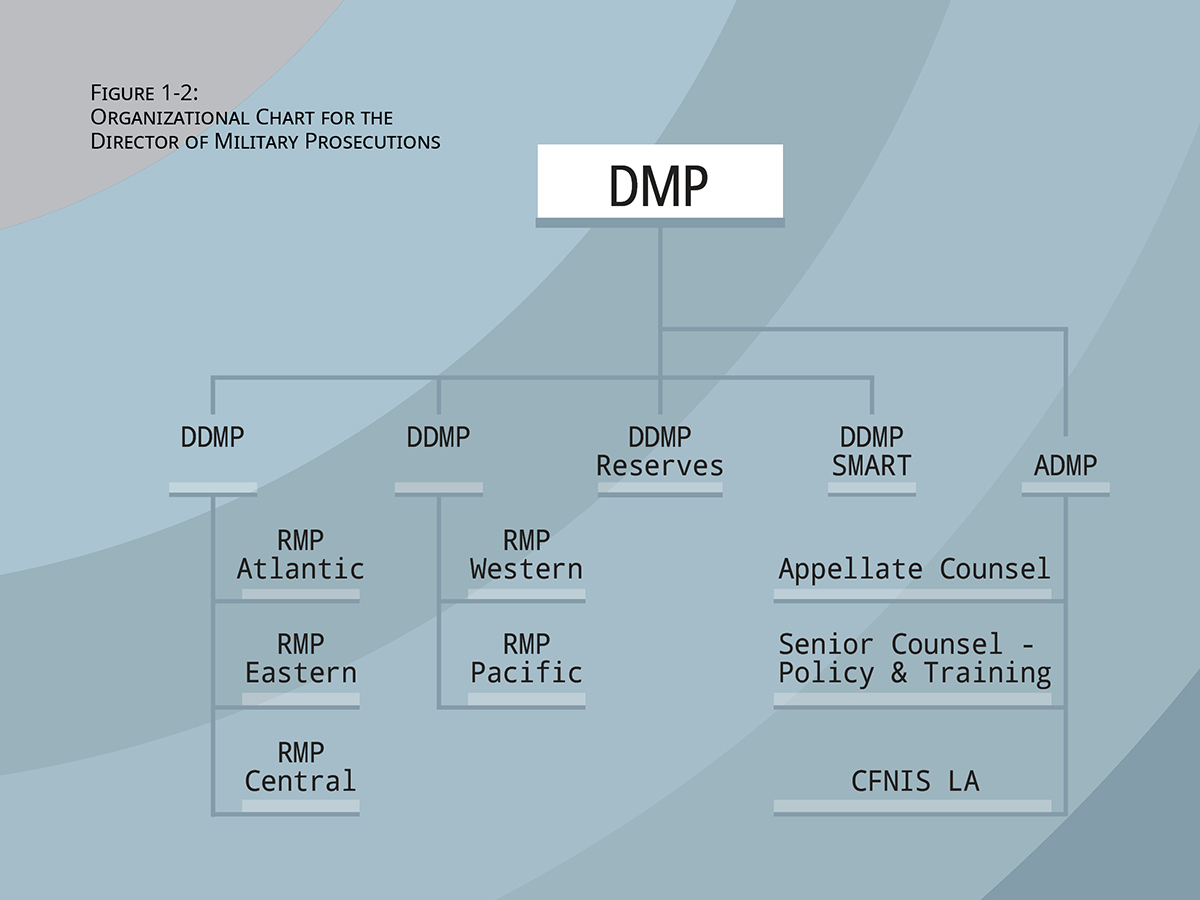 JAG Instruction Regarding Postings of Regular Force members at the CMPS

Recognizing the needs and challenges associated with developing experienced military prosecutors, the JAG issued an instruction to ensure that Regular Force members can remain with the CMPS for a minimum of five years before being considered for a posting. Before this instruction, Regular Force members of the Office of the JAG (OJAG) would normally be considered for a posting outside of the CMPS within three years. This instruction has helped the CMPS in building a pool of experienced RMPs, the benefits of which are beginning to be realized. This reporting period, the JAG renewed her commitment to the five-year minimum posting approach.

During this reporting period, one civilian assistant Crown attorney from Nova Scotia enrolled in the CAF and joined the CMPS as a Reserve Force prosecutor. One position remains vacant and is expected to be staffed in the next fiscal year.

The CMPS Paralegal position was filled in an acting capacity by another civilian member from the OJAG for a period of four months during the reporting period. In September 2019, a new paralegal was hired into the position.

Additionally, in September 2019, the civilian member who occupied the position of Office Manager/Administrative Assistant for the Pacific Region office took a year of leave without pay to pursue an employment opportunity with the provincial government. In the meantime, the position is being filled on a part time basis by a former member of the CAF.

The need to continue to develop legal skills and keep abreast of key developments in the law is important for any lawyer but is critical for all prosecutors. The state of criminal law remains in constant evolution through judicial decisions at the trial and appellate levels, as well as through changes to the Criminal Code and the NDA.

The CMPS was scheduled to hold its annual Continuing Legal Education (CLE) workshop at the end of March 2020 for its Regular Force and Reserve Force military prosecutors. Unfortunately, on 12 March 2020, in response to the coronavirus pandemic (COVID-19) and in accordance with CAF directives, the JAG placed a restriction on all temporary duty travel of its members for a period of a least 30 days. This led to the cancellation of the JAG CLE workshop. Similarly, the CMPS postponed its portion of the CLE workshop until the next reporting period.

On 24 and 25 April 2019, the CMPS held a civilian administrative assistant training workshop, which focused on topics such as file management, finance, and training on the functionality of the electronic Case Management System.

During the last reporting year, the CMPS entered into a partnership with the Directeur des poursuites criminelles et pénales (DPCP) for the temporary employment of an RMP as a Crown prosecutor with the province of Quebec.

One RMP from the Eastern region was seconded to the Quebec City DPCP’s Office for a few months. During that time, the RMP acted as second chair for several trials involving sexual violence offences held at the Cour du Québec and the Cour supérieure du Québec. The RMP also followed two in-house courses regarding interaction with media and warrants. Finally, the RMP assisted Crown prosecutors in the conduct of military matters that had been referred to the civilian justice system following the decision of the CMAC in the matter of R v Beaudry.Footnote 4  These exchanges are invaluable in fostering relationships with other Canadian prosecution services, developing well-rounded advocates, and providing an opportunity to capture lessons learned that help further advance our practices and policies.

During the reporting period, RMPs participated in continuing legal education programs delivered by a number of organizations including the Federation of Law Societies of Canada, the Public Prosecution Service of Canada, the Ontario Crown Attorneys’ Association, le Barreau du Québec, the Osgoode Professional Development, the Professional Development Institute, the Canada School of Public Service and the Alberta Crown Prosecution Service. These programs benefited the CAF not only through the knowledge imparted and skills developed but also through the professional bonds developed by individual RMPs with their colleagues from the provincial and federal prosecution services.

For a complete breakdown of training opportunities provided by external organization, please refer to Table 1-3.

The CMPS also provides support to the training activities of the OJAG and other CAF entities. During the reporting period, this support included the mentoring and supervision by RMPs of a number of junior legal officers from the OJAG who completed a portion of their “On the job training” program by assisting at courts martial. The CMPS also provided support to military justice briefings given to JAG legal officers and military justice briefings offered by the Regional Services division of the OJAG to other members of the CAF.

Legal officers serving outside the CMPS may also, with the approval of their supervisor and the DMP, participate in courts martial as “second chair” prosecutors. The objective of this program is “to contribute to the professional development of unit legal advisors as well as to improve the quality of prosecutions through greater local situational awareness”.Footnote 5

The portability of the court martial system means that courts martial can occur anywhere in Canada or around the world. Unlike their civilian counterparts, RMPs are called upon to travel away from their home for significant periods of time to conduct courts martial and appeals, or to attend training events. Travel away from home – referred to as temporary duty (TD) – has a significant impact on the well-being of CMPS personnel and their families. This year, members of the CMPS were on TD for a total of 806 days. This is an increase of 102 days in comparison to the last reporting period (from 704 to 806). The increase in total number of TD days for this reporting period is mostly due to an increase in court martial-related TD days in comparison to the last reporting period (from 375 to 448).

Table 1-4 shows the breakdown of temporary duty for CMPS personnel by region for this reporting period.

The DDMP for the Central, Atlantic, and Eastern regions also supervises prosecutions which occur outside of Canada.

Depending on the caseload for appeal files, it is common for other officers within the CMPS to also appear as counsel or co-counsel at the CMAC and at the SCC.

Footnote 5
The DMP and the Deputy Judge Advocate General Regional Services have an agreement whereby unit legal advisors may participate as second chairs to RMPs in preparation for and conduct of courts martial. Please see DMP Policy Directive #: 009/00 ( http://www.forces.gc.ca/en/about-policies-standards-legal/comms-with-legal-advisors.page) for further information.

The total number of TD days for this reporting period does not account for TD days spent by four Regular Force prosecutors and one Reserve Force prosecutor while following the Legal Officer Qualification Course (LOQC). The LOQC, which was held from 24 April to 24 May 2019 in Canadian Force Base Kingston, is a necessary training requirement for all legal officers in order to become occupationally qualified and provide legal services as members of the OJAG.