Notice: Refer to the Table of contents to navigate through the EI Monitoring and Assessment Report 2012.

In addition to assisting those who are unemployed, EI plays an important role in supporting employees and self-employed individuals (including fishers) who are too sick to work, who stay at home with a newborn or newly adopted child, or who take a temporary leave from work to provide care or support to a gravely ill family member. For a detailed qualitative overview of EI special benefits, please see Chapter 1 of the 2011 EI Monitoring and Assessment Report.

As of January 31, 2010, EI special benefits, including maternity, parental, sickness and compassionate care benefits, were extended to self-employed people, who could opt into the EI program for the first time. Benefits were payable as of January 1, 2011.

On December 14, 2012, the Helping Families in Need Act received Royal Assent, creating a new type of EI benefit for parents of critically ill children (PCIC). Under the PCIC benefits, up to 35 weeks of EI benefits will be available, to be shared among eligible parents who leave work to provide care or support to one or more critically ill children under the age of 18. This benefit will be available to eligible EI contributors and to eligible self-employed individuals who have contributed to EI. The EI PCIC benefits are expected to be available in June 2013.

Access to the new PCIC benefits will be consistent with the existing eligibility requirements for EI special benefits, requiring 600 insurable hours during the qualifying period. Footnote 89 In addition, to qualify for the PCIC benefits, a claimant will need to provide a medical certificate, attesting that the child is critically ill.

The Helping Families in Need Act also amends the Employment Insurance Act to allow insured persons who fall ill or are injured while receiving EI parental benefits to qualify for EI sickness benefits despite not being “otherwise available for work” or, for self-employed persons, “otherwise be working”. These regulatory amendments will come into effect at the same time as the EI PCIC benefits. Future reports will analyze the impact and effectiveness of the Helping Families in Need Act.

The following sections do not include data on maternity and parental benefits in Quebec, for either employees or self-employed individuals, as these benefits are offered under the Quebec Parental Insurance Plan (QPIP). Data on sickness and compassionate care benefits in Quebec are included in their respective sections. 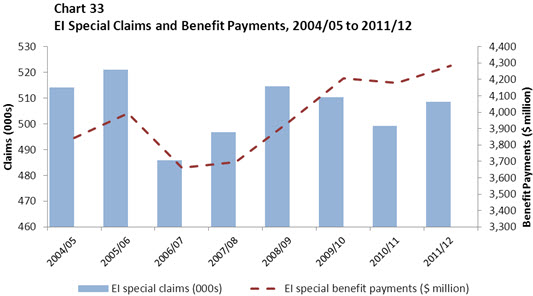 As of January 31, 2010, EI special benefitsâ€”including maternity, parental, sickness and compassionate care benefitsâ€”were extended to self-employed people, who could opt into the EI program for the first time. Benefits were payable as of January 1, 2011. Footnote 90

As of March 31, 2012, there have been 37 parental claims resulting from this EI initiative: 28 from Ontario, 7 from Manitoba and 2 from the Atlantic provinces. Canadian Forces members residing in Quebec can apply for parental benefits under the QPIP.

Analysis based on the Survey of Labour and Income Dynamics (SLID) suggests that an estimated 90.8% of employees would have had sufficient hours (600 hours) to qualify for special benefits in December 2010, had they applied for them at the time. This eligibility rate is slightly lower than it was in December 2009 (91.0%) but follows the trend that has seen eligibility for special benefits remain consistently over 90% for the past few years.

There is little provincial variation in eligibility rates for special benefits. Newfoundland and Labrador had the highest access rate, with 92.6%, while British Columbia had the lowest rate, at 89.1%. This suggests that the 600-hour eligibility threshold for special benefits is equitable, regardless of the regional unemployment rate insured workers face.

Different types of special benefits can be combined within a single claim, under certain circumstances, to a potential maximum duration of 71 consecutive weeks. Footnote 92

The Premium Reduction Program (PRP) reduces EI premiums for employers if their employees are covered by a short-term disability plan that meets or exceeds certain requirements set by the EI Commission. To be eligible, employers must show how they return the employee share of the premium reduction to workers.

In 2011, there were 34,300 employers participating in the PRP, and the insurable earnings of employees who were eligible for premium reductions were $238.1 billion, or 49% of total insurable earnings in Canada. In 2011, participating employers received a total of $882 million in premium reductions, representing 4.4% of annual gross EI premiums. Footnote 94

For assessment purposes, various time periods in EI administrative data are used to ensure accuracy in the analysis of the duration of EI special benefits. To assess the average duration of EI parental benefits, only claims established in the first half of 2011/12 are used, to ensure data are based on as many completed EI parental claims as possible. Given the shorter duration of maternity benefits, all claims established in 2011/12 are used.

Maternity claims decreased in most provinces, with the sharpest decreases in Nova Scotia (-5.4%) and Manitoba (-4.2%). The two provinces with the largest increases in the number of maternity claims were Prince Edward Island (+20.8%) and Newfoundland and Labrador (+10.4%).

The majority of provinces saw a decline in the number of biological parental claims in 2011/12 compared with the previous year, with the sharpest decreases in Manitoba (-3.2%) and Alberta (-2.3%). However, Prince Edward Island (+20.8%) and Newfoundland and Labrador (+17.3%) showed large increases in 2011/12, similar to the large increases in maternity claims.

The proportion of fathers who claimed or intended to claim parental benefits decreased to 29.3% in 2011 from 29.6% in 2010. However, this proportion has nearly doubled since 2005, when 15.0% of fathers claimed or intended to claim parental benefits. This increase is attributed, in part, to the trend in Quebec following the introduction of the QPIP on January 1, 2006. The proportions reported above originate from the EICS and include parents in Quebec receiving benefits from the provincial program. 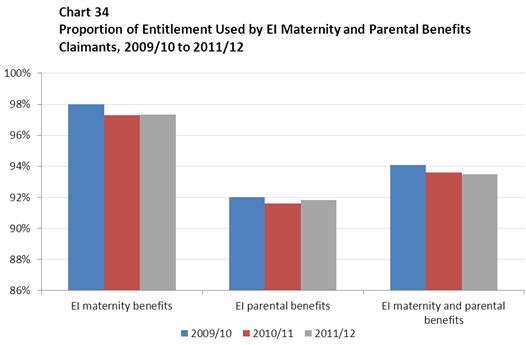 The average duration for parental benefits, as calculated on a per-claim basis, was 29.6 weeks for biological parents and 25.1 weeks for adoptive parents in 2011/12.

EI provides up to 15 weeks of sickness benefits to help claimants who are unable to work due to a short-term illness, injury or quarantine.

Six provinces saw an increase in the number of sickness claims in 2011/12, with the sharpest increases in Newfoundland and Labrador (+7.4%) and Prince Edward Island (+5.7%). However, four provinces showed a decrease, with Saskatchewan (-6.0%) and New Brunswick (-1.8%) showing the sharpest decreases.

The EI program provides six weeks of EI compassionate care benefits (CCB) to persons who have to be away from work temporarily to provide care or support to a family member who is gravely ill with a significant risk of death.

In June 2006, a regulatory change broadened the eligibility criteria to allow siblings, grandparents, grandchildren, in-laws, aunts, uncles, nieces, nephews, foster parents, wards and any other individuals considered family members by the gravely ill personâ€”or his or her representativeâ€”to be eligible for compassionate care benefits. Administrative data show that the broadened eligibility resulted in additional applications in 2010/11 (the “other” and “sister or brother” categories in Table 14), representing approximately 11.3% of all compassionate care benefit applicants. Since the implementation of the broadened eligibility criteria, both the number and proportion of applicants who fall into these two categories have been increasing every year.

For fishers, access to the new PCIC benefit will be based on the rules for existing EI special benefits for fishers (sickness, maternity, parental and compassionate care).

Data on the duration of parental benefits cover claims that began during the first half of 2011/12 to ensure data are based on completed claims. This analysis also assumes that the same number of men and women share the parental benefits available to them.

Figures presented in Annex 2.11 and 2.12 are still presented on a per-claim basis to permit year-over-year comparisons.