The Privacy Act (R.S.C. 1985, c. P-21) came into force on July 1, 1983. The Act governs how the federal government may collect personal information, restricts the use and disclosure of this information, and gives individuals a right to review and correct their personal information. Section 72 requires every head of a federal government institution to submit a report to Parliament on the administration of the Act within their institution during the fiscal year.

This report is submitted in accordance with section 72 of the Act. It presents an overview of activities related to the Privacy Act carried out within Environment Canada during the reporting period April 1, 2013 to March 31, 2014. Further, since the Canada Emission Reduction Incentives Agency was not operational during this reporting period, an Agency report will not be prepared for this period.

The ATIP Secretariat directs all activities within Environment Canada relating to the administration, application and promotion of the Privacy Act and the Access to Information Act. It provides advice to senior management on the implementation of the statutes and prepares reports to Parliament, the Treasury Board Secretariat and senior management. The ATIP Secretariat represents the Department in complaints and investigations conducted by the Information Commissioner and Privacy Commissioner of Canada, and in any Federal Court applications arising from ATIP matters.

In 2013-2014, Environment Canada began developing and implementing a new ATIP Office organizational structure in order to improve capacity and meet future needs. This work will conclude in 2014-2015.

Environment Canada remains committed to recruiting, training and maintaining a workforce that possesses specialized skills and that will continue to provide the best possible service to both internal and external clients.

Environment Canada is continuing to focus on developing capacity through its ATIP Professional Development Program. The program aims to train employees over a period of three to five years through a combination of competency-based training, professional development training and work assignments. Candidates enter the program at the PM-01 or PM-02 level and graduate as Senior ATIP Advisors at the PM-04 level. Current participants are progressing through the program with additional recruitment planned.

The Professional Development Program is enabling the ATIP Secretariat to better manage increasing workloads while facilitating succession planning through the transfer of corporate memory. The program also encourages staff to remain with the Department for a longer period of time.

In addition, Environment Canada’s ATIP Secretariat engaged in a number of staffing activities throughout the year in an effort to maintain the Department’s capacity in the face of increasing workloads.

Decision-making responsibility for the application of the various provisions of the Privacy Act has been formally established and is outlined in the departmental Delegation of Authority Instrument. The current Designation Orders were approved by the Honourable Leona Aglukkaq,Minister of the Environment, on September 17, 2013. A copy of the designation order and the specific delegation notes pertaining to the Privacy Act are in Appendix B of this report.

Interpretation of the Statistical Report

Environment Canada’s Statistical Report on the Privacy Act is included in Appendix A of this report.

Environment Canada received 9 less requests under the Privacy Act in 2013–2014 than in the previous fiscal year; this represents a decrease of 31% in the number of privacy requests received.

The following graph displays the number of requests under the Privacy Act received by Environment Canada from 2008–2009 to 2013–2014. 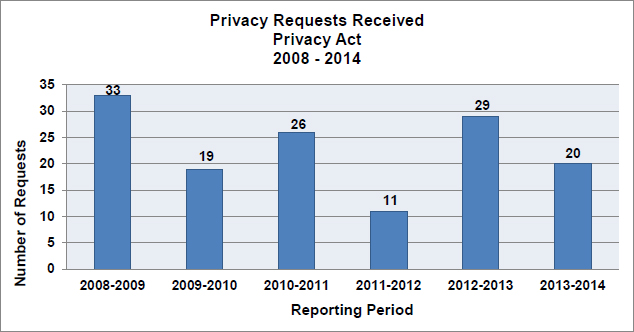 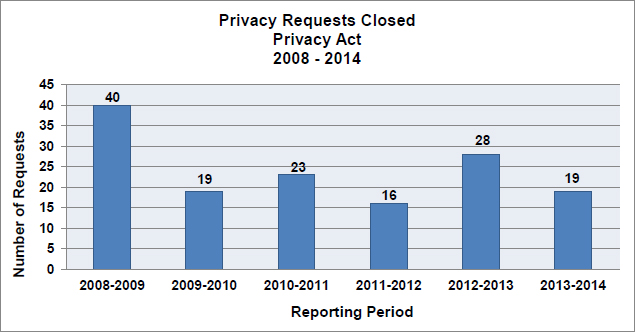 The following graph shows the number of pages reviewed by the ATIP Secretariat in processing requests under the Privacy Act from 2008–2009 to 2013–2014. 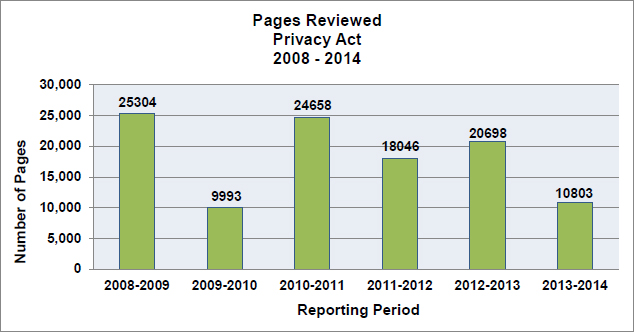 The number of pages reviewed in response to privacy requests during the 2013–2014 reporting period decreased: 10,803 pages were processed compared to 20,698 during the previous period. This is a decrease of 48%.

The following graph shows the number of pages disclosed by the ATIP Secretariat in processing requests under the Privacy Act from 2008–2009 to 2013–2014. 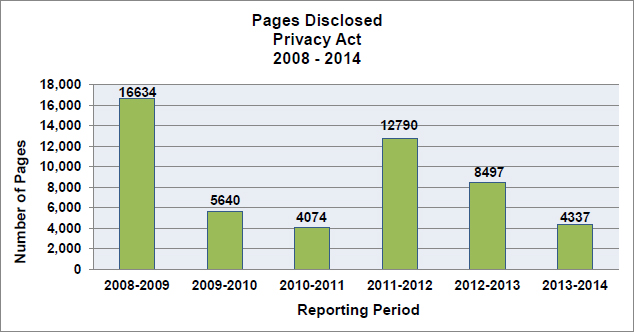 Subsection 12(2)(a) of the Privacy Act gives individuals a right to request a correction of personal information about them held by the federal government.

No corrections were requested or made in the 2013–2014 reporting period.

Paragraphs 8(2)(e), (f), (g), and (m) of the Privacy Act permit the disclosure of personal information to various investigative/regulatory bodies or to Members of Parliament, or if disclosure is in the public interest.

In 2013–2014, Environment Canada received 10 privacy consultations from other government institutions and organizations. All of the consultations were completed during the 2013–2014 reporting period.

Environment Canada’s access to information policy framework was approved in November 2012. The ATIP Secretariat is continuing to develop additional procedural guidance documents to assist departmental employees in responding to requests under the Access to Information Act.

As a result of the Treasury Board Secretariat recent updates to the ATIP Policy Suite, Environment Canada will initiate a review of its policy documents in 2014-2015.

Info Source is a series of publications containing information on the Government of Canada and on the government’s data collection activities. Info Source is intended to help the public access government information and to exercise their rights under the Privacy Act and Access to Information Act.

In order to facilitate public access to information and to comply with the Act, the Environment Canada Library has been designated a public reading room. The Library is located on the 1st floor of the Place Vincent Massey Annex, 351 St. Joseph Boulevard, Gatineau, Quebec.

During the 2013-2014 reporting period, Environment Canada joined the Treasury Board Secretariat Online Request Service Pilot Project. This initiative aims to make the process of requesting government records simpler and more convenient by enabling Canadians to submit their ATIP requests and application fees online. The department is scheduled to begin receiving online requests in April 2014.

The Department did not undertake any new internal or external data sharing activities in 2013–2014.

To fulfill its mandate, some of Environment Canada’s responsibilities require the collection, use and disclosure of personal information. As a trusted custodian of this information, the Department uses Privacy Impact Assessments (PIAs) in accordance with Treasury Board policy, as a risk management tool. Although Environment Canada did not initiate any Privacy Impact Assessments during the reporting period, the ATIP Secretariat, regularly provides advice to departmental employees on privacy matters.

During the 2013–2014 reporting period, there was one complaint filed against Environment Canada with the Office of the Privacy Commissioner. This complaint was closed during the reporting period and deemed well founded – resolved without recommendation. No complaints were carried over from the previous reporting period.

2.5.2  Relevant pages processed and disclosed by size of requests

Part 4: Requests for correction of personal information and notations

Part 6: Consultations received from other institutions and organizations

6.2  Recommendations and completion time for consultations received from other government institutions

6.3 Recommendations and completion time for consultations received from other organizations

The Minister of the Environment, pursuant to section 73 of the Access to Information Act and section 73 of the Privacy Act, hereby designates the persons holding the positions set out in the schedule hereto, or the persons occupying on an acting basis those positions, to exercise the powers, duties and functions of the Minister of the Environment as the head of Environment Canada, under the provisions of the Act and related regulations set out in the schedule opposite each position. This designation replaces all previous delegation orders.

Dated, at the City of Gatineau, Quebec, this 17th day of September 2013

Leona Aglukkaq
Minister of the Environment