Compliance promotion relates to the planned activities that are undertaken to increase awareness, understanding and compliance with the law and its regulations. Through these activities, compliance promotion officers provide information to regulated communities on what is required to comply with the law, the benefits of compliance and the consequences of non-compliance. The goal is to achieve desired environmental results more efficiently.

CEPA provides enforcement officers with a wide range of powers to enforce the Act, including the powers of a peace officer. Enforcement officers can carry out inspections to verify compliance with the Act; conduct investigations of suspected violations; enter premises, open containers, examine contents and take samples; conduct tests and measurements; obtain access to information (including data stored on computers); stop and detain conveyances; search, seize and detain items related to the enforcement of the Act; secure inspection warrants to enter and inspect premises that are locked and/or abandoned or where entry has been refused; seek search warrants; and arrest offenders. CEPA analysts can enter premises when accompanied by an enforcement officer and can exercise certain inspection powers.

A wide range of enforcement measures are available to respond to alleged violations. Many are designed to achieve compliance without resorting to a formalized legal process such as prosecutions or seeking an injunction. These measures include directions, tickets, prohibition orders, recall orders, detention orders for ships, and environmental protection compliance orders. Measures to compel a return to compliance through court action include injunctions to stop or prevent a violation and prosecutions. In addition, once charges have been laid, environmental protection alternative measures agreements may be negotiated with the alleged offender in lieu of pleading guilty.

ECCC delivered compliance promotion activities for new and existing regulations and codes of practice under CEPA.

Multiple approaches were used to reach the regulated communities, including workshops, information sessions, presentations, information package emails/mail-outs and through technology such as videos, Twitter and Web banner advertising. Many of these activities were carried out in collaboration with provincial and territorial governments, as well as non-governmental organizations.

Promoting Compliance to Indigenous People and within the Federal Government 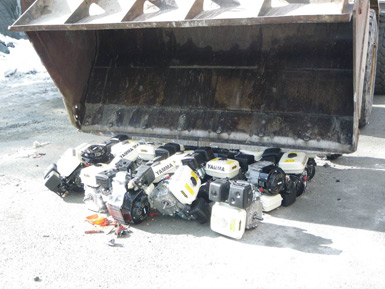 There are six RegulationsFootnote3 covering on-and off-road vehicles and engines that apply to manufacturers in Canada and to persons importing prescribed products into Canada. During 2015-2016, regulatory program officers received over 750 technical inquiries from regulatees and prospective regulatees seeking clarifications related to the transportation sector regulations.  Additionally, mail outs are regularly used to remind regulatees of forthcoming reporting deadlines. Supplemental guidance was posted to inform regulatees of the process related to informing the Department and owners of an emissions-related defect / recall.

Multi-instrument compliance-promotion activities provide an opportunity for stakeholders to obtain information regarding Acts and risk management instruments affecting their activities, in an efficient and effective way. Regulatees also benefit from the knowledge and experience of the on-site compliance promotion officers, the distribution of printed materials on the legislation, and the identification of contacts for further inquiries. In 2015-2016, ECCC reached small and medium-sized enterprises through over 45 campaigns on the 14 compliance promotion priority regulations, through multi-instrument activities, and on a per regulation basis.

In order to bring awareness to importers of products containing mercury, the Department provided an information package developed to provide specific information and present the benefits of engaging with ECCC, to around 2,000 potential importers in the regulated community.  Additional efforts undertaken in British Columbia and Yukon to provide personalised information in the packages resulted in a 50% response rate from importers. The information garnered from the responses received and follow-up conversations has enabled ECCC to further its understanding of this community and will enable the Department to provide tailored information for the importer sector, when promoting compliance with the Products Containing Mercury Regulations. This importer engagement work also resulted in some reaction in the Twittersphere, leading some customs brokers and freight companies to tweet some of the Department’s information to their clients.

Each year, ECCC develops a National Enforcement Plan (NEP) that sets out the enforcement activities to be carried out in that fiscal year, including activities to address non-compliance with CEPA. Factors that influence the identification of priority activities include the risk to the environment and human health represented by the regulated substance or activity, suspected non-compliance issues, recent publication of new and amended regulations, operational complexity and capacity, and domestic and international commitments and obligations.

In 2015-2016, the NEP projects and priorities were carried out under the following CEPA instruments:

The number of planned inspections carried out under the NEP is supplemented by a large number of unplanned inspections resulting from responses to complaints, notifications from partners, intelligence or departmental referrals, reported spills and incidents, or other information. In addition, a number of regulations are identified for focus by specific regions. The focus placed on regulations in each region is influenced by a number of factors, including geography, the prevalence of the regulated sectors, region specific issues or concerns, and provincial and territorial environmental sensitivities.

Enforcement activities undertaken during 2015-2016 are summarized in the following four tables.

Inspections are defined as the active process of gathering information to verify compliance with legislation. This may include site visits, examining substances, products or containers, taking samples, and analyzing records. An on-siteinspection involves visiting a site, a border crossing, an airport or a port of entry, to conduct any activity/operation/analysis required to verify the regulatee’s compliance with a regulation or permit. An off-site inspection is normally undertaken at the officer’s place of work or in another location that is not at the regulated site and is usually limited to documentation verification.

Only those regulations under which an inspection occurred during the time period are listed in this table.

An investigation involves gathering, from a variety of sources, evidence and information relevant to a suspected violation. An enforcement officer will conduct an investigation when he or she has reasonable grounds to believe that an offence has been committed under the Act and authorities have determined that prosecution may be the appropriate enforcement action.

Table 15 describes the number of investigations under CEPA for fiscal year 2015-2016.

The following responses are available to address alleged violations of CEPA and its regulations:

Table 16 sets out the number of enforcement measures under CEPA for fiscal year 2015-2016.

Directions, written warnings, and EPCOs are tabulated by infractions, which are found at the section, subsection or paragraph level of a regulation. For example, if the outcome of an inspection is the issuance of a written warning that relates to three sections of a given regulation, the number of written warnings is three, even if a single letter was sent to the regulatee.

In 2015-2016 there were no injunctions and no ministerial orders (recall orders and prohibition orders); therefore these columns do not appear.

For reporting purposes, prosecutions are all instances in which charges were laid against a person (individual, company, or government department). The decision to prosecute is made with due consideration of the factors set out in the Compliance and Enforcement Policy for CEPA (1999) and ultimately rests with the Director of Public Prosecution (DPP) of Canada. While reviewing the data, it should be noted that prosecutions often continue through multiple fiscal years, so there may be more counts tabulated during a particular year than actual charges laid.

Tickets can be issued under CEPA, usually where there is minimal or no threat to the environment or human health. Where an offence is designated as ticketable, enforcement officers will issue a ticket, unless they have determined that, in accordance with the criteria of the Compliance and Enforcement Policy for CEPA (1999), a warning is the appropriate response.

An Environmental Protection Alternative Measure (EPAM) is an agreement that is negotiated in order to return an alleged violator to compliance with CEPA. It can be used only after a charge has been laid and before the matter goes to trial as an alternative measure to prosecution for an alleged violation of the Act.

Table 17 outlines the number of prosecutions, tickets, and EPAMs under CEPA for fiscal year 2015-2016.

Counts are the number of sections of legislation or regulations, for which there was a charge or conviction during the reporting period. For example, if one person is charged with two counts under CEPA, this is considered one charge laid against the subject and two counts.

Convicted subjects are the number of subjects convicted during the reporting period and are based on date sentenced.

EPAMs are counted by the number of charges laid before entering the alternative measures agreement.

The Storage Tank Systems for Petroleum Products and Allied Petroleum Products Regulations establish technical standards for the design and installation of storage tank systems in order to reduce the risk of contaminating soil and groundwater as a result of spills and leaks of petroleum products and allied petroleum products from storage tank systems.

In 2014, 331 petroleum products storage tank systems were identified as being at high risk of leaking and contaminating soil and groundwater. A project was launched to address the issue. At the end of March 2016, 86% (283 systems of 331) had been inspected. Of those, 60% (169 of 283) were either in compliance with the regulations, or had returned to compliance. During the reporting period, 40 written warnings and 33 environmental protection compliance orders were delivered under this project. The work continues to ensure the remaining systems will be inspected and returned to compliance by the end of 2017.

PCBs are persistent, toxic substances that pose a risk to human health and the environment; and are therefore on the List of Toxic Substances in Schedule 1 of CEPA. The PCB Regulationsset specific deadlines for ending the use of PCBs in concentrations at or above 50 mg/kg, eliminating all PCBs and equipment containing PCBs currently in storage, and limiting the period of time PCBs can be stored before being destroyed.

Equipment with PCB concentrations greater than 500 mg/kg, were set to be removed from service and sent to be destroyed by December 31, 2014. In 2015-2016, inspections were conducted at 44 companies to ensure that this equipment had been removed and destroyed or on its way to being destroyed. By March 2016, confirmation had been received regarding the removal and destruction of equipment at 89% of the facilities. Follow up will occur in fiscal year 2016-2017 to ensure compliance with the regulations at the remaining facilities.

Since 2012-2013, ECCC has been working on a compliance rate project for tetrachloroethylene. In 2012-2013, inspections were conducted at 216 facilities, and the compliance rate with the environmental provisions of the regulations was found to be 51%. The project’s objective was a ten percent increase from 2012-2013 levels. In 2013-2014 and 2014-2015, the Department conducted an intensive campaign to increase regulatees’ awareness of the regulations.

In 2015-2016, 325 facilities were inspected. The result was a 63% compliance rate with the environmental provisions of the Regulations, yielding an increase of 11%.

Enforcement-related activities are carried out under various international and domestic agreements and organizations. ECCC actively participates in INTERPOL’s Pollution Crime Working Group, which brings together member countries to work collectively on pollution crime issues. ECCC also engages in cooperative activities with its counterparts at the U.S. Environmental Protection Agency (EPA) and Mexico's PROFEPA (Federal Attorney for Environmental Protection) and SEMARNAT (Secretariat of Environment and Natural Resources) under the umbrella of the Commission for Environmental Cooperation’s Enforcement Working Group (EWG). In addition, ongoing bilateral cooperation between the U.S. EPA and ECCC Enforcement supports both countries’ domestic mandates, particularly in the area of cross border environmental crime.