Lead is the most common material used for wheel balancing, accounting for about 72% (i.e., 3675 tonnes) of the Canadian wheel weight market in 2011. 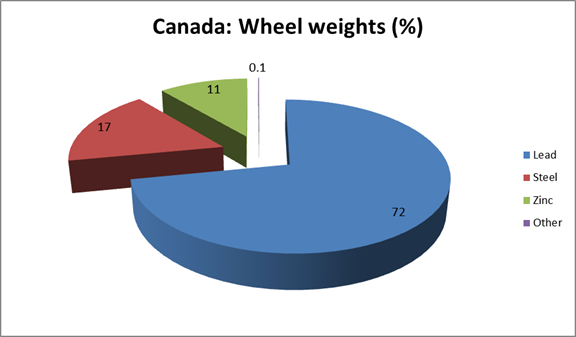 Automotive manufacturers are no longer installing lead wheel weights on new cars in Canada, since 2008.

Due to their value, automotive dismantlers and recyclers typically remove lead wheel weights and sell them to a scrap broker/aggregator for profit. It is estimated that automotive dismantlers and recyclers removed about 245 tonnes of lead wheel weights from cars in 2011. However, there is an uncertainty associated with their procedures in this regard, due to the current lack of regulation and licensing for this sector (e.g., many facilities in this sector do not operate under any environmental management system). As such, the fate of lead wheel weights in some of these facilities is unknown.

An increasing presence of wheel weight alternatives has caused some technical issues for secondary smelting. In fact, since the melting points of lead and zinc are similar, they are therefore difficult to separate during smelting. As a result, lead recovery rates have decreased (e.g., recovery rates for lead wheel weights were 80-90% before the introduction of zinc and steel wheel weights, but now average 65-75%).