Overall, the Great Lakes basin experienced dry and cool conditions during spring 2015. The dryness was most prominent in March and April and drought conditions spread throughout the basin. However, May did bring some precipitation and drought relief to most areas in the basin.

Water supplies in the Lake Ontario basin in March were near record lows for the second straight month, delaying the typical seasonal lake level rise. In combination with the generally dry conditions that followed, Lake Ontario experienced well below average water levels in April and May and by the end of May was 18 cm (7.1 in) below average - the lowest it’s been since 2010. Water supplies were closer to normal on lakes Superior, Michigan-Huron, and Erie over the quarter, and water levels continue to remain above average for those lakes.

The last two winters (2013/14 and 2014/15) were the first time since the 1970s there has been two consecutive years where at least three of the Great Lakes were more than 95% ice covered. Also, ice was present late into the season on some lakes. Ice cover on Lake Superior lingered until May 28, which is only the 4th time in the 40 year period of record that ice cover has remained on Lake Superior through late May.

A strong low pressure system brought unseasonably cold temperatures into the basin from May 19-23. Some locations across Ontario, northern Minnesota, Wisconsin, and Michigan experienced freezing temperatures - some as low as -5.5°C (22°F) - resulting in significant vegetation damage in some areas. Just days prior, this same system brought freezing precipitation and snow to areas in Ontario. While snowfall totals were not substantial, some areas reported several hours of freezing precipitation during this late season winter like storm.

Regional Climate Overview - for March - May 2015 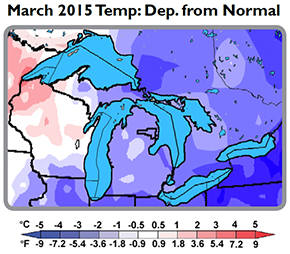 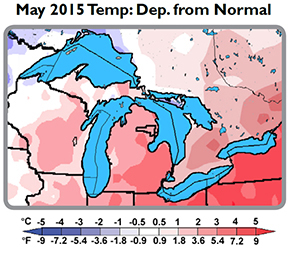 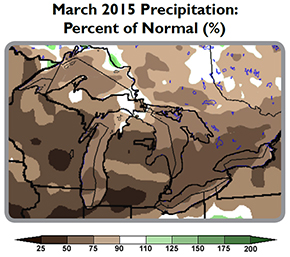 The opening of the Lake Ontario to Montreal section of the St. Lawrence Seaway was delayed until April 2 due to extensive ice cover, completing the full Seaway opening about one week later than normal and the latest since 1997. In fact, despite the locks on the St. Marys River opening on March 25 as planned, the navigation season generally started slowly across the Great Lakes region, and for the second straight year the shipping industry relied heavily on the U.S. and Canadian Coast Guards to clear shipping lanes of ice early in the season. The most notable example occurred during the first week of April, when a clog of vessels sat for days in Whitefish Bay in eastern Lake Superior until a heavy ice-breaker from Montreal arrived to help clear pathways through a large ice field.

The extensive ice cover on the Great Lakes delayed the commercial fishing season - a $100 million industry for the Great Lakes - by a few weeks this March for the second year in a row. Ideally, the boats like to be out in early March to keep up with the fish demand during Lent but were delayed this year until the end of March.

Freeze events from May 19-23 caused significant crop damage in Michigan, particularly across the northwest portions of Lower Michigan where temperatures fell as low as -5°C (23°F). The most severe damage occurred to vinifera grapes, with some growers reporting no remaining live shoots. This is the second consecutive season grape growers in this region had major crop losses. Other crops with significant damage in Michigan were blueberries, sweet and tart cherries, peaches, and apples. Minor damage was also reported in Ontario to vinifera grapes, corn, soybeans, and strawberries. While the dry spring conditions were favorable for spring planting operations, the overall dry conditions throughout much of the spring could negatively impact crop germination and plant growth in crops.

The dry conditions extending from winter into spring produced an active fire season over portions of the basin the last three months, especially over Minnesota and Lower Michigan. The largest fire in Minnesota was the Palsburg Fire, which began on April 15 and burned approximately 6,000 acres primarily in Beltrami Island State Forest. Smaller fires in Minnesota resulted in evacuations of nearby homes, businesses, and schools.

Water levels typically peak in the summer months before beginning to decline at the end of summer as water supplies to the lakes tend to decrease, mainly due to increaseing evaporation and reduced runoff. Current projections from July to September show above-average water levels for lakes Superior, Michigan-Huron and Erie unless exceedingly dry conditions are experienced. Lake Ontario is projected to be near or slightly above average this summer unless exceedingly wet or dry conditions are experienced.

The harmful algal bloom (HAB) season in western Lake Erie peaks annually in late summer. The severity of HABs is dependent on phosphorus inputs from March 1-July 31 (the “loading season”). Based on data from March 1-June 15, the extensive severe HABs observed in 2011 and 2013 are not projected to occur this year. Conditions can change quickly, so this HAB outlook is updated weekly with the latest information. On July 9, NOAA will officially announce the predicted western Lake Erie HAB extent for 2015. Resource and public health managers can use these outlooks to deal with the toxic blooms, which affect human and animal health.