Atmospheric drivers such as El Niño and the Arctic Oscillation played a role in the region’s mild and stormy weather this winter. Numerous significant storms impacted the region, with four of the most powerful described below. There were two main storm tracks: an offshore track near Massachusetts and Nova Scotia and a track northwest of Maine and New Brunswick. 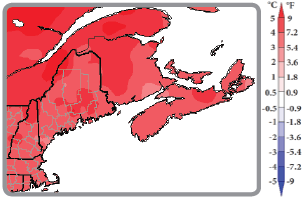 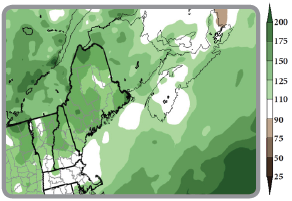 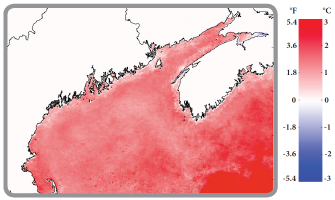 Winter sea surface temperature anomalies in the Gulf of Maine were substantially warmer than the winter long-term average over the entire study area. Temperatures over coastal areas of Maine, New Brunswick, and Nova Scotia were 0.5°C (1°F) to 1.0°C (2°F) above normal. Off the coast of Massachusetts, temperatures were up to 2°C (4°F) above normal. Temperatures were 1.0°C (2°F) to 2.0°C (4°F) warmer than normal over deeper basins in the central Gulf of Maine and the entire Scotian Shelf. These warm anomalies continue a region-wide continuous warm surface ocean period that began in September 2015.

An ice jam in mid-February caused flooding along the Kennebec River in Augusta, ME. Ice out on the lower part of the river was earlier than usual. Courtesy: U.S. Geological Survey

Mild temperatures during winter had numerous impacts. Some U.S. golf courses saw an increase in business in December, while a few Maritime courses opened earlier than usual this spring. Business slowed for winter recreation venues and winter gear retailers. In fact, several ski resorts opened late or had limited trails open. The Mount Washington Auto Road in New Hampshire opened for guided auto tours in late December for the first time in (at least) 35 years. In the U.S., the warmth allowed some crops to be harvested later into December, but caused other plants to bloom early. The warm temperatures also caused maple sap to start flowing, leading to an early start for syrup production. In early February, ice development around Prince Edward Island (P.E.I.) was about three weeks behind normal, which was good for marine shipping. Outdoor ice rinks in Charlottetown and Stratford, P.E.I., were closed in early February, while only one of eight rinks in Fredericton, NB, was operating. The above-normal temperatures left many lakes and waterways unfrozen or with unsafe ice conditions. Several ice fishing tournaments were cancelled or postponed in New Hampshire and Maine. Ice on the Saint John River at Fredericton broke up on February 21, which was the second earliest break up since 1825. In the three states, transportation departments performed roadwork and continued construction projects longer into the season, as well as saved money on snow removal, fuel, and personnel costs. Home heating costs were also down, in part due to the warm weather. 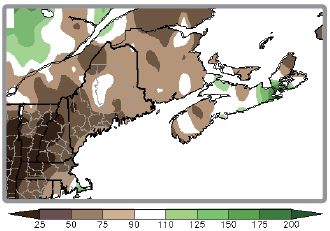 Percent of normal snowfall for winter (accumulated from December to February).

While sea surface temperatures in the equatorial Pacific Ocean peaked in late 2015, atmospheric and oceanic observations during February indicated that the strong El Niño event continues. El Niño conditions and impacts will weaken during spring, with a transition to ENSO-neutral conditions by early summer. An El Niño is frequently followed by a La Niña. Most computer models indicate a transition to La Niña is somewhat likely by winter 2016-17. (Above graphic courtesy: International Research Institute for Climate and Society/NOAA).

The potential for river flooding during spring is near to below normal for most of New England. In mid-March, river levels and soil moisture were near to above normal, but snowpack and snow water equivalent were below normal. In northwest Maine, where snowpack and river ice lingered, the river flood and ice jam flood potential is near to above normal. Very heavy rain can cause flooding at any time of the year, even in areas that have little to no snow on the ground.

For March through May, NOAA’s Climate Prediction Center and Environment and Climate Change Canada are both calling for an increased chance of above-normal temperatures for the entire Gulf of Maine region. Both groups are predicting equal chances of below-, near-, or above-normal precipitation in the region for spring. 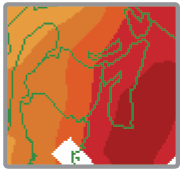 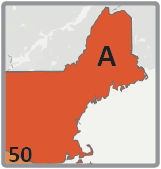 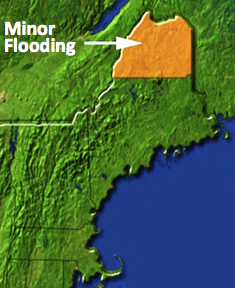