The weather in the tropics is hot and humid because the earth there receives more solar energy than it sends back to space. This over-heating makes weather that can affect any place in the world. It's this difference in energy that helps drive the flow of the atmosphere.

There is plenty of rainfall in the tropics because the heat of the sun causes air to rise. At certain times of year, showers and thunderstorms can occur every day. The high temperatures in the tropics (usually between 22° and 35°C) are steady throughout the year, with very little change. Therefore, tropical seasons aren't defined by periods of warm and cold as they are in Canada. Instead, the seasons in these warmer climates are distinguished by changes in rainfall and cloudiness.

These hot, humid conditions over tropical oceans are the main ingredients needed for tropical cyclones to form. A tropical cyclone is a storm system that has a low-pressure centre and thunderstorms that produce strong winds and flooding rain. These storm systems range in intensity from tropical depressions, which have winds below gale strength (less than 63 km/h), to intense hurricanes and typhoons, which can have winds exceeding 250 km/h. All of them can have devastating rainfall accumulations of hundreds of millimetres happening at fast rates; rainfall rates of 25-50 mm/hr are not uncommon. In addition to the wind and rain, tropical cyclones can also produce high waves and damaging storm surge. They can even spawn tornadoes.

The ferocity of these storms is behind the origin of the word hurricane. “Hurricane” stems from the word “hurican,” the Carib Indian god of evil, which itself comes from the Mayan god Hurikan, one of their creator gods. In essence then, “hurricane” means “evil wind” . Anyone who has experienced the wind, rain, storm surge and ocean waves in one of these storms will probably agree with the meaning behind the name. 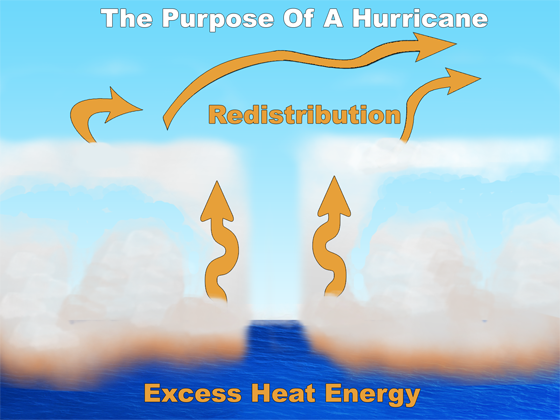 This graphic illustrates how a hurricane redistributes heat in the atmosphere.
Photo: Environment Canada © 2009

It may be surprising to learn that hurricanes aren’t all bad. In fact, climate scientists have speculated that hurricanes may serve an important function of redistributing built-up heat energy in equatorial regions and shunting it toward the poles as the storms drift to higher latitudes. The degree to which these storms help the global heat budget is uncertain, but an average of 80-85 of them annually perform this role.