Kangaroo rats also use sandy areas where the soil is disturbed by human activities (Nero and Fyfe 1956, Smith and Hampson 1969, Kaufman and Kaufman 1982, Stangl et al. 1992, Gummer 1997a, Gummer 1999, Bender et al. 2005). These anthropogenic habitats include roads, trails, fireguards, bare ground associated with oil and gas fixtures, heavily grazed pastures or trails, and the margins of cultivated agricultural lands. It appears that anthropogenic habitats are low quality, “sink” habitats in which mortality exceeds recruitment, and this is the subject of current research (Bender et al. 2005, Gummer unpubl. data).

The primary natural habitat of kangaroo rats is active dunes, which are sensitive to both climatic change and human land-uses (Wolfe and Nickling 1997, Wolfe et al. 2001). Sand hills on the southern prairies are becoming increasingly stabilized by vegetation. Climatic factors, particularly moisture conditions, are cited as major drivers (David 1993, Wolfe et al. 1995, Wolfe et al. 2000). Whether human land-use practices increase stabilization has not been well studied, although humans have influenced the natural disturbance regimes, particularly fire and the effects of large grazers such as bison.

Figure 5: Observed Rates of Decline (diamonds) and Estimated Trend (squares) in the Area of Bare Sand Associated with Active Dunes in the Middle Sand Hills, Alberta, According to Analysis of Historical Aerial Photographs and Satellite Imagery 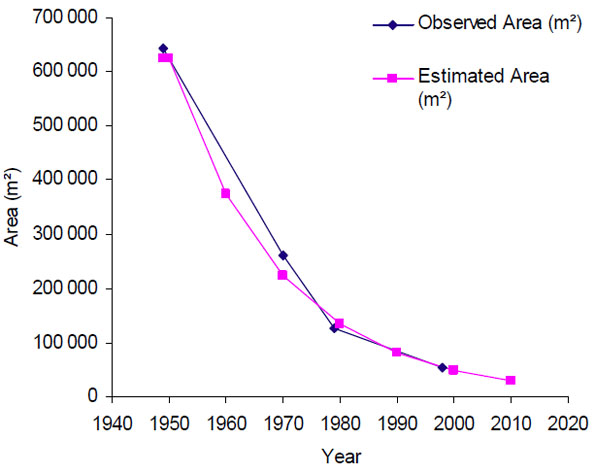 Wolfe et al. (1995) analyzed remote sensing imagery and land survey records dating to the late 1800s and found that sand dunes have been stabilizing since European settlement. Recently, Hugenholtz and Wolfe (2005) analyzed aerial photographs and demonstrated that the area of dunes in the Great Sand Hills and other regions has been decreasing since the mid-1900s. Vance and Wolfe (1996) and Muhs and Wolfe (1999) reported significantly less bare sand in the sand hills since the 1930s based on historical photos. Bender et al. (2005) quantified changes in the Middle Sand Hills from 1949 to 1998 using historical aerial photographs and multispectral satellite imagery. Exposed sandy areas have consistently declined at a average rate of 40% per decade (Figure 5). Analysis of individual dunes revealed that many were becoming completely stabilized by vegetation (no bare sand remaining) at a mean rate of loss of 7 dunes per decade (Figure 6), equating to 53% from 1995 to 2005. At this rate, all active sand dunes in the Middle Sand Hills will disappear by 2014.

Figure 6: Decline in the Number of Active Sand Dunes in the Middle Sand Hills, Alberta, According to Analysis of Historical Aerial Photographs and Satellite Imagery 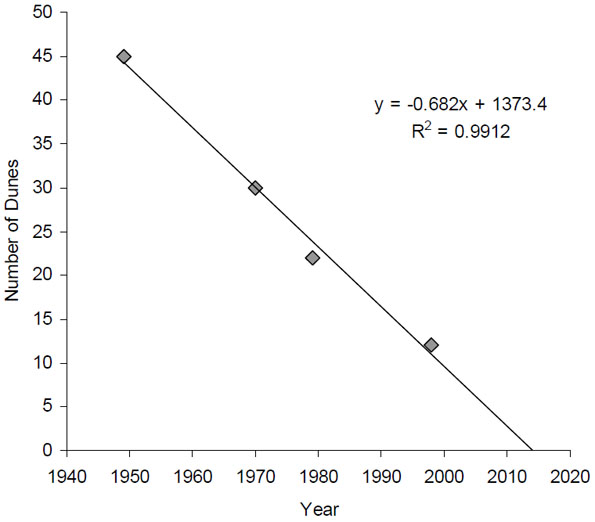 Bender et al. 2005. Trend line indicates the average rate of decline extrapolated to the year 2014 when no dunes are expected to occur on the landscape.

Land change analysis was also performed on a time series of multispectral satellite images (Landsat series) to evaluate changes in vegetation cover through time (Bender et al. 2005). This analysis demonstrated a 50% decrease in the proportion of bare sand from 1974 to 2001 and increasing shrub encroachment since 1974. Coincident with the marked decline in active sand dunes since 1949, there has been an increase in the area of anthropogenic habitats, specifically sandy roads, trails and fireguards (Figure 7). Much of this is associated with increasing numbers of oil and gas wells in the area (Figure 8).

Figure 7: Density of Linear Features, e.g., Roads, Trails and Fireguards, in the Middle Sand Hills Based on Analysis of Historical Aerial Photographs and Satellite Imagery 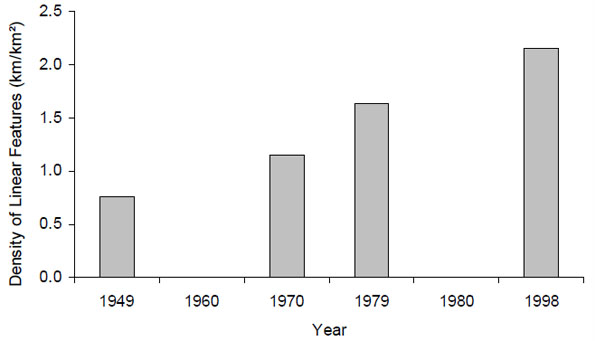 Figure 8: Density of Oil and Gas Well Sites in the Middle Sand Hills Based on Data from Ensight Corporation 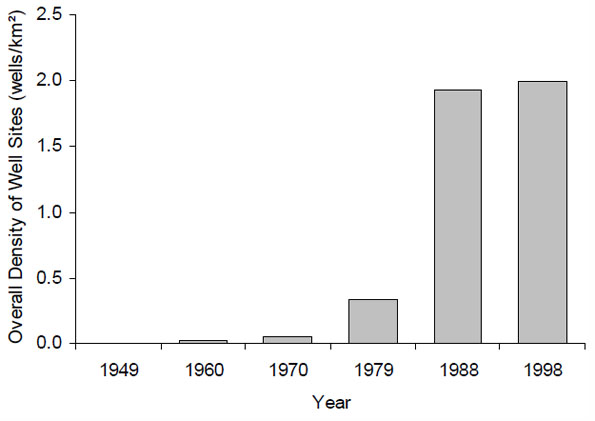 The majority of kangaroo rat habitat in Canada occurs on provincial lands leased for grazing cattle. Approximately 62% (3765 km2) of the Canadian range occurs in Saskatchewan (Figure 3), where at least 6% (of the Canadian range; 366 km2) is protected from cultivation and new industrial developments within the newly established Great Sand Hills Representative Area Ecological Reserve (Saskatchewan Environment 2005). The remaining 38% of the Canadian range is in Alberta, where the dens of kangaroo rats are protected under the Alberta Wildlife Act. Approximately 13% (811 km2) of the Canadian range occurs in Canadian Forces Base Suffield (Figure 3), which is owned by the federal Department of National Defence. CFB Suffield is managed primarily for live fire military training exercises, with secondary land-uses of oil and gas production and grazing managed by the Prairie Farm Rehabilitation Administration (PFRA). Within CFB Suffield, 6% of the Canadian range (376 km2) of the kangaroo rat is designated as a National Wildlife Area under the Canada Wildlife Act. Kangaroo rats are not known to occur on any Indian Reserves in Canada (Goulet pers. comm. 2005), nor any Parks Canada land (Achuff pers. comm. 2005).