A flood can be a terrifying disaster. People forced from their homes, their property destroyed, business disrupted industry closed down, crops ruined, roads washed out, railway links severed, and all too often, human lives lost.

Floods cost Canadians many millions of dollars every year -- in property damage, lost production, lost wages, and lost businesses. But dollars can't measure the distress, the strain and the heartbreak, that flood victims suffer. 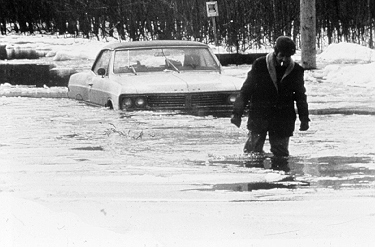 Then there's the cost of building and maintaining dykes, dams and other flood defenses. These can be enormously expensive -- and still they are no sure guarantee of protection. 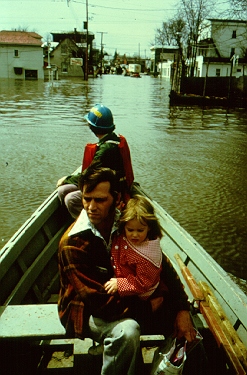 Children and the elderly are often identified as needing special attention after disaster strikes. In fact, anyone who has been acutely affected, such as those who have lost loved ones or their homes, needs help.

On April 15, 1987, after the Perth-Andover flood, the Emergency Measures Organization opened a Disaster Assistance Office, where victims could register and apply for assistance. The emergency measures officials discovered that some victims were so distraught they could not fill out forms.

While provinces have primary jurisdiction for responding to disasters, the federal Disaster Financial Assistance Arrangements can assist, if requested by the province or territory, should the cost of a disaster exceed that which a province can reasonably be expected to bear on its own. The federal financial contribution is determined according to a formula based on provincial population and federal guidelines for defining eligible costs.

Since 1970, federal financial participation in disaster assistance arrangements has been determined by a "dollar-per-capita" formula. The first dollar per capita of damages is a provincial/territorial responsibility. Damages beyond that threshold level are eligible for federal assistance with the federal proportion rising with the damage, as illustrated in the following table:

This table summarizes the dollar-per-capita formula used for federal cost sharing with the provincial government of damage caused by flooding.

Public Safety Canada administers the Disaster Financial Assistance Arrangements on behalf of the Government of Canada. PS regional offices assist with damage assessments, interpretation of the guidelines, general surveillance of private damage claims, and the development of joint federal-provincial teams to review claims for damage and recommend payments.

Generally, payments are made to restore public works to their pre-disaster condition and to facilitate the restoration of personal property of citizens, farmsteads and small businesses. Not all damages are eligible for cost-sharing. For instance, the program does not cover damages to large businesses, industries, crops, summer cottages or antiques. (A separate crop insurance plan operated by the federal and provincial governments is available to individual farmers for most crop-related losses.)

From 1970 to 1988, PS provided financial assistance for 33 flood disasters. Over this period, about $250 million (approximately $500.3 million in 1998 dollars), or about 75% of all natural disaster assistance, has been paid out to victims of major flood events by the federal and provincial/territorial governments, through cost-shared disaster assistance arrangements. This figure represents only a fraction of the true costs borne by individuals, businesses and industry, and provincial and municipal treasuries.

The Fraser River flood of 1948 forced the evacuation of some 16 000 people, and disaster assistance payments amounted to some $22 million. As a result of the 1950 Red River flood, governments contributed $25 million in disaster relief. In 1954, flood victims in Ontario received almost $25 million in assistance after Hurricane Hazel's destruction. In total, the immediate flood damage assistance throughout Canada up to 1970 had climbed above the $100 million mark. Since then, payments have continued to escalate.

This table contains additional information regarding federal payments made under Disaster Financial Assistance Arrangements for floods occurring since 1970.