On February 28, 2017, The Government of Canada announced the replacement of its weather-radar network. At that time, Canada’s radar network consisted of a mix of older radars including two radars operated in partnership with the Department of National Defence and one owned by McGill University. A contract was awarded to buy and install a total of 33 new radars across the country to replace the old network. This includes the addition of a radar in the Fort McMurray area of Alberta, expanding Canada’s operational radar network. Twenty-seven of the new S-band dual polarization radars have been completed to date, are available online and have been fully integrated into the forecasting process. It is expected that the last of the new radars will be available to the public by early summer 2023.

The first radar to be replaced was installed in fall 2017 at Radisson SK (near Saskatoon) and the other radars will be replaced at a rate of four to seven per year through March 2023. The replacement schedule for the radars will be posted here as it becomes available.

Several factors are taken into account to determine the radar replacement order and schedule. This includes:

System design and construction plans could also influence the decision-making process. Some radars, such as Mt Sicker (near Victoria BC) will be relocated to improve coverage or for operational reasons.

** Radar is for training and test purposes. Currently not operational/online.

These state-of-the-art radars will have fully integrated dual-polarization technology, which will enable forecasters to better distinguish between rain, snow, hail, and freezing rain as well as better discern the size, shape, and variety of precipitation particles. This technology will also enable better identification and removal of non-meteorological targets such as birds, bugs, and debris from the data. As a result, they will issue more precise and timely weather watches and warnings for these significant weather events, giving Canadians more lead time to take appropriate actions to protect themselves, their family, and their property from the effects of severe weather.

The new radars will also have an extended severe-weather detection range to cover more of Canada, increasing the Doppler range to 240 kilometres per radar from the current 120 kilometres. Doubling the Doppler range will give Canadians greater lead time to protect themselves and their families from tornadoes and other severe weather. Extending Doppler coverage of the weather-radar network will also allow for better overlap of neighbouring radars in case of an outage.

Economic sectors sensitive to weather events such as agriculture, natural resources, fisheries, construction, aviation, tourism, transportation, retail, and investors will benefit from higher data quality and consistency for severe-weather events as weather information is an important part of their strategic planning. For example, weather-radar imagery is used to help in safely routing planes around severe weather.

The improved weather-data quality will also allow for more effective use of the information in other areas, such as water management, as radar images are used to understand the effects of precipitation on drainage basins, in particular in support of flood forecasting by provinces. 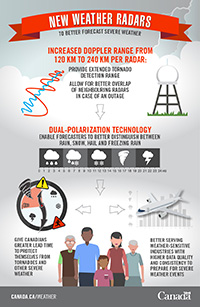 Before a new radar is commissioned, at some point the old radar will have to be turned off. As we do for regular maintenance and unexpected technical problems, we will continue to provide weather services by using data from neighbouring radars since, wherever possible, the coverage of the radars has been designed to overlap. Weather forecasters also use satellite images, surface weather stations, lightning detectors and sophisticated computer models to monitor severe weather conditions. The scheduling of radar replacements will take into account seasonal severe weather periods to ensure minimal disruption and every effort will be made to minimize downtime. We will continue to use the Status of Canadian Radar Network page to inform you.

The new weather radars comply with Health Canada’s Radio frequency exposure limits in all modes of operation. These guidelines are used to establish safe distances for radio frequency exposure to the general public. Compliance will be verified by a third party and must be demonstrated to Industry Canada before an operating license can be granted.

The radar structure is composed of an open lattice steel tower with a 12-metre diameter radome on top. The total height will vary from one site to another depending on the location and surroundings. Generally, the weather radars will be about 40 meters high or the equivalent of a 12-storey building.